Like many people, I've been closely following news of the European debt crisis. While no one knows what would happen if any European country actually defaults, speculation is rampant. However,  I haven’t come across any visuals that adequately show the scope of the situation and how one country's default would affect the rest of Europe and the UK. I decided to use JMP to see whether data visualization would help me understand the debt crisis better, and I did find it useful.

I started by looking at the crisis from the debtor country perspective.  The map below shows the countries, colored by the size of their debt relative to their Gross Domestic Product (GDP). Then I sized each based on the total amount that each country owes. Notice that Greece, which does not owe a large dollar amount (relative to the other countries), has a deep red color – this indicates that it owes much more than its GDP, making it high-risk. 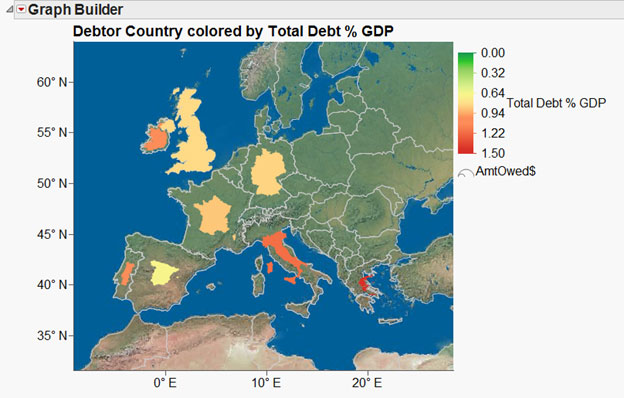 I then turned to viewing the data from the creditor country perspective. The heat map below shows which countries have loaned money to which, and it gives a view of how risky a creditor country’s portfolio is. Reading the heat map vertically, from the X axis up, it clearly shows that Greece is the riskiest debtor country, followed by Italy, Portugal and Ireland. It also shows which countries Greece owes money to. Read it horizontally to see which creditor country might be in the most trouble if Greece defaults. France and Germany have the highest risk portfolios of all the European countries. 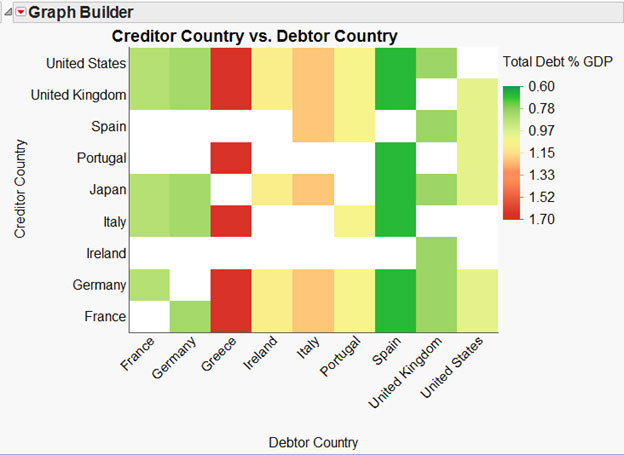 There’s only one thing missing from the above graphs – the size of each debt owed to the creditor countries. To view that, I created a tree map in Graph Builder. The graph below shows the relative risk of each loan and the relative size of the loans. 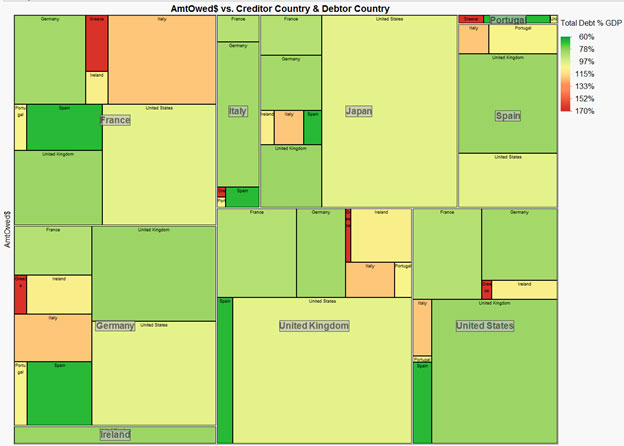 We can see that France’s portfolio not only contains risky debt, but it also is owed more by Greece and Italy than any other creditor country. Germany is next on the risk portfolio scale, but I am most concerned about Portugal, which has some Greek debt, and Spain, which has substantial Italian debt.

Looking at these graphs, you can hypothesize about how badly things might get should Greece default. Both Italy and Portugal have loaned money to Greece. If Italy were to default, Spain would most likely be next, and France and Germany would feel some severe pain. Even if Italy were able to withstand a Greek default, Portugal might not be so lucky. And if Portugal defaults, Italy would once again be vulnerable, as would Spain.

All in all, it looks pretty daunting. As of this writing, Greece has met the European Union’s requirements for spending cuts and will receive more bailout money. But will it be enough? Are other countries poised for disaster? Just yesterday, Moody's Investor Service lowered its credit ratings on Italy, Portugal and Spain.

What do you make of these graphs? Have I missed anything? Any suggestions for other ways to look at the data?

Note: You can download my JMP file from the JMP File Exchange. You need a free SAS login to access the file.

I don't share the pessimistic interpretation but it's a great summary and visualization. Especially I like the idea of sizing the shape of the countries according to total amount owed. It adds the information of an extra variable in an easy to understand manner.

Thanks for this great data visualization!

You have mentioned the source, but it would be nice to share your files via the File Exchange part of the User Community. And maybe we can replay the Eurozone debt crisis another way...

Thanks for the compliment. I've posted the file to the JMP File Exchange. It's entitled, "European Debt Crisis". Would love to hear other interpretations of the data.

Sorry it comes across as overly pessimistic. I was exploring the worst case scenario. The data file I used is now on the JMP file exchange. It will be interesting to see how others may interpret the data. Would love to see a more positive spin.

But why only a few European countries?

And how large would the USA show in the same process?

The European countries used were those in my data source. I imagine those countries will have the biggest impact on the fiscal health of the European Union. The link below goes to a map showing the United States as well, but it's misleading for it only shows the debt amongst US, Japan and Europe. It is estimated that the US owes China $1.5 trillion. If I included that number, it would dwarf all the others and skew the analysis. Perhaps that's a topic for a separate blog post.

Thanks for the additional pic.

Whether the countries included are the ones with the biggest impact depends on how you look at it.There are certainly more EU-countries with a significant debt-to-GDP ratio, and a much larger GDP (and thus debt) then Greece.

By the way, wouldn't it be more illustrative to size the countries with respect to their GDP or debt-to-GDP ratio, in stead of scaling them? Large countries (large geographically speaking) with a ratio of 1 now remain large, although their GPD may be relative low. Or do I misunderstand your graphic?

At first I created the map the way you suggested - sizing the countries with respect to their GDP, and coloring by the amount they owe. I've attached the image. For me, it does not have the impact that the other one does. It show a very large Greece, but it's colored green because the total dollars owed is not that significant relative to the total Euro debt. It doesn't convey how risky loans to Greece have become. However, I may be more sensitive to the colors than the sizes. Someone might look at this graph and see right away how much larger the Greece image is vs. the other countries. Maybe I should have included both versions.

Indeed both have their pro's and con's, and that more or less mirrors the dilemma's in European politics.

Greece has the highest risk to default, but (as the debt is relatively small) the easiest one to support. The arguments to support can be found partly in the other graphs: countries already a bit at risk like Portugal and Italy face much larger problems if their loans to Greece evaporate. Etcetera.