JMP 11 is a big step forward on many fronts, but especially for JMP Pro. From the time it was introduced in JMP 9, JMP Pro has been predominantly focused on predictive modeling, with more sophisticated procedures for fitting neural networks and boosting and bootstrapping regression tree models. JMP Pro 11 broadens its scope substantially with the addition of four new platforms: Fit Mixed, Generalized Regression, Uplift, and Reliability Block Diagram.

The Fit Mixed platform was developed by Laura Lancaster, John Sall and myself and brings to JMP Pro the ability to fit linear mixed models with different correlation structures that take into account space and time, random coefficients models among others. The platform is implemented using sparse matrices and is multithreaded, allowing you to fit models to larger data sets with fairly large numbers of random effects. You can take advantage of these models in almost every scientific discipline, from the social and environmental sciences to engineering and manufacturing.

The Generalized Regression platform developed by Clay Barker is our next-generation generalized linear modeling platform. As the successor to the Generalized Linear Models platform, it can fit models to non-normally distributed data. The most powerful aspect of the platform is the incorporation of modern regression tools like the Lasso and Elastic Net, which automate the process of model fitting and variable selection. The elastic net, in particular, is very useful when fitting models to observational data with correlated inputs. In the future, this will be where we will be adding more distributional modeling options, as well as things like Generalized Estimating Equations and possibly even Bayesian Hierarchical models. 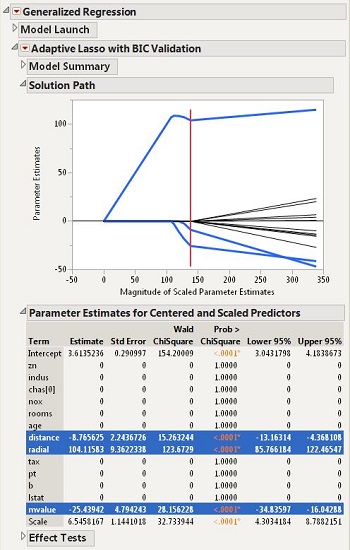 The Reliability Block Diagram platform developed by our Principal Reliability Developer, Peng Liu, in collaboration with the author of JMP’s NodeGraph library, Aaron Anderson, rounds out our suite of engineering reliability tools. It enables one to predict the reliability of complicated products made of many components. For example, an automotive manufacturer will have performed preliminary experiments to understand reliability of the various subcomponents of a new car that hasn’t come out yet. Using the Reliability Block Diagram platform, you can combine these reliability models for subcomponents – such as the transmission, powertrain, engine and electrical system – with an easy-to-use graph-based interface that then plots the reliability distribution for the overall car. 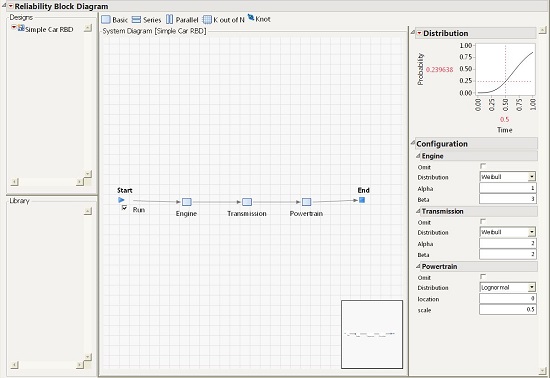 The Uplift Modeling platform, developed by John Sall himself, is a powerful data mining tool with applications that vary from direct marketing to the pharmaceutical industry. The platform fits models that let you identify subpopulations that are most likely to respond to a treatment. For example, you could identify which people are most likely to make a purchase after including them in a direct marketing campaign or identify the subpopulations of patients that are most likely (or unlikely!) to respond to a drug treatment.

We’ve also kept very busy working on the standard edition of JMP. Possibly the most significant effort on this front has been our renewed commitment to serving folks in the social sciences. The centerpiece of these efforts has been another project led by John Sall: a dramatic overhaul of the Categorical platform to make it easier to analyze market research surveys. Factor analysis, an essential part of the social scientist’s statistical toolkit, has been given its own JMP platform by our multivariate analysis developer, Jianfeng Ding.

JMP 10 initiated a renewal of the quality and statistical process control components in JMP and saw the introduction of the Control Chart Builder and the Measurement Systems Analysis (MSA) platform. Developed by Annie Zangi, the Control Chart Builder is a drag-and-drop tool for creating Shewhart charts for continuous response data that has been expanded to handle attribute charts for count and categorical data, as well as charts for monitoring the behavior of rare events. Laura Lancaster’s MSA platform is the first commercial implementation of Don Wheeler’s EMP approach that is an alternative to Gauge R&R studies. The nice thing about this is the simple and direct way it makes clear the impact of measurement error on the ability to detect shifts in a manufacturing process. In JMP 11 the MSA platform has been expanded to handle more sophisticated models that more realistically describe how measurements are taken from a modern manufacturing process.

One of the features that I am personally most excited about is Ryan Parker’s addition to the Profiler in JMP. Ryan has developed a simulation-based approach to assess variable importance that is based on only a prediction formula and not on how you fit the model. The technique is based on the Sobol decomposition of a function, and you can apply it to just about any formula. What this means is that you now have a tool that can be used for variable selection that can be applied to any statistical model, even ones like neural networks that are too much like a black box to use traditional variable selection methods. Here’s the Variable Importance tool applied to a two-layer neural network model fit using JMP Pro to some (simulated) credit card approval data.

Another cool new widget in JMP is the Multiple Comparisons module developed by Laura Lancaster that makes it easy to do a wide variety of multiple comparisons procedures on arbitrary sets of combinations of input variables. These include Analysis of Means, Tukey’s all pairwise comparisons, Dunnett’s test for comparisons versus a control, and even equivalence testing when there is a threshold for practical significance. Each of these comes with a nice graph that makes it easy to see where the differences are in your data. Below is an example of the one for equivalence tests: 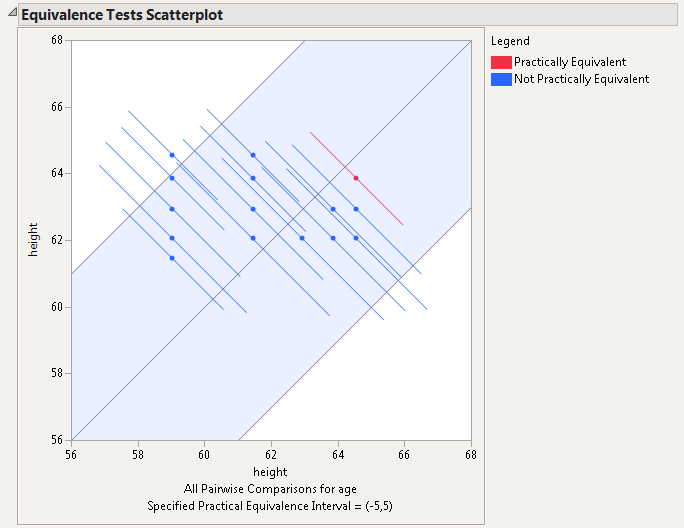 JMP 11 really has a lot for you to look forward to!

Note: This post is part of series of previews of JMP 11 by JMP R&D members and technical experts. The JMP Blog will feature a new preview every Tuesday until JMP 11 is released in September. Check out all of the JMP 11 previews.

Some great enhancements and new features indeed! Thanks for sneak peek. When is the scheduled release date?