The release of JMP 9 has gone smoothly, for the most part. Many folks are excited by the new mapping features and the prospects of JMP add-ins. But there's one area we know you may find puzzling.

The biggest change for most JMP users is the new interface on Windows. Prior to JMP 9, all versions of JMP on Windows used Microsoft's Multiple Document Interface (MDI), which meant that all JMP windows were contained in a parent window.

In our user interface redesign for JMP 9, we moved away from MDI to allow JMP to work better on multiple monitors and to make it easier for you to arrange JMP windows with windows from other applications. With this new approach, however, each window needs a menu and toolbar, which can result in a lot of screen real estate being dedicated to menus and toolbars. 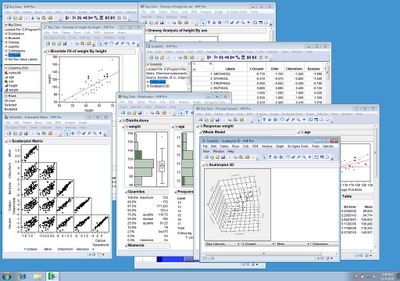 We addressed this by hiding the menu by default in JMP Report windows. The menu is available, but you have to briefly hover over the strip just below the title bar, or tap the Alt key, to reveal it, as you can see here:

Unfortunately, many users haven't discovered the hidden menu. You can adjust a preference to control the disappearing menu, as shown below, and we're exploring some changes to the default setting. But we want to hear from you about this. 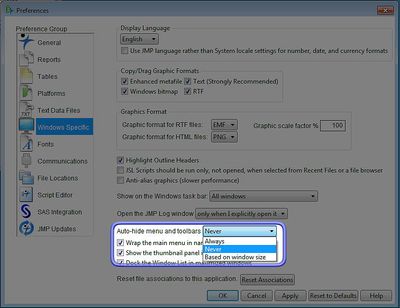 Have you had trouble with the disappearing menu? Did you even know it's there? Now that you've found it, would you rather it was visible all the time? What could we do to make it easier to discover that the menu is there?

Let me know in comments.

The menu bar does work... but depending on your scream (hmm this may be a better choice, I mean to type 'screen') resolution it can be very tricky to actually trigger it. I find I cannot get it reliably with the mouse but didn't try the alt key.

That's exactly what we're doing in the next maintenance release. Look for it in version 9.0.2.

I recall this freaking me out for a brief moment when I first used JMP 9. When faced with such a situation, I typically start pressing Alt, Ctrl, Shift, and every possible combination of the three to see if anything happens. I got lucky with Alt. (I would have designed a DOE to figure it out but I couldn't find the button!) I'm perfectly used to it now and prefer the hidden mode. Perhaps the very first time JMP 9 is run the menu could be visible with a note, "I'm going to hide your menu now unless you tell me to change the preference by clicking here."

Installed JMP 9 on Windows 7 yesterday. I like the ability to toggle between windows. Speeds up my work flow. However, I spent an hour this morning hunting for the save button in the journal window. Finally, I found the the auto-hidden option in preferences. I suggest default to never and provide the alternative as a tip of the day. I don't feel I gain/lose much screen real estate with this option.

Thanks for the advice - I am indeed using windows XP. This helps a lot and I felt sure there must be a way around it.

I'm guessing that you are using Windows XP. If so, then I understand the issue you are running into when you switch back to JMP from other applications. By default, on Windows XP, the only JMP icon we put in the Windows task bar is the Home Window's icon. This is to prevent your task bar from getting cluttered with all of the icons for the myriad windows that JMP tends to create. But the side effect is that if you use Atl+Tab to switch back to JMP, you switch back to the Home Window. You can change this behavior by going to File > Preferences, Windows Specific, drop down the list next to "Show on the Windows task bar:" and choose either "All Windows" or "Main JMP window and data tables" rather than "Main JMP window only". This will allow more of JMP's windows to be included in the Alt+Tab list so that you can switch back to the JMP window you want. The downside is that you will have some extra clutter in your task bar.

This issue largely goes away once you upgrade to Windows 7. Windows 7 does a better job of grouping application window icons automatically, so JMP's floating window model is a better fit.

Sorry for the inconvenience and hope this helps,

I spent an annoying hour trying to find the menus before contacting JMP help. It wasn't at all obvious to me where they were and think it would be better to have them display as default.

The other thing I really dislike about JMP9 (enough that I am still using JMP8 a lot) - when switching between two applications everytime you go back to JMP9 you get the home window and not the table you were working on most recently. All the extra clicking to get the table back in view is very irritating when you are switching between apps a lot.

No problem, it's a cleaner look. And, I use the tool bar quite a bit for saving the output charts

could you just put at the top of the screen?

[...] JMP controls are available to you. You can adjust the axes or use the zoom tool (found on the hidden menu bar) just as you would in JMP. You can also right-mouse-button (RMB) to select Size/Scale->Size to [...]

Perhaps an icon target to bring up the menu. With all the different flavors of operating systems and screen types/sizes, the target area below the title bar can be pretty small.