The new Multiple Comparisons option in Fit Model Least Squares in JMP 11 makes these type of multiple comparisons easy and accessible. This blog post will demonstrate using Multiple Comparisons to compare all treatment means with the overall average, also known as Analysis of Means or ANOM for short.

We will look at an example from The Analysis of Means (Nelson et al., 2005) where researchers conducted a trial to determine how two types of cancer therapy (chemo and radiation) and three types of cancer drugs affect hemoglobin levels in males. Since no interactions were found to be significant, we only include the main effects of the two factors in our model. Figure 1 shows how we set up our model in in the Fit Model launch dialog in JMP. 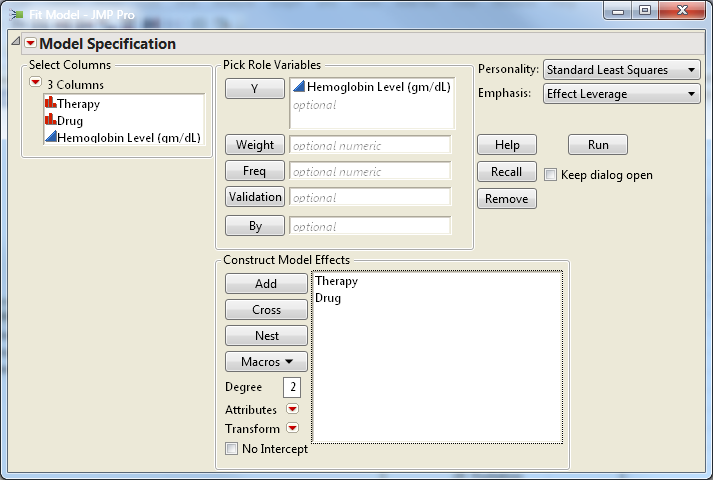 We would like to know if either cancer therapy treatment mean is significantly different from the overall average or if any of the three cancer drug treatment means is significantly different from the overall average at a 95% confidence level. We can answer this question by using the “Multiple Comparisons” option under the “Estimates” submenu of the Red Triangle menu. Figure 2 shows the Multiple Comparisons launch dialog with the default estimate type, “Least Squares Means Estimates,” and the effect, “Therapy,” selected, and the Comparison, “Comparisons with Overall Average,” checked. 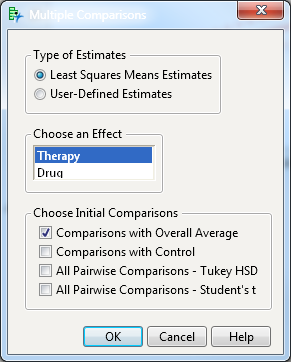 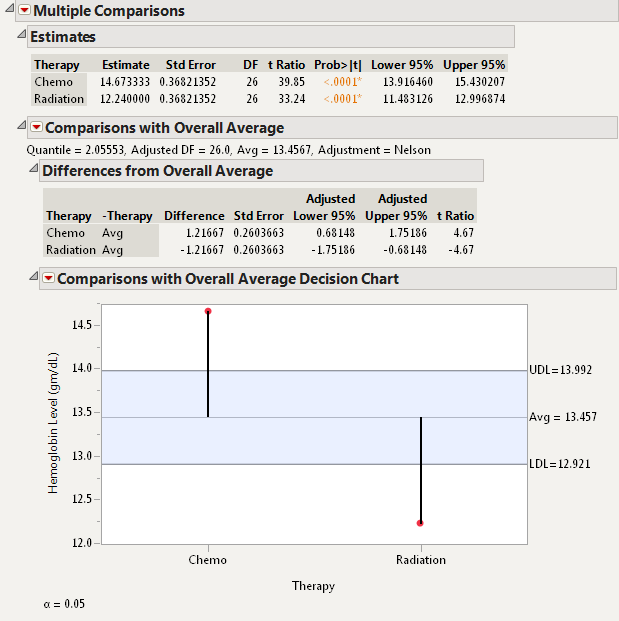 Now we will look at the Multiple Comparison results for the Drug effect. Once again, we choose the “Multiple Comparisons” option under the “Estimates” submenu and choose the same options as Figure 2 except that we choose “Drug” as the effect instead of “Therapy.” The resulting Multiple Comparisons report is shown in Figure 4. Examining this Comparisons with Overall Average Decision Chart, we see that least squares mean for Drug 3 falls outside of the decision limits and is significantly different from the overall average. The least squares means for Drug 1 and Drug 2 fall within the decision limits, and we do not conclude that they are significantly different from the overall average. The hemoglobin level using Drug 3 is significantly higher than the overall average hemoglobin level. 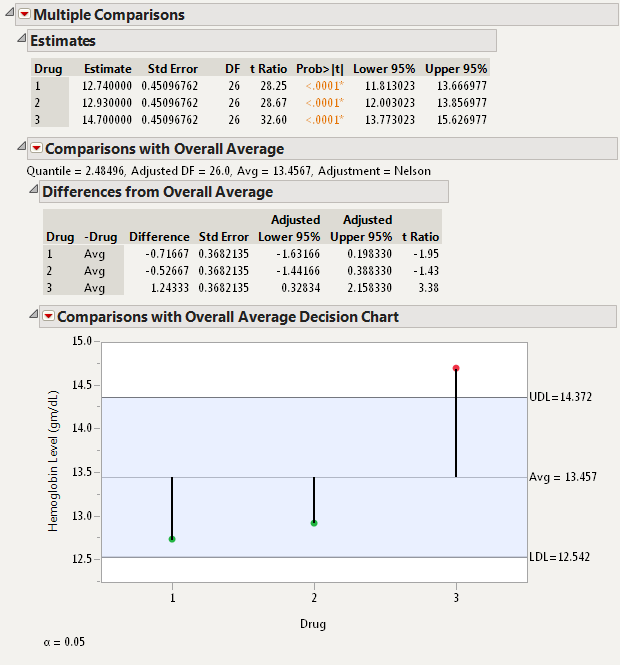 This example demonstrated using the new Multiple Comparison option in Fit Model Least Squares to compare treatment means to the overall average, but Multiple Comparisons has many more options and can also handle more complicated models. Look for my upcoming blog posts where we will examine different types of models and multiple comparisons.

These ANOM methods always trigger skepticism in my experience, due to lack of visibility into raw data from which the choice of mean may not be appropriate due to outliers or clustering. But given only means, this is nice graph with associated tests. Nelson's many adjustments to older textbook methods for ANOM and SPC would be interesting discussion blog perhaps.

In this case, DF is same for each group, and JMP help shows nice example where sample sizes vary.

Looking forward to more blogs on other types of models and comparison methods.