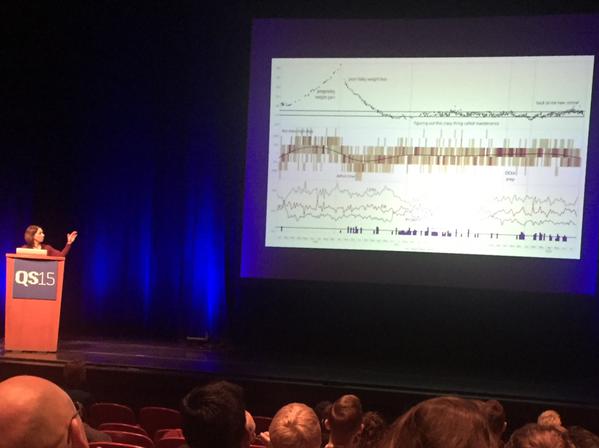 My talk at the opening plenary at QS15 included this and many other visualizations. (Photo used with permission of @whatify on Twitter.)

I recently attended the QS15 Quantified Self Conference and Expo in San Francisco. This three-day event brought self-tracking technology providers together with users who are actively collecting and analyzing their own data. The conference is organized by QS Labs, a Bay area company founded by Kevin Kelly and Gary Wolf. These two Wired Magazine editors collaborated on early work on the Quantified Self and organized the first QS meetup group. Today hundreds of QS groups meet around the world.

Even if the concept of the quantified self (QS) is new to you, you probably know someone who is using a Fitbit, an Apple watch or a smart phone to track their steps, or perhaps an app like MyFitnessPal to track their daily eating habits. If you’ve read earlier entries in my Fitness and Food blog series, then you know step tracking and meal logging are two of the daily practices I have adopted to help me understand and manage my own weight fluctuations over time.

Like many quantified selfers, I  collect data on a biomarker that is of great personal interest to me because it has been a trouble spot throughout my adult life. But weight is only one of many outcomes being measured by those in the QS community. The interests of this group include a variety of different health-related measures, as well as life logging, dream tracking, assessing personal productivity and cognitive function, and much more -- as you can see from the conference’s packed agenda of show-and-tell sessions, small group discussions, and toolmaker talks. I had a chance to study others’ data collection efforts, visualization and analysis approaches and even identified several new metrics I want to track. I tried out various new tracking technologies in the Expo Hall and have already adopted a few of them. If only my QS budget was unlimited...sigh!

In retrospect, it seems obvious that my journey to improve my health metrics would eventually lead me to connect with the vibrant and varied QS community. When I first learned about QS in 2010, I was already well aware of the value of self-tracking, having collected years of diet and exercise data in notebooks. Between mid-2009 and late 2010, while losing 45 pounds in preparation for a second pregnancy, I relied on my daily records to motivate and educate myself about what was and wasn’t working for me. When I saw Gary Wolf’s Quantified Self TED Talk in 2010, I was thrilled to hear about new devices and apps that could help me move aspects of my monitoring process off the page and into smart phone apps and web sites with data export capabilities. Around that time, I began collecting activity and food logging data with a BodyMedia FIT armband, which was the basis of the e-poster I presented at the last JMP Discovery Summit.

Although I collected data with my armband from December 2010 until March 2015, my engagement with the QS community started much more recently. My experience with my own data was largely solitary until 2014, when I finally tackled my data export/import challenges and got my data into JMP. Later that year, my dad saw a NOVA special on QS and sent me the link to Gary’s 2010 talk. Déjà vu hit me the moment I began to watch it, and I realized I had seen it long before. At the time, I found it amusing that my dad was so relieved that there was a whole movement of people just as obsessed with their data and devices as I was with mine! I posted a link to my Discovery Summit project on the QS forum, which helped me connect with QS Labs program director Ernesto Ramirez for a podcast and eventually resulted in an invitation to speak at the conference.

Using JMP to visualize -- and understand -- the quantified self

I had the chance to tell Gary Wolf the story of how his 2010 talk inspired me just before I stepped on stage to open the conference with my short show-and-tell talk. Having the opportunity as a total QS newbie to share what I did, how I did it, and what I learned in the opening plenary session was an experience I will never forget. Steven Jonas from QS Labs reviewed my talk with me before the conference and shared his thoughtful perspective on my slides. Steven suggested that I put the visualizations of my data front and center, which I did.

Stepping on stage with the full power of JMP -- especially Xan Gregg’s Graph Builder platform -- behind me felt pretty amazing. Besides providing the platform I use daily to explore my work-related and personal data sets, I have often relied on Xan’s expertise to suggest improvements and simplifications to my graphs. Xan (who will be a keynote speaker at this year’s Discovery Summit) often posts graph makeovers here on the blog, and in fact, I’ve shown “before and after” versions of graphs in my posts that Xan helped me improve. Graph Builder was a popular topic in the informal “office hours” session I hosted at QS15, where conference attendees dropped by to see my projects and ask questions about JMP. I hope I have the chance to return to the conference in the future to share the insights I know I will gain over my next year of data collection and analysis.

In keeping with the technology focus of the QS15 conference, I thought it would be fun to highlight what I have learned from exploring data from several new tracking new devices I've adopted recently. I hope my coming posts will give you some ideas about new things to try with your own data tables!

I hope you will join me for later posts about my data, and come find me if you’ll be at Discovery Summit in San Diego this September!