As I looked over Monday morning’s news headlines, this story caught my eye:

Wow, I thought, the Windows phone system is really catching on. But then I looked at the numbers displayed in news article:

It’s true that the Windows numbers have significantly increased, from minuscule to small. But does that warrant the headline stating a “massive 52%” increase? And what about RIM, maker of the BlackBerry? Granted, RIM’s share of the market is also small, but losing 81% in one year is HUGE! Why did Windows merit a “massive,” and RIM get lumped with Android and iOS results – just “down”?

It makes me think that the author may be a fan of Windows, no?

Of course, I can use JMP to support the headline by graphing the percent increases from last year:

Windows does looks like the clear winner in that graph. But let’s look at the percent of the market graphically – because that is more meaningful: 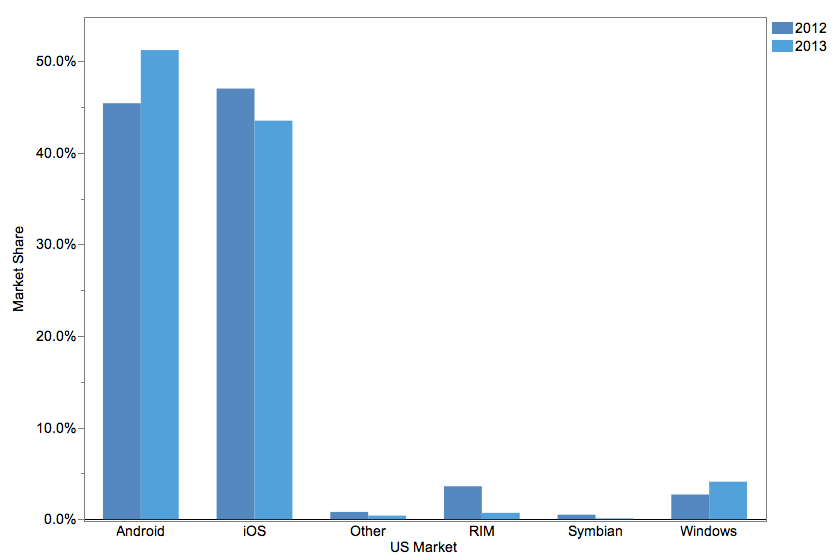 While sales of smartphones running Windows systems have increased greatly over the last year, Windows still has only 4% of the market. Windows gained 1.4% over last year. Not something that other companies should ignore, but is it “massive”?

I’m not sure. I’m reminded of a quote from Naked Statistics by Charles Wheelan: “Percentages don’t lie, but they can exaggerate.”

Here’s all the data shown graphically. Decide for yourself. Do you think the headline was misleading? 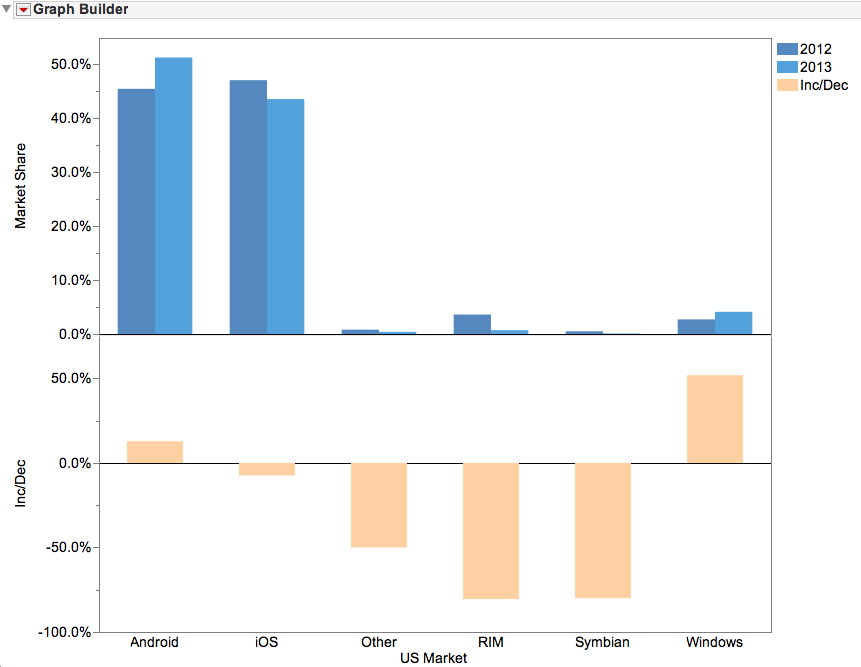 No question, percentage changes can overstate the significance of a small absolute changes, and our agenda-driven news media is well aware of that fact and uses it to their advantage. But for people who like Windows Phone and are hoping it succeeds (like me), seeing it go from 2.7% market share to 4.1% in the US in the last year is heartening.

Most importantly, if you haven't tried Windows Phone, you should. They are great phones.

This story about arsenic in beer and wine is another great example of doubling a very small number. The story cites a study in Germany that found that some filtered beers have twice the amount of arsenic allowed in drinking water. Cause for concern? Maybe, except that we would expect the allowable amount of arsenic in drinking water to be very small.

This article also speaks to the increased measurement capability of modern science:

One reason that chemists are now discovering arsenic in beer is that testing methods are much more precise than in decades past, Boulton says, detecting low levels of naturally occurring elements that have always been in food products.

Hear, Hear! As a fellow WP user I agree :-) Planning to pick up the Lumia 928 tomorrow.