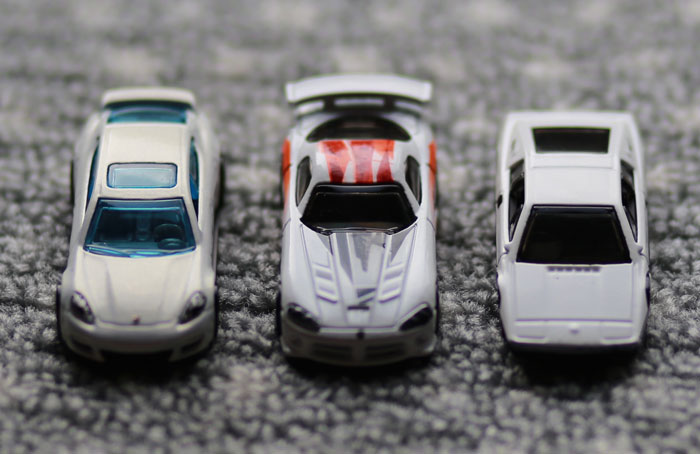 My father and I have collected and customized diecast cars for the past 15 years. But lately, dyeing the cars has become a challenge. (Photos courtesy of Caroll Co)

With Father’s Day fast approaching, it seemed fitting that I should share a story about a father and son bonding over design of experiments (DOE) and toy cars. Full disclosure: Some (including their wives) think both the father and son in this tale are too old to be playing with toy cars.

My father and I began collecting diecast vehicles 15 years ago. To this day, whenever we go to a store that sells toy cars, it’s our first stop, regardless of what we’re shopping for. And both of us have bedrooms in our homes that have officially become toy rooms.

Back when we started collecting cars, my father and I would often customize vehicles using this simple method: We would get a vehicle that came painted white from the factory. We would prepare a popular fabric dye according to its package directions and leave the white car in the dye for 15 minutes. The car would come out looking great. But lately, when my father has tried dyeing some cars using this method, the results have been disappointing.

My parents were recently visiting us in North Carolina from their home in Canada. So my father and I figured, what better way to spend some time together than designing an experiment to see if we can find a new recipe?

Our initial thought was that it might be a matter of adjusting how much dye to use. However, there are other possibilities to consider at the same time. It may also depend on the color of dye or length of time in the liquid. The dye is now also available in both solid and liquid forms. We had used the solid form in the past, and my father had used liquid in his recent attempts. Some online searches also suggested that we should add vinegar. Of course, there’s also an issue with what car(s) to use. I was hoping to use four different castings, but it turns out that it requires some extra care, as I’ll discuss shortly.

The need for covariates

As many collectors know, it’s not easy finding a particular vehicle in multiples when searching at stores. Not only are there few vehicles in white at any given time, it’s also extremely unlikely to find them in equal quantities. After enough searching, I was fortunate enough to find four different castings, with five of vehicle A, and four of B, C, and D. These quantities are close enough to balanced that I could probably find a 17-run design and relabel as appropriate, but I would prefer this to be taken care of during the design phase.

Fortunately, this is easy to accomplish through entering the cars as a covariate. Sometimes we use covariates as a means of choosing optimal subsets, but they are also useful when you have underlying set of design runs that you want the design to obey. All I needed to do in this case was to create a data table with a column for “car” and fill out 17 rows with five A’s and four B/C/D’s. When I go to DOE-> Custom Design, under Add Factors there’s an option for Covariate. 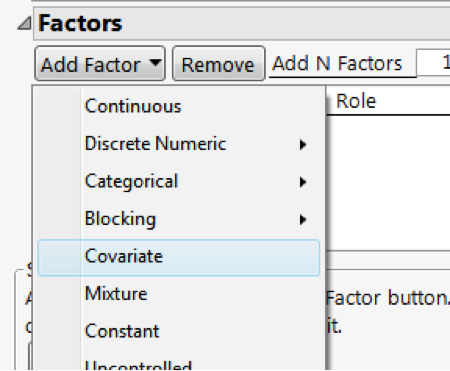 This lets me select the column “car” and add it as a factor.

After I load in the covariate, all I need to do is add the rest of the factors:

I keep the number of runs at 17, and when I create the design, it’s accommodating the numbers of each car that I have on hand.

Next time, I’ll talk about the analysis (notice I haven’t even made mention of a response yet). But in the meantime, happy Father’s Day to all the fathers reading this!