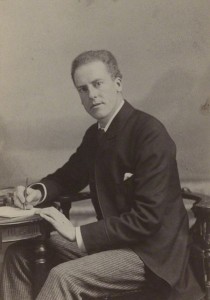 In celebration of the International Year of Statistics, the final statistician we celebrate is Karl Pearson. His work in the late 19th and early 20th centuries laid the structure of mathematical statistics.

Born March 27, 1857, in London, England, Pearson was raised in an upper-middle class family. He studied mathematics from 1876-1879 at King’s College, Cambridge, graduating as the third-ranked among those receiving a degree. This scholarly success allowed Pearson to pursue further studies, which were very diverse in nature, and not suggestive of his future as one of the founding fathers of statistics. These included physics, physiology, German literature (he was actually offered a post in the German Department of Cambridge University), and socialism. Following in the footsteps of his father, he studied the law and was called to the Bar in 1882, but he never practiced.

Even as a Professor of Applied Mathematics at University College London starting from 1884 through 1890, Pearson was highly respected in a variety of areas, but had not yet moved into the study of statistics. This changed in 1891 upon meeting Walter Frank Raphael Weldon, a Professor of Zoology at University College London. Weldon also introduced Pearson to Francis Galton, who was interested in heredity and eugenics through the introductions of ideas of correlation and regression.

With this, Pearson now wrote papers on heredity and evolution, leading to advancements in the correlation coefficient, introducing the chi-squared test and early ideas regarding p-value and ideas on hypothesis testing. The Pearson system of curves meant to describe non-normal curves served as the basis for continuous probability functions, and laid out ideas of principal component analysis.

Pearson, Weldon and Galton co-founded the Statistical journal Biometrika in 1901, which still remains a top journal for statistical theory. His book, The Grammar of Science (1892), with Pearson’s own ideas on relativity, was read by a young Albert Einstein. Pearson was elected a Fellow of the Royal Society in 1896, awarded the Darwin medal in 1898, and awarded an honorary LLD (a doctorate-level academic degree in law) from the University of St. Andrews and a DSc from University of London. Pearson was offered the Officer of the Most Excellent Order of the British Empire (OBE) in 1920 and knighthood in 1935, refusing both due to politics (he had very strong views towards both socialism and eugenics). Karl Pearson’s son, Egon S. Pearson, was also a prominent statistician (Neyman-Pearson Lemma) and eventually took over his father’s position at University College London and as editor of Biometrika.

It seems fitting that after starting out with R.A. Fisher as the first statistician celebrated for the International Year of Statistics, we end with Karl Pearson. There was a long and public feud between Pearson and Fisher over each other’s views. This lasted even beyond Pearson’s death in 1936 (see Edwards, 1994, for a fascinating read) when Fisher was asked to write about Pearson’s life for the Dictionary of National Biography, an entry that was subsequently not used.

Perhaps some of Pearson’s achievements are overshadowed in that the study of statistics started moving towards maximum likelihood estimation and hypothesis testing at the end of Pearson’s career. However, from the website “Earliest Known Uses of Some of the Words of Mathematics,” consider some of the terminology attributed to Pearson (though he was not necessarily the originator of the idea itself):

On examining this list, I have to appreciate how many of these terms have become ingrained into our statistical vocabulary without giving thought to their origins. As the International Year of Statistics draws to a close, we celebrate Pearson, and give thanks to his contributions to the field.

Earliest Known Uses of Some of the Words of Mathematics (accessed Nov. 22, 2013).

I am really impressed by the work of Karl Pearson ,as a statistician I have really enjoyed his work when I was studying statistics.