With multivariate methods, you have to do things differently when you have wide (many thousands of columns) data.

The Achilles heel for the traditional approaches for wide data is that they start with a covariance matrix, which grows with the square of the number of columns. Genomics research, for example, tends to have wide data:

So you would think that multivariate methods are impractical or impossible for these situations. Fortunately, there is another way, one that makes wide problems not only practical, but reasonably fast while yielding the same answers that you would get with a huge covariance matrix.

For example, let’s look at that genomics data set with 1,824,184 columns across 249 rows. I was able to do the principal components of that data using JMP 12 on my 6-core Mac Pro in only 94 minutes. Doing it the other way would clearly have been impossible.

With discriminant analysis, the main task is to calculate the distance from each point to the (multivariate) mean of each group. However, that distance is not the simple Euclidean distance, but a multivariate form of the distance, one called the Mahalanobis distance, which uses the inverse covariance matrix.

But think about the standardized data – the principal components are the same data, but rotated through various angles. The difference is that the original data may have 10,000 columns, but the principal components only have a few hundred, in the wide data case. So if we want to measure distances between points or between a point and a multivariate mean (centroid), then we can do it in far fewer dimensions. Not only that, but the principal coordinates are uncorrelated, which means that the matrix in the middle of the Mahalanobis distance calculations is diagonal, so the distance is just a sum of squares of individual coordinate distances.

There is a set of breast cancer genome expression data that is a benchmark used by the Microarray Quality Consortium with 230 rows and 10,787 gene expressions. A discriminant analysis using the wide linear method takes only 5.6 seconds (on Mac Pro) and produces a cross-validation misclassification rate of only 13.7% on the hardest-to-classify category, ER_status. This misclassification rate is close to the best achieved for this problem, given that the other methods are expensive. 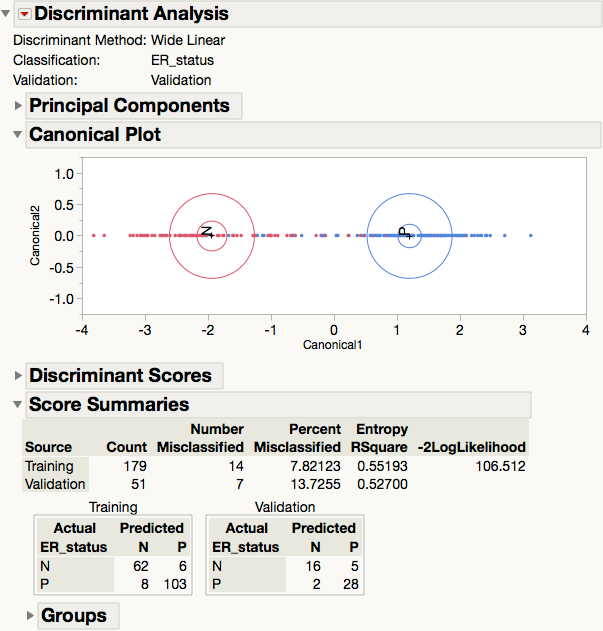