Scagnostics, scatterplot diagnostics, was discovered by John and Paul Tukey and later popularized by Leland Wilkinson in Graph-Theoretic Scagnostics (2005). These analyses were redefined in High-Dimensional Visual Analytics: Interactive Exploration Guided by Pairwise Views of Point Distributions (2006).

The beauty of scagnostics is the ability to visually explore a data set. JMP has the inherent feature called Scatterplot Matrix (SPLOM), which allows the user to simultaneously compare the relationship between many pairs of variables.

However, SPLOMs lose their effectiveness when the number of variables gets too large. Figure 1 shows a portion of the SPLOM report. 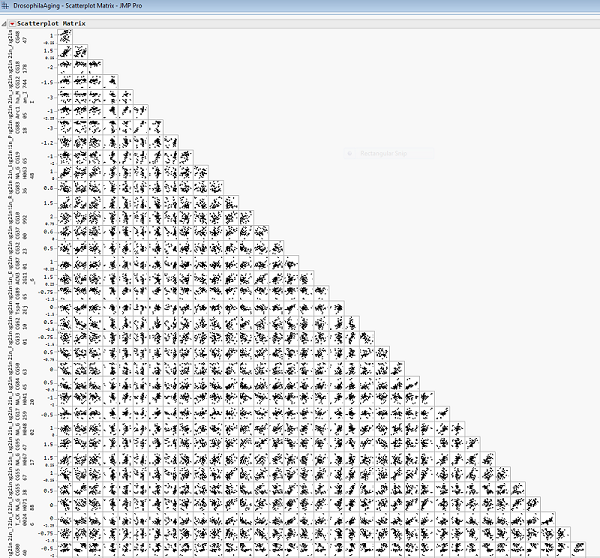 Let's explore the Drosophila Aging data (in JMP Sample Data), which has 48 observations and 100 numeric variables. Notice in Figure 1 the substantial number of variables in this data set. This can be overwhelming, and our ability to visually observe the data is flawed. In Figure 1, only about 15 percent of the actual SPLOM is shown. In a world where data sets are growing every day, we need to be able to extract meaningful information from the relationships between our variables. That’s where scagnostics comes in! Scagnostics assesses five aspects of scatterplots: outliers, shape, trend, density and coherence.

As an example, one point has already been selected in the SPLOM in Figure 2. The corresponding variables are log2in_Tsp42Ej and log2in_CG6372. For this pair of variables, there are two discernible clusters of data. This is noted in a high Clumpy value. 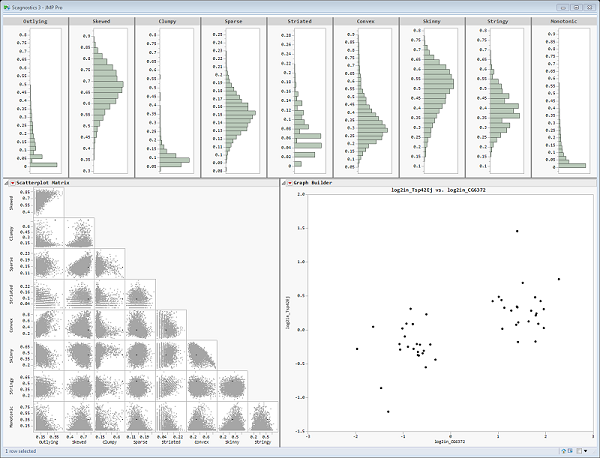 Figure 3 below shows us that if we select a point with a high monotonic value, we can observe a clear association and a strong linear relationship between the variables,  log2in_alpha_Cat and log2in_CG3430der. 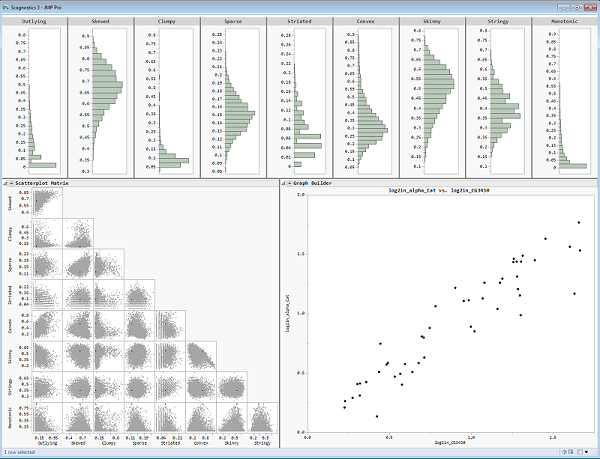 Another key aspect of Scagnostics is outlier detection. Review the Graph Builder plot in Figure 4 below. When we inspect the two variables log2in_CG18178 and log2in_BcDNA_GH04120, we see two data points that visually appear to be outliers. Results with a substantial outlying value, as well as a relatively high skewed value, support the notion that this pair of variables has major outliers overall. 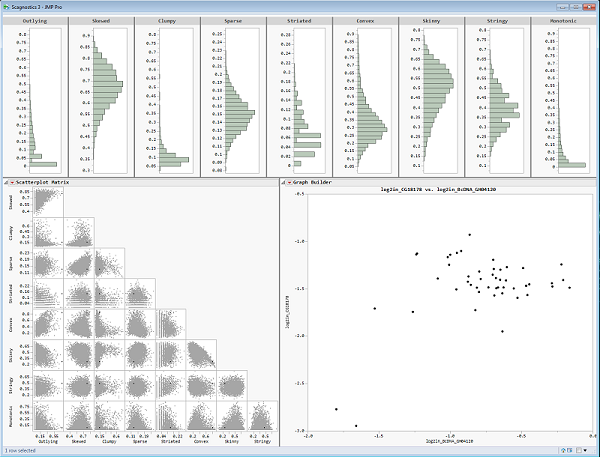 As we compare the original SPLOM report in Figure 1 to the recursive SPLOM and Graph Builder reports in Figures 2, 3 and 4, we uncover much more informative and enlightening analyses.

Now it’s time to download the Scagnostics Add-In and begin your own exploration!

Good job Adam. It did take 30 seconds for only 6 variables but the graph builder showed a nice relationship between 2 genes in my reduced genomics data set. Also the splom and discovery histograms shed a little light on other relationships. Your add-inwas easily downloaded and integrated into JMP.