Purely random data has a 5% chance of being significant. Choose the most significant p-values from many tests of random data, and you will filter out the tests that are significant by chance alone.

Suppose we have a process that we know is stable and consistent. We measure lots of responses, and we also have a Lot ID. The question is: Does any response differ significantly across lots? So we run ANOVAs on them, extract the p-values, sort them, and see this, from the smallest to the largest. We have 13 tests that are significant, i.e., below the line at .05. With random data, we expect around 5% to be significant, which is .05*118 = 5.9, so we have a few more than we would expect. 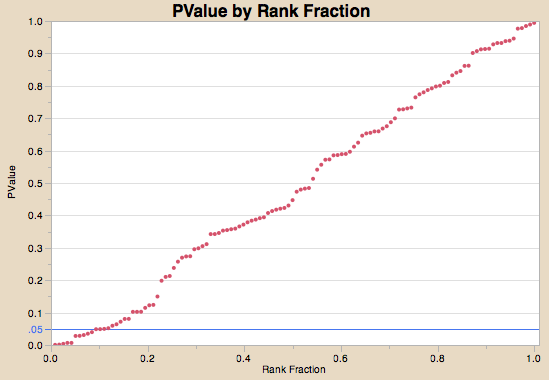 Notice the distribution of p-values — across the fraction of the data, they follow a straight line from near 0 to 1. This is the characteristic of a uniform distribution of values. For purely random independent tests, p-values follow a uniform distribution. We pretty much know that there are no real differences here, yet 13 tests are significant. Our main goal is to look for big differences, so we always want to sort and filter by p-values. But we need something to adjust for looking at lots of tests. Otherwise, we have selection bias — multiple-test bias — a coincidence filter.

Now that we have seen the pattern from data where there are no differences, let’s see what it can look like when many of the tests are really significant. Here, more than 60% of the data looks significant. 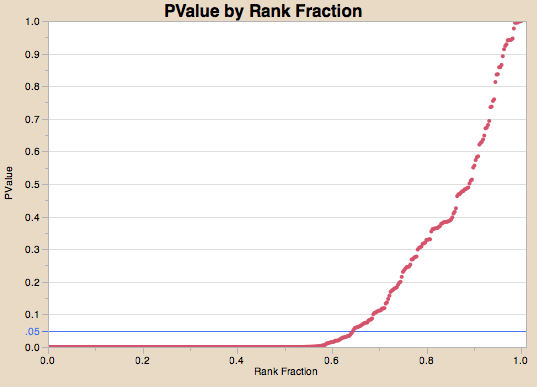 Looking at the right side the graph, it looks like all the values above .05 follow somewhat of a straight line toward 1, but around .10 or .05, the slope of the line seems to change a lot, and it gets very dense near the bottom. Looking at p-values like this – looking for a change in slope – turns out to be the subject of a paper by Schweder and Spjotvoll (Biometrika 1982, p493-502) that started researchers thinking about looking at the whole population of p-values. The reasoning was similar to an analogous situation that Cuthbert Daniel noticed more than 20 years earlier when you plotted estimates from a factorial experiment – the small values near the middle seemed to follow a normal quantile line, but the significant effects veered off that slope.

Well, it happens that there is a vast literature on multiple test bias and methods of adjusting the tests to account for them. These techniques worked well when there were only a few means to compare or tests to make. One very simple procedure was to just ask that the p-values be less than alpha/m where m is the number of tests, and alpha is the significance level. In 1961, O.J. Dunn proved (using the Bonferroni inequality) that this criterion gave you overall protection for all the tests.

But the Bonferroni is a very conservative criterion, making it difficult for most experiments involving many tests to obtain results, so many other methods were developed.

On the left is the lot-to-lot data, and the Benjamini-Hochberg ramp is shown by the red line, starting at .05 on the right, down to .05/118, and none of the red p-values manages to get under the ramp. On the right is the engineering change data; the red points dive under the ramp such that more than 60% of the responses are significantly different.

What if the tests are not independent? In most cases, specifically when there is a positive correlation between the tests, it turns out that the BH FDR adjustment is conservative, giving you the protection you want. The false discovery rate idea has since grown a rich literature, including refinements worth doing in some cases.

In the era of Big Statistics when you conduct hundreds, thousands or even millions of tests, the FDR-adjusted p-values should be the new standard best practice. You won’t just be filtering out coincidences; you will know that most of what you catch will be real effects.

You can get the False Discovery Rate PValue add-in from the JMP File Exchange. (Download requires free SAS profile.) Also FDR adjustments are standard in the Response Screening platform and fitting personality in JMP 11.