This is the final post in my JMP for Linear Mixed Models series (see my earlier posts: Part 1 and Part 2). Here, I will show an example of spatial regression, followed by some tips for fitting mixed models in JMP Pro.

Just as repeated measures are correlated over time spatial data are likely correlated in space — that is, measurements that are relatively close together are more alike than those farther apart. Thus, we need to take spatial dependency into account in the analysis.

Spatial data are recorded along with coordinates such as latitude and longitude, positions of row and column, north-south and east-west directions. The distance between two measurements is calculated using a Euclidean distance function, which is used to form a covariance structure. If a distance function doesn't depend on the directions of measurements, then the covariance is said to be isotropic; otherwise, it is anisotropic. In addition, a nugget effect can be added to account for abrupt changes over small distances in a local area.

The following example is taken from SAS for Mixed Models (2nd Edition, 2006, pp. 457-460). In order to investigate the water drainage at a hazardous waste disposal site, 30 samples were taken at various locations at the site and recorded by their north-south and east-west directions. A linear relationship between water drainage (measured by log-transmissivity) and the thickness of a layer of salt was proposed. (The data,  Data Set 11.6, Hazardous Waste,  is available in a zip file from SAS.)

I fit the following spatial regression model using a spatial anisotropic power structure with a nugget effect. This structure allows (1) distance to be a power function of spatial correlation, (2) spatial correlations to differ in different directions and (3) variation over small distances. 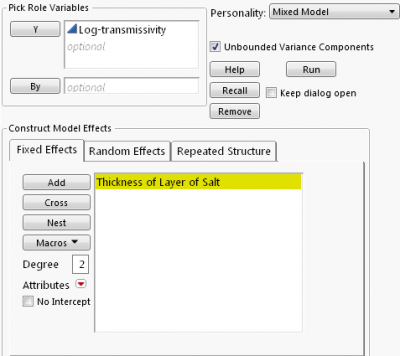 Fixed effects part of the model 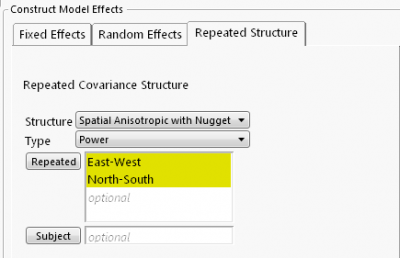 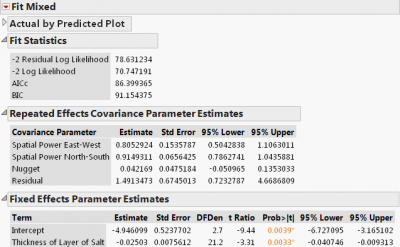 I refit the model without a nugget effect. 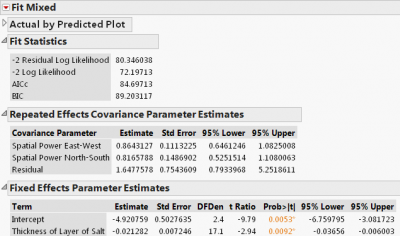 We notice some minor changes in the covariance and fixed effect estimates: The estimated spatial correlations are 0.86 and 0.82, respectively, and the effect of thickness of salt is -0.021. Comparing the goodness of fit using AICc, the second model is slightly better as its AICs is smaller (84.7 vs. 86.4).

By now, I hope I have demonstrated the versatility of mixed models and ease of fitting a mixed model in JMP. Before I close, I’d like to offer some general tips:

Finally, I will be presenting a live webcast, Linear Mixed Models Using JMP Pro, on July 17 at 2 p.m. EDT. You are welcome to attend.

(Acknowledgement: I would like to thank Christopher Gotwalt and Laura Lancaster for their help.)