Analytics and visualizations certainly played a prominent role in this year's presidential election coverage. I've been on the lookout for new visualizations, but the flawed red-blue colored national map (aka a choropleth map) still rules. Here's a typical map (from PBS): 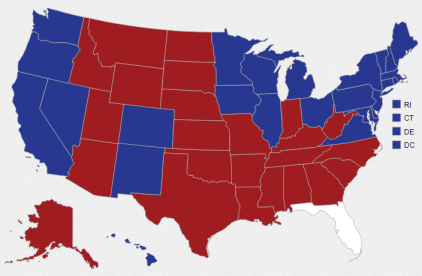 What's the flaw? As a colleague was asked by his 10-year-old daughter, "Why is the map all red if Obama won?" The problem of land area versus the actual measure (elector count in this case) is well-known, and many fixes have been tried, but none have been entirely successful. I have seen a couple of rectangular cartograms like this one from the Los Angeles Times: 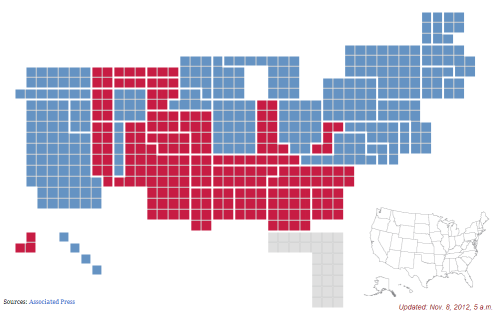 And in the same spirit, JMP can make a discontiguous cartogram (below), which adjusts the shape sizes to honor a given variable. But even when the sizes and color amounts are correct, it's not easy for our vision system to sum up the red and blue areas if the race is close. 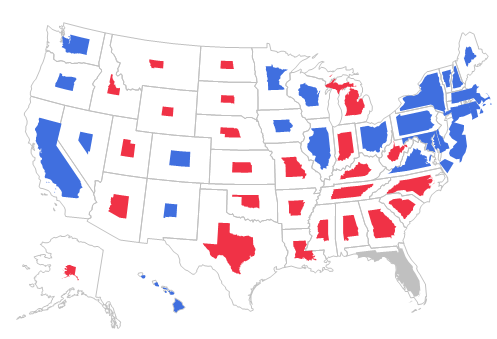 Instead of replacing the choropleth map, the trend seems to be to augment the map with different visualizations that communicate other messages better. The choropleth serves as a geographic lookup table and a great way to identify regional trends. A horizontal double-ended bar chart is often used to show the totals. Here's a basic version from The New York Times:

The Huffington Post goes a step further and segments the bars by states. The states are identified by hovering and appear to be ordered by the vote margin.

The Wall Street Journal uses the vertical dimension (and position) to show each state's vote margin.

The least efficient election visualization I've seen is this breakdown of the House of Representatives results from Al Jazeera: 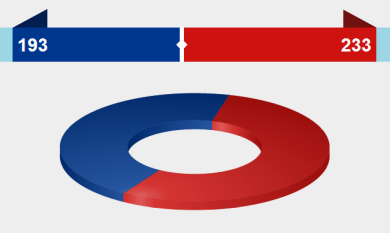 That's a lot going on for just two numbers.

I was looking for a new angle, so here's my own creation using JMP: a running elector count over the course of the election coverage, as reported by the Associated Press. 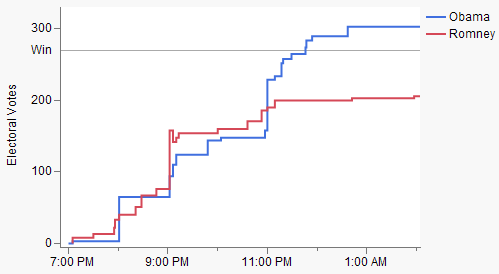 The AP waits for polls to close before making calls, which accounts for the big jumps at 8, 9 and 11 p.m. You can also see the correction at 9:06 p.m. after Michigan was mistakenly given to Romney.

Of course, many of those state results were already known at the start of the day, so the timeline wasn't as suspenseful as the graph appears. Trying to account for that a little, I created an updated view where all the givens are committed up front (that is, any state with a 99.5% certainty or higher in Nate Silver's Political Calculus): 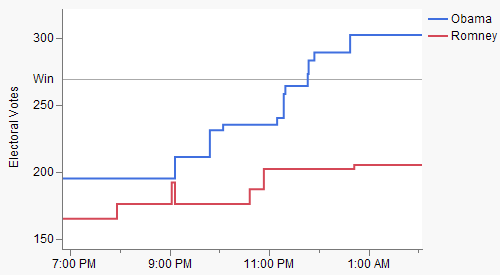 Nice idea. It would be interesting to do your line charts to compare how different media outlets called the race. Maybe this year, they were kind of aligned but when the election were closer in the past, some stations were more aggressive than others.

Thanks, Kaiser. Good idea to compare different sources. The AP was the only site where I found time-based data (though I didn't look too hard), but I now realize I could approximate others' timelines by reviewing their twitter feeds.

interesting roundup! I made a discontiguous cartogram of the 2012 Presidential Election results similar to yours, but with classed color values showing how strongly each state preferred its chosen candidate. I created an interactive version that shows both the popular vote and the electoral college vote, check it out here: