When you have millions of observations of real data and do a simple fit across two variables, if you don’t get a significant test, then it is strong evidence of fraud. The one kind of data that is reliably non-significant for very tall data tables is simulated data. We live in a world with many subtle forces acting in many complex ways — so things are generally different by a little, even if they are not different by a lot.

In an age of Big Data, when we have millions of observations, we can expect almost all tests to be significant. But in most cases, we don’t care about small differences. What we want to know is if the difference is larger than what we care about.

If we don’t have specification limits, we use something similar. Assuming the mean difference is small compared to the natural variation and that the process is reasonably behaved with a capability of 1, then we use 6*sigma as the spec range. We use IQR/(Q(.75)-Q(.25)) to estimate sigma, where Q is the normal quantile, and then we care about 10% of that interval. 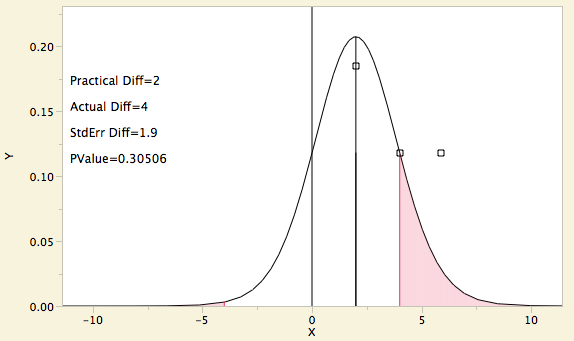 Tests in that direction are called equivalence tests. They are used most often in the regulated medicine and medical devices industries to prove that a change doesn’t affect the results. Equivalence tests should be taught to introductory statistics students so that they understand that accepting a null hypothesis does not prove the null — it just means you don’t have enough evidence to reject it. 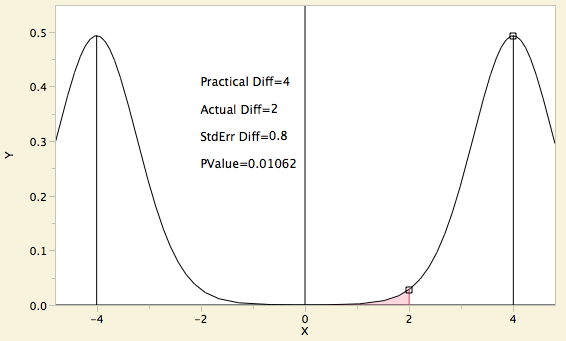 Now we have both tools. So when we compare means, with reference to a practical difference, we have two p-values and three possible conclusions: Practically Equivalent, Practically Different and Practically Inconclusive, if both p-values are not significant.

Now you can go through the comparisons and quickly identify how each of the many responses has changed its mean across the factor, even if you have millions of observations.

These ideas should be elaborated in webinar format for high school STEM classes.

These are important concepts that need to be illustrated (as you have done) and are not well illustrated in many text books. Data rich as we are now days, the old hypothesis tests are much less useful at first glance, but you have salvaged the p-value for big data by use of practical limits and a novel (to me) visualization and table (when many people are now attacking p-values as dangerous or useless in many ways.)

Caveat: I am not a statistician.