“That’s all baseball is, is numbers; it’s run by numbers, averages, percentages and odds. Managers make their decision based on the numbers.” -- Rollie Fingers, 1981 AL Cy Young Award Winner

The Cy Young Award has been given to the best pitcher in baseball since 1956. The American and National leagues have had separate awards since 1967. Members of the Baseball Writers Association of America vote on the winners. And as Rollie Fingers said, many different numbers are taken into account when determining which pitcher is most worthy of the award.

Throughout the history of the Cy Young Award, the writers have relied upon the traditional statistics, such as earned run average (ERA), strikeouts (Ks), wins, saves and innings pitched (IP). Today’s Cy Young-voting writers have even more statistics to consider, with the development of sabermetric statistics like wins above replacement (WAR), fielding independent pitching, and batting average on balls in play.

This blog entry will look at the history of the Cy Young Award winners from a statistical standpoint, taking a look at both traditional statistics and WAR, which offers a comprehensive statistic of how valuable a player is to his team. For more information about how WAR is calculated, Baseball Reference has a good explanation.

The average stat line for the 110 Cy Young Award winners is shown below:

These stats are a little skewed since they include nine relief pitchers who have won the award. If we filter out relief pitchers because they pitch relatively few innings, here is the average stat line for the remaining pitchers:

During the 60-year period of the Cy Young Award, many of these statistics have remained relatively constant for the winners. ERA, win percentage, Ks and WAR have not shown a statistically significant change throughout the history of the award.

Up until the 1970s, many teams used a four-man starting pitcher rotation. This led to more starts, more innings pitched and the chance for more wins. Since the late 1970s, teams have moved to a five-man starting pitcher rotation. This has given pitchers less chance to win large numbers of games. The last pitcher to have more than 36 starts in a single season was Greg Maddux in 1991. Only two pitchers have had more than 40 starts since 1980. These trends can be seen in the JMP graph and table below: 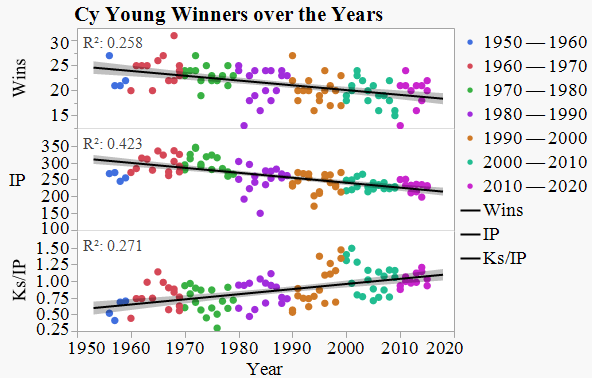 There is a statistically significant difference in strikeouts per nine innings by comparing four-man rotations to five-man rotations, which you can see below as well. While more innings pitched and fewer rest days appear to be contributing factors, another potential factor might be a different philosophy on pitching. Sandy Koufax was quoted as saying, "I became a good pitcher when I stopped trying to make them miss the ball and started trying to make them hit it." 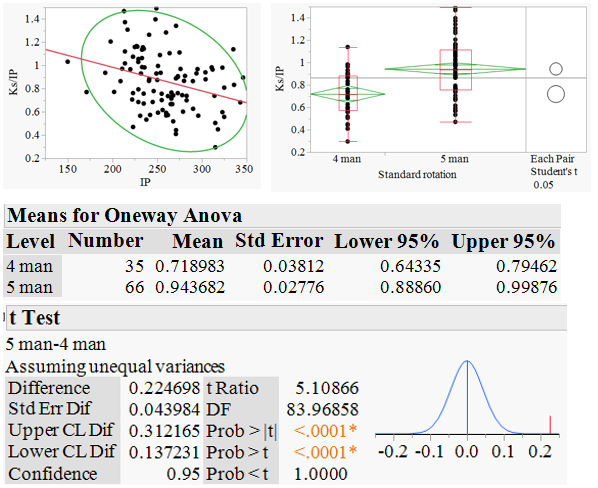 According to the wins above replacement (WAR) statistic, the five best seasons by Cy Young winners are listed in the table below. Although we will continue to debate what was the best season that a pitcher has ever had, this is a pretty good list:

This got me thinking: Were there any pitchers who did not win the Cy Young Award who had comparable WAR statistics to these top five? Looking at pitchers’ seasons back to 1956, I found one WAR statistic that would be in the top five from a pitcher who did not win the award: Wilbur Wood in 1971 had a WAR of 11.7. Wood finished third in American League Cy Young voting that year. You can hardly blame the writers because the Cy Young winner Vida Blue had more wins, fewer losses, lower ERA and more strikeouts than Wood. Also the WAR statistic was not developed until 2004, so that did not factor into the voting.

That led me to ask: Which Cy Young Award winners were least deserving by WAR standards? Five pitchers won the award with a WAR that was at least 4 less than another pitcher.

WAR is not a perfect statistic, and the Cy Young Award should not default to the pitcher with the best WAR. But when there are large discrepancies, I hope the Cy Young-voting baseball writers will take notice. In 1990, Roger Clemens was clearly a better pitcher than Bob Welch. Not only did he have the gap in WAR, but a much lower ERA (1.93-2.95), more strikeouts (209-127) and yielded fewer home runs (7-26). It is difficult to feel much sympathy for the seven-time Cy Young-winning (and allegedly steroid using) Roger Clemens, but clearly he was more deserving of the award in 1990.

For a case of a player more deserving of sympathy for not receiving a Cy Young Award, look to Dave Stieb. Stieb led the AL in WAR for pitchers from 1982-1984 but never finished higher than fourth in the Cy Young voting. While Stieb is a seven-time All-Star, most baseball fans do not think of him when they think of the best pitchers of the 1980s. Perhaps a Cy Young Award or two would have changed that. 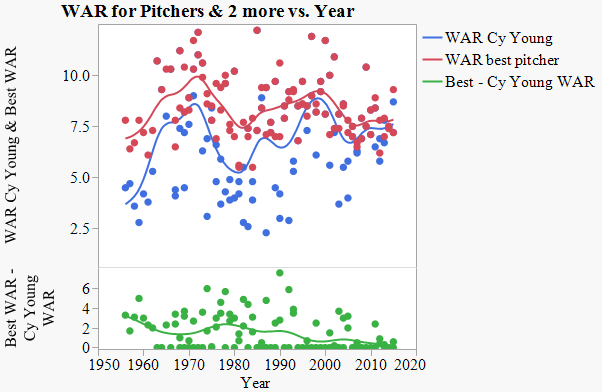 Cy Young Award voting remains subjective, and that is part of the charm of baseball. The Cy Young voters seem to be paying attention to the newer sabermetic statistics when considering which pitcher is truly the most deserving of the award. That is a good thing for baseball now and into the future. While it is too late for Dave Stieb to win a Cy Young Award, I feel like today he would have a better chance than he did during his playing career.

Thank you, very interesting! Maybe the decline in wins is not only owed to the diminishing number of innings pitched, but also to the fact that the win statistic has lost a lot of its appeal with the advent of analytics. Pre-moneyball, it would have been very difficult for Felix Hernandez to win the Cy Young award with a 13-12 record, like he did in 2010 (and rightly so).

Yes I agree with your assessment and Felix Hernandez is a great example of the adoption of the more advanced analytics in the Cy Young voting process. He was very deserving of the award at least in terms of WAR, but most likely would not of won pre 2004. Thanks and glad you enjoyed the article.

Just an amazing fact that Clayton Kershaw's LIFE TIME ERA is lower than the combined AVE ERA of ALL Cy Young Award winners!  He Averages a Cy Young.  Too bad he is like Sandy Koufax, at 30 he's hurt and going down fast.