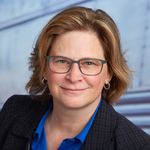 I’ve been looking into crime − 9,134 rows of crime to be exact. After reading about geospatial analysis of crime in The Police Chief magazine, I decided to do this in JMP.

So, I downloaded all of the individual crime incidents from April 2012 from the San Francisco government data website. Then, I began my geospatial analysis in JMP.

One challenge for police and other public safety officials is deciding where to put patrols to effectively reduce crime incidents. One idea is that traffic incidents co-occur with more serious crime, commonly called the Data-Driven Approaches to Crime and Traffic Safety (DDACTS) model.

To explore this idea in JMP, I recoded the data into traffic and non-traffic incidents, and used Graph Builder in JMP to overlay density maps of each precinct. You can see that traffic and overall crime did have a similar pattern in April in San Francisco. 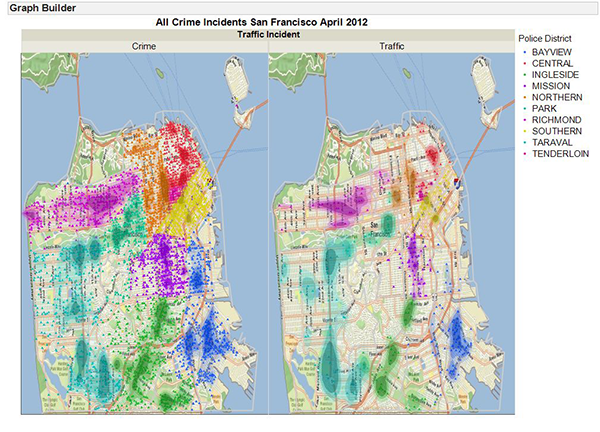 Finally, I wanted to know more about when incidents occur. Again, I used Graph Builder, this time to make heat maps based on time, date and precinct. The heat maps provide a great overview, and they would be a helpful tool for staffing and force planning. At first, I was a little surprised that 6 pm is a high crime time in downtown San Francisco, but then I realized that is when everyone is out and about − including me! 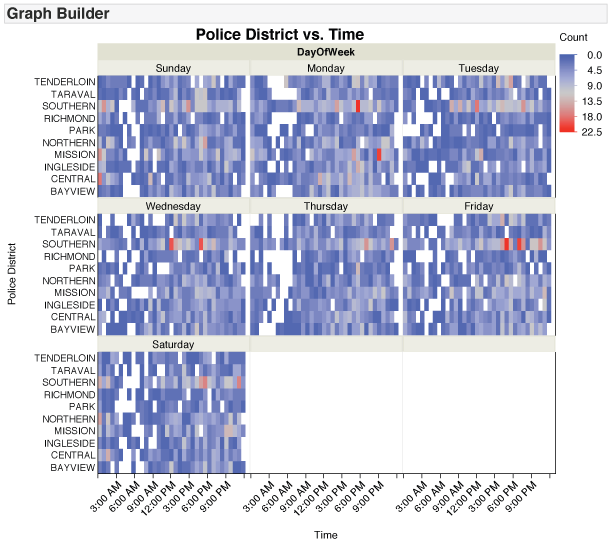 Many thanks: This will be certainly very useful to show my students the power of JMP on real data. Do you know anybody trying to do with JMP the same kind of analysis on the Wall Street Journal "Murder in America: an interactive database of killings committed in the U.S. from 2000 to 2010" available at http://projects.wsj.com/murderdata/#view=all&kr=B (I can't get the original data from France) ?

Yves - I love using real data with JMP, and am excited to hear you will use this with your students! I do not know of anyone looking at that data set yet. I will see if I can find it on the FBI site (I cannot get it from the WSJ). I had a hard time finding data that was not summarized. If more police and emergency services would put up the actual transactional data, we could all help fight crime with visualization and data mining, and be more tuned into what's happening in our own neighborhoods!

Hi Laura - nice job.... I can see where this method might come in handy for some of our clients. Where did you get your map of for this example and how do you find them in general? Do you use a Web Map Service? Thanks!

Thank you for the compliment! JMP does have the ability to use a Web mapping service (WMS), although I did not use one for this example. I could have used the NASA server, for example, but that doesnâ t have streets. I also wanted the map (which is just a background picture) to be saved as part of the script so there is no other file to refer to. John Ponte, one of our great JMP developers, helped me out getting the background map by using an online ESRI source to get some map tiles. I used scripting to align the background picture (the street level map) with the x, y coordinates (which is the x and y axis in the graph).