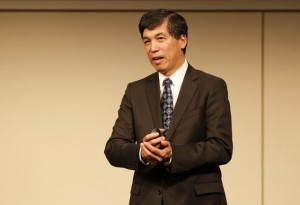 Willy Shih gained a lot of new fans at Discovery Summit 2012. In fact, one attendee who hadn't missed a single JMP user conference said Shih's keynote speech was the best talk ever.

Unfortunately, at the time of the conference in September, the Harvard Business School professor's new book, with  Gary Pisano, had not been released. But their book, Producing Prosperity: Why America Needs a Manufacturing Renaissance, is out now, and it's a great read.

What are the key takeaways from the book?

In a recent email, Shih said "the key link we would like people to understand is the connection between manufacturing and innovation. In circumstances when your manufacturing processes are not mature, or your products don't have a high degree of modularity between components, the ability to make has a strong connection to future innovation capacity."

What are people saying about the book so far?

"We have received a lot of positive reaction to date. I think many people hear the debate about manufacturing and the importance to jobs, but the public discourse has lacked the next level of detail. That is what people are hungry for, and what we are striving to do. In so doing, we hope we can enrich the national discussion on this important subject, and pull together as a country to invest more intelligently for our collective future," Shih said.

If you'd like to hear Willy Shih speak on this topic, sign up for our Analytically Speaking webcast series. Shih is the featured speaker for December.

Arati, I couldn't resist responding to your blog and going on record to saying that the day Willy left Kodak was the day I decided to change my career and leave Kodak. After spending 28 years there I just couldn't understand why given the opportunity to appoint a true visionary as CEO, Kodak chose an alternate path. Enough said.

Shih's discussion of the value of industrial commons - geographic centers of education, research and manufacturing - interests me. His proposition that this triumvirate nurtures sustainable economic growth varies from the position made by some executives in industries who make the case that as long as the US maintains intellectual mindshare and owns the product design space, maintaining a strong manufacturing is secondary and perhaps superfluous to the economic success of the US (or any country). Anyone have a JMP or SAS analysis that addresses this issue?