In my previous blog post, I announced the new Process Capability platform in JMP 12 and shared some of the ideas that steered its development. Process capability analysis is used in many industries for assessing how well a stable process is performing relative to its specifications; it helps quality practitioners understand the current state of their process so they can make adjustments and reduce process variation, thereby improving quality and consistency. In this post, I will show some of the new features in Process Capability with an example.

Since summer is quickly approaching, I thought it would be fitting to look at an example for a fictional ice cream manufacturer called Tiger Paw Ice Cream Company. Tiger Paw Ice Cream makes a variety of frozen desserts. The company has many specifications that guarantee great taste and creaminess for all of its frozen desserts while also meeting FDA requirements. We will examine the capability of Tiger Paw’s production to meet the percent milk fat specifications for three frozen desserts: Tiger Tracks Ice Cream, Low-Fat Chocolate Ice Cream, and Vanilla Frozen Yogurt. The following are the percent milk fat specifications for these products:

In this process capability study, five samples of each frozen dessert were randomly chosen from each of the three product blending machines at the beginning of every hour for eight hours. Figure 1 shows how we set up the launch dialog for the new Process Capability platform. We assigned columns Tiger Tracks % Fat, Low-Fat Chocolate % Fat, and Vanilla Frozen Yogurt % Fat as processes and then assigned Machine and Hour as subgroup columns for each of these processes. (Note: We saved the spec limits as column properties in the data table so that we did not have to enter the spec limits through a dialog.) 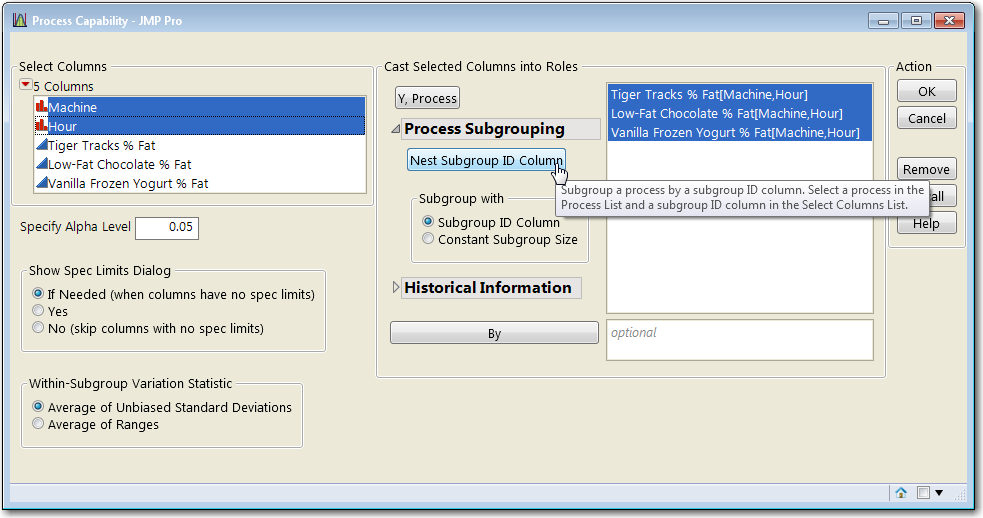 Figure 2 shows the initial process capability report after the platform is launched.  (The Goal Plot point labels have been pinned open. You can always identify a point by moving the cursor over the point to see the label.) The Goal Plot and Capability Box Plots give you quick ways to visualize how well the processes are meeting specifications.

By examining the Capability Box Plots, we quickly see that some of the Tiger Tracks Ice Cream samples did not meet the percent milk fat specifications since there are points that fall outside of the spec limit lines. Its box plot is also rather wide, indicating relatively high variation in the data with respect to the spec limits. Next, we notice that the box plot for the Low-Fat Chocolate Ice Cream is off-center with most of the data above the target line. The box plot for the Vanilla Frozen Yogurt looks healthy. We would like to examine these processes in more detail, so we turn on the "Individual Detail Reports" from the menu. 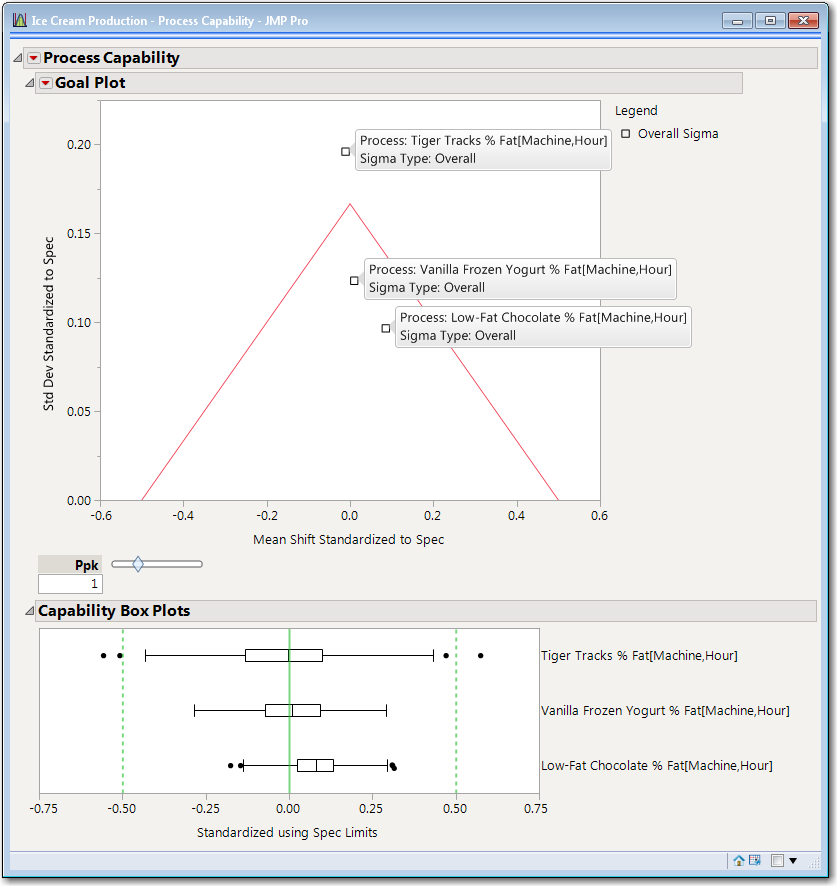 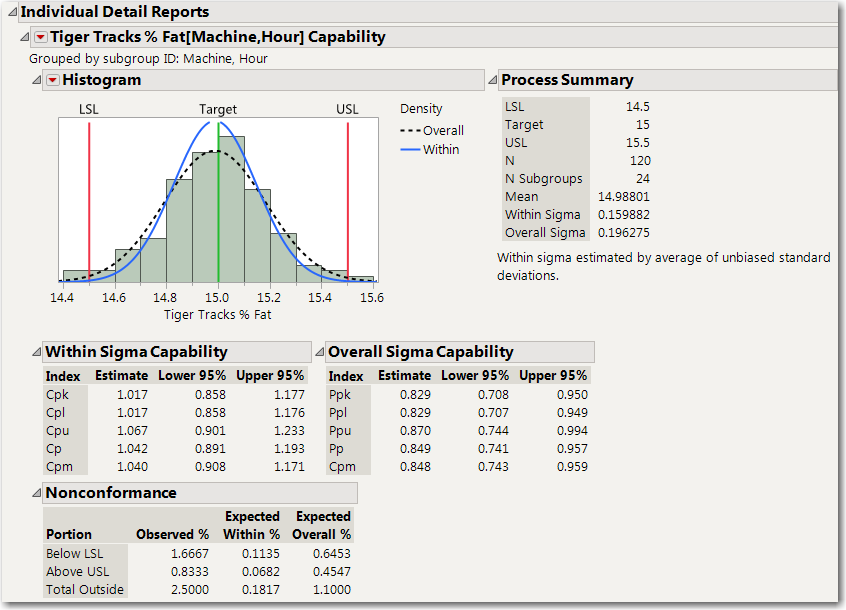 As a first step in trying to figure out what is making their Tiger Tracks Ice Cream process unstable for percent milk fat, we choose "Select Out of Spec Values" and "Color Out of Spec Values" from the main menu. Figure 4 shows a portion of the data table with some of the out of spec values selected and colored. Values that are below the lower spec limit are shaded red, and values that are above the upper spec limit are shaded blue. Examining these outliers and the data, we suspect possible issues with machines 2 and 3. 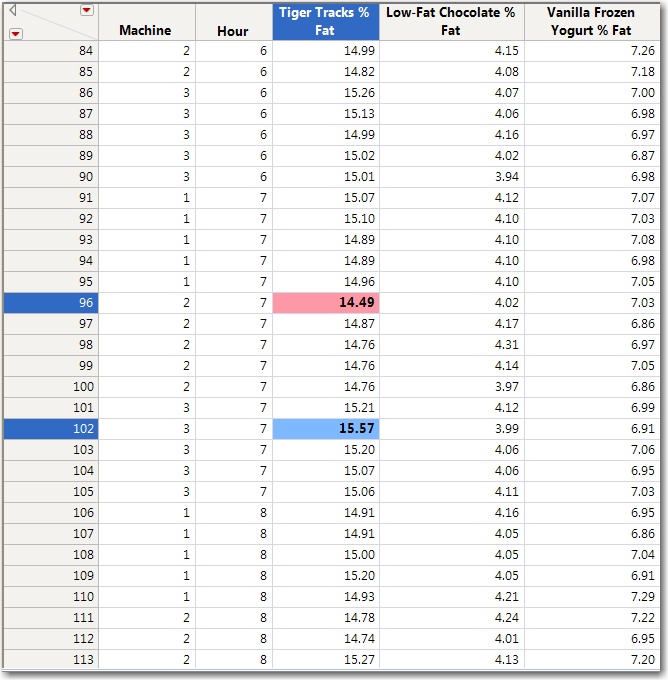 Figure 4: Out of Spec Values, Selected and Colored 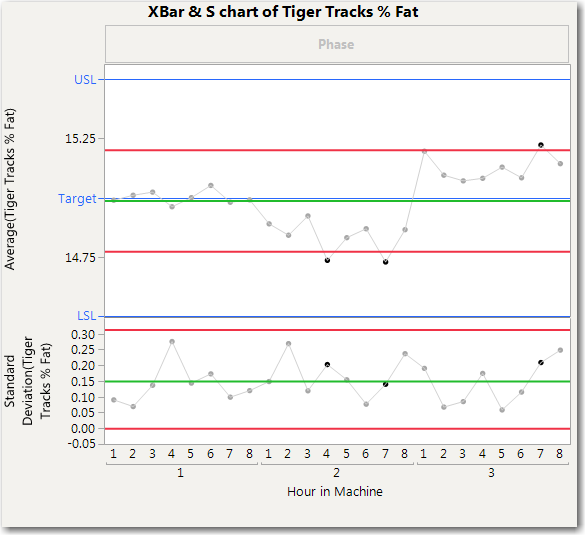 Next, we examine the Individual Detail Report for the Low-Fat Chocolate Ice Cream, shown in Figure 6. The histogram suggests that the data is approximately normal. The density curves fall atop one another, indicating a stable process. We also see that the Overall Sigma and Within Sigma estimates in the Process Summary report do not differ much. All of the data is within in the specifications limits, but we see that the distribution is shifted to the right of the target. This means that the consumer is getting a little more percent fat than they think, and Tiger Paw is wasting some of its milk fat. Getting this process back on target would improve consumers’ waist lines and Tiger Paw’s bottom line. The Cpk value of 1.431 and Ppk value of 1.429 indicate that this process is still quite capable despite being off target. 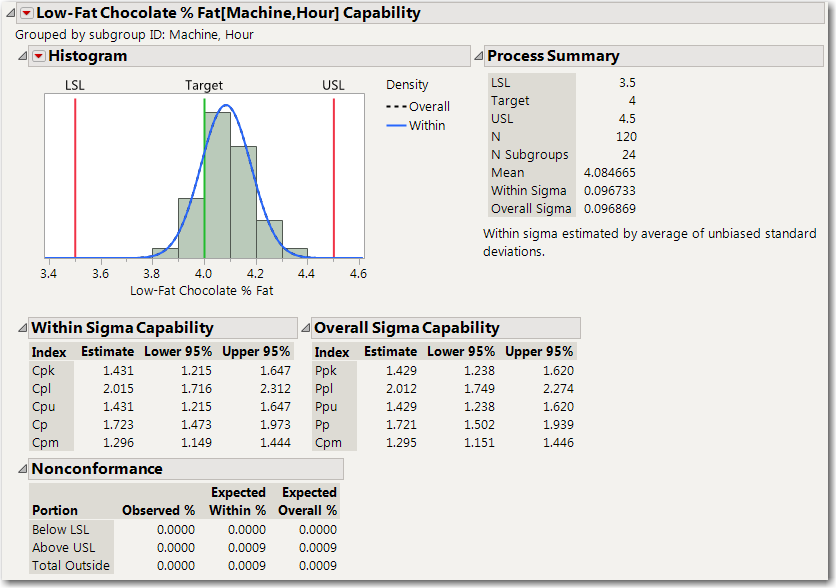 Finally, Figure 7 shows the Individual Detail Report for Tiger Paw’s Vanilla Frozen Yogurt. Once again, the histogram suggests that the data is approximately normal, and the overlaid density curves suggest that the process is stable. The data appears to be centered on the target and well within the spec limits. The Cpk value of 1.333 and the Ppk value of 1.324 indicate that this process is capable. 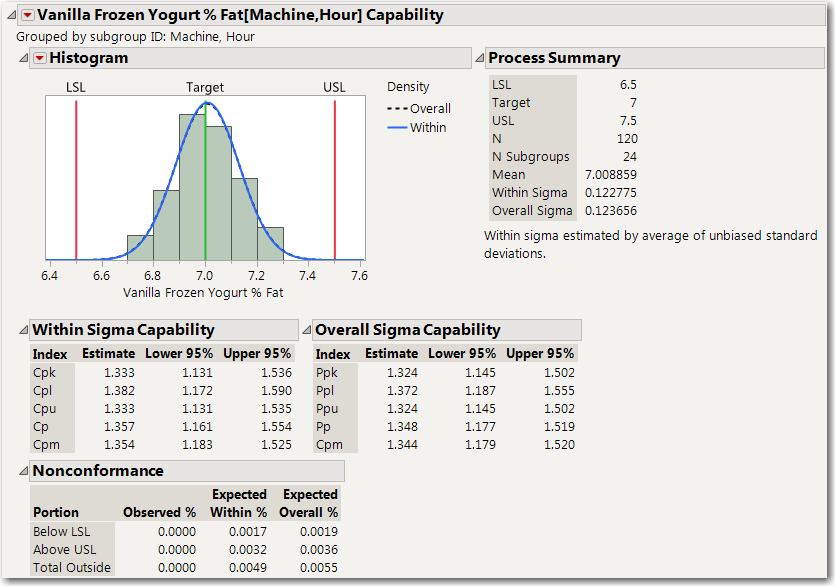 Tiger Paw Ice Cream Company needs to address the stability issue for its Tiger Tracks Ice Cream process for blending in the correct percentage of milk fat, but the Low-Fat Chocolate Ice Cream and Vanilla Frozen Yogurt processes appear to be capable for blending in milk fat. Even though the Low-Fat Chocolate ice cream process is capable, the company might consider trying to get the percent milk fat blending centered on the target value to save money and reduce fat content in the low-fat ice cream.

Nice example Laura of the combination of process capability and control charts to identify and prioritise improvement opportunities and potential causes, thank-you.

I have added the ice cream production data, completely invented for this example, to the JMP User Community File Exchange in Sample Data.

Thanks for posting this example. I would like to know how did you create the Xbar & S control chart in JMP. How did you get machine by hour in the graph shown above.

Thanks in advance for replying.

Thanks for your response. To get the "Hour in Machine" nested axis in the Xbar & S chart, I used Control Chart Builder. Here are the steps to get the nested axis: After you open the data and launch Control Chart Builder, drag "Hour" to the Subgroup drop zone along the horizontal axis. Next, drag "Machine" towards the bottom of the Subgroup drop zone (below where you see the text "Hour" on the horizontal axis). The text will change to "Hour in Machine" when the axis is nested.

I hope this helps.