In an earlier post, I introduced the Probability and Multiple Choice Profiler, two new tools in the Choice Platform that help visualize comparisons between competing products and predict market share for proposed new products. This post covers step-by-step instructions for how to open and use the profilers in JMP 12.

Let’s consider the pizza data from the JMP sample data library. There are two versions of that example that have the same information, but different data formats. Let’s start with the multiple table example contained in Pizza Profiles.jmp, Pizza Responses.jmp, and Pizza Subject.jmp. These three tables mimic how choice data are often collected, with one table detailing the different factors in the experiment, another that collects the responses, and a third table for demographic information on participants.

Running the script attached to the Pizza Profiles menu produces a report with Choice model effects and Likelihood ratio tests on the resulting estimates. (Note: JMP performs the likelihood ratio tests by default if they can be calculated quickly. If the tests are not produced by default, you can always request Likelihood Ratio statistics from the red triangle menu.)

The effect tests show which factors are statistically significant, and the signs on the parameter estimates show whether that factor makes subjects more or less likely to buy the product. From this report, we can see that Jack cheese is less popular than Mozzarella, and there is a statistically significant interaction between Gender and preferences for Thick crust and Pepperoni vs No Toppings.

The Utility Profiler (just called “The Profiler” in JMP 11) can help explain how these interactions affect consumer choices. Selecting Utility Profiler from the red triangle menu brings up the following:

Changing the Gender from M to F allows us to clearly see the effect of the interactions:

“How much more likely?” and “More likely compared to what?” are questions that your marketing manager might ask you. Until JMP 12, your answer might have been, “Let me get back to you.” Now all you need is the Probability Profiler. 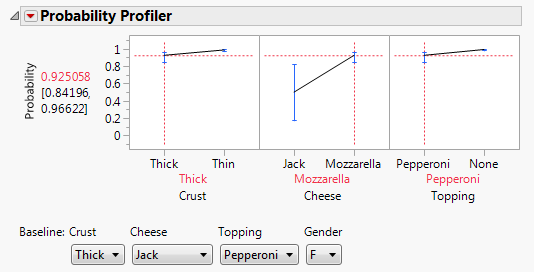 The Probability Profiler makes it easy to see that my proposed product is a good idea. When choosing between my pizza and my competitor’s, there’s a 92 percent chance that the “Female” market segment will chose mine. I can change Gender in the Baseline settings to M to see how the “Male” market segment will choose and see that males have a 96 percent chance of choosing my pizza. Settings related to subjects (i.e., people) will always appear in the Baseline settings so you’re always comparing apples to apples when you compare choice probabilities. 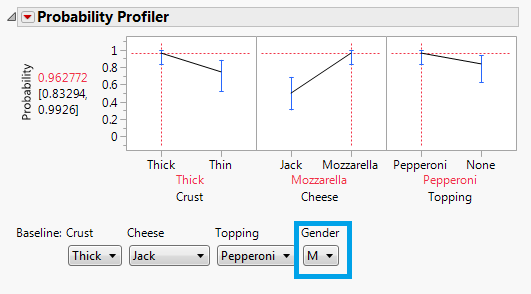 There aren’t many markets where consumers have only two choices. You might know about multiple competitor products and want to design the pizza with maximum choice probability against all of them. That’s a job for the Multiple Choice Profiler, which is in the red triangle menu just below the Probability Profiler.

Selecting Multiple Choice Profiler from the red triangle menu brings up a dialog asking how many choices you want to profile. Three is the default, but you can have more.

Now, instead of having one Baseline model and one alternative, the Multiple Choice Profiler produces a set of linked profilers — one for each alternative. The selectors at the top allow you to choose the values of the subject variables that make your market segments, and the profile sliders set the properties of the different products. There’s also a chart just below the header to visually show which product would have the highest predicted market share. 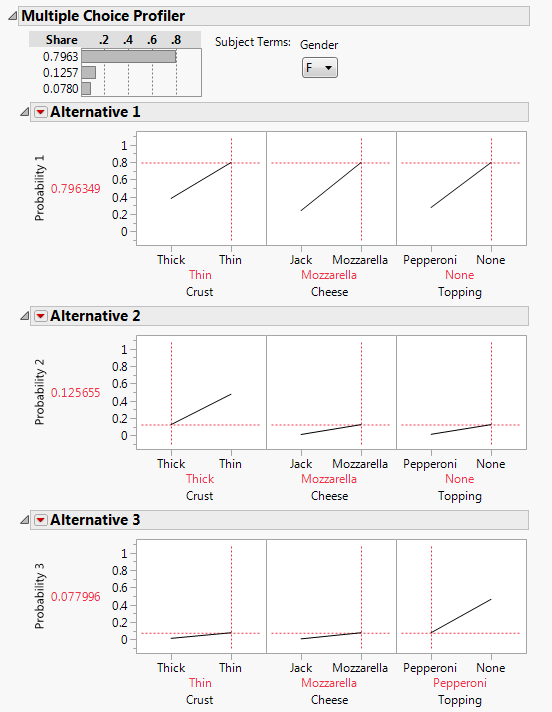 Now it’s easy to see that a Thin crust pizza with Mozzarella cheese and no toppings is a winner against the other alternatives.

All of the above examples have shown an analysis with multiple tables. If you usually perform a one-table analysis, JMP will place your subject effects in the Multiple Choice Profiler. (There is no way for JMP to know whether an effect was intended as a subject effect or a profile effect, so JMP makes the choice that has the most flexibility for you, the user.) 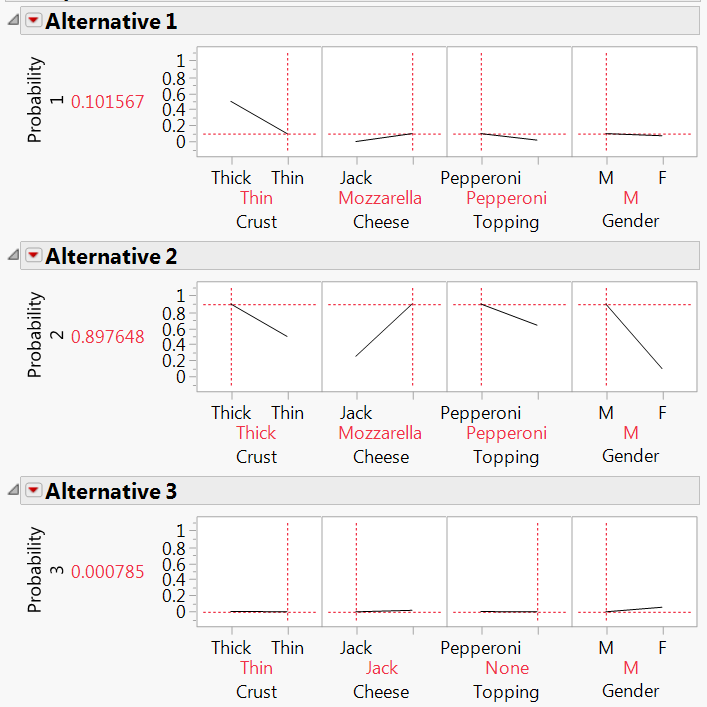 The Utility Profiler has always been a useful tool for visualizing your model. JMP 12 adds the Probability Profiler and the Multiple Choice Profiler, two new tools to help visualize comparisons between different products and predict market share for proposed new products.

This is a great addition to the choice platform. I really look forward to other additions in the future. Keep up the good work.