A common ingredient in potato chips is table salt, or sodium chloride. Suppose that you want to measure the weight percentage of sodium in a bag of potato chips. Here is one possible scheme for drawing samples of chips out of this bag and preparing them for measurement. In this example, the quantity of interest – usually called the analyte in chemistry – is sodium.

The following is a diagram that summarizes this scheme. 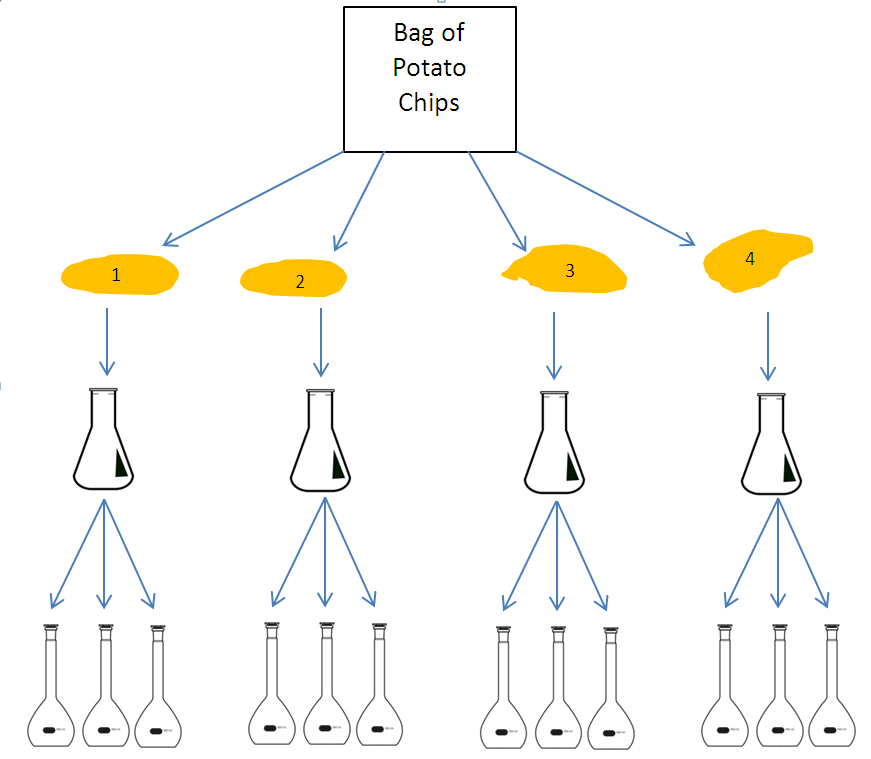 Here is a data set of measured weight percentages of sodium from the 12 aliquots; I obtained it from page 736 in chapter 29 of the 6th edition of “Quantitative Chemical Analysis” by Daniel Harris.

Estimating the true weight percentage of sodium in this bag of potato chips can be done in a relatively straightforward manner – simply pick a good analytical technique, build a calibration curve, and use inverse prediction to obtain a point estimate and a confidence interval. However, this blog post will focus on the variation that is introduced throughout this sample preparation process and how it can be minimized. This process is critical to minimizing the cumulative uncertainty for the final measurements of the weight percentages.

Entering and Transforming the Data

Let’s enter the above data set into JMP.

If you prefer to show the first aliquot under Chip 3 as 0.420, you can change this in the Column Properties. Highlight all columns, and then choose Standardize Attributes under the Cols menu. 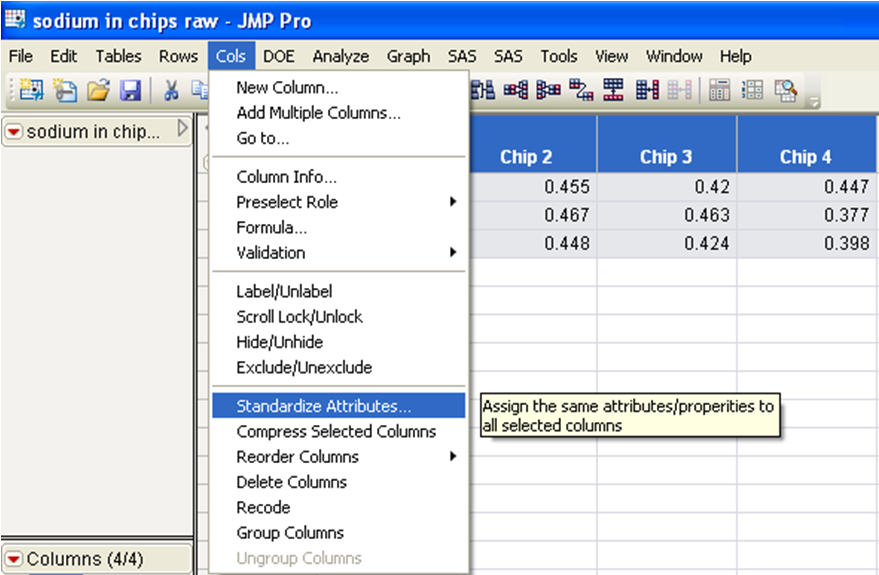 In the Attributes drop-down list, choose Format. This activates the Format for modification. 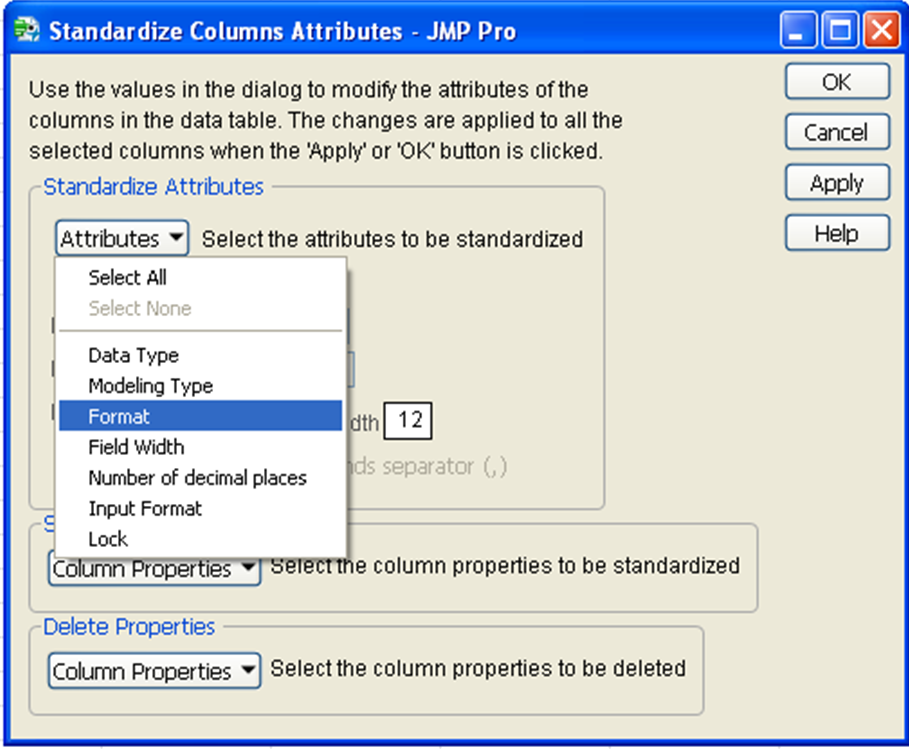 Change the format from Best to Fixed Dec. In the newly available Dec field, change the value from 0 to 3.

Notice now that the first aliquot under Chip 3 now shows 0.420.

As you will see later in this blog post, the layout of this data set is not ready for analysis in JMP. Instead, let’s stack this data set so that all data values are in one column, and another column indicates which chip each value came from. We will later use the Fit Y by X platform in JMP, and it requires the data to be structured in this stacked format.

Under the Table menu, choose Stack.

Under Select Columns, choose all four chip columns, and then click Stack Columns. This will ensure that all four columns will be stacked. I have also entered the new names of the output table, the stacked data column, and the source label column. 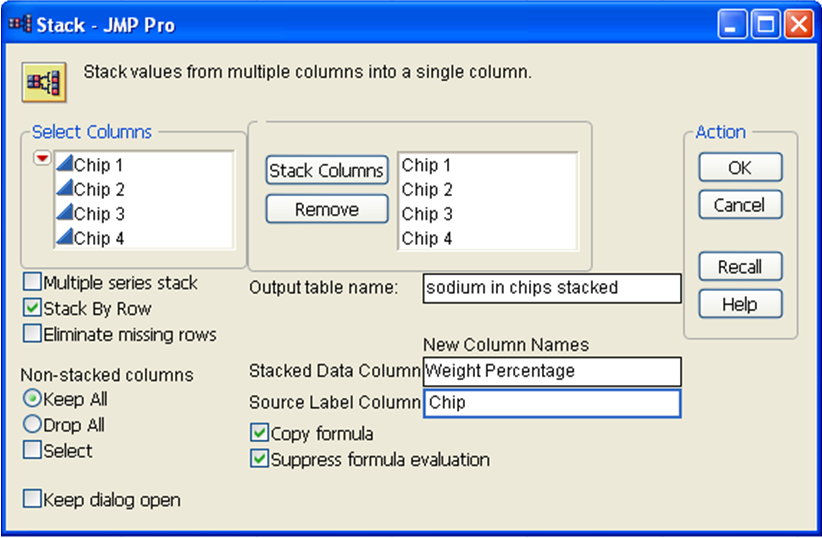 Here is what the stacked data set looks like. 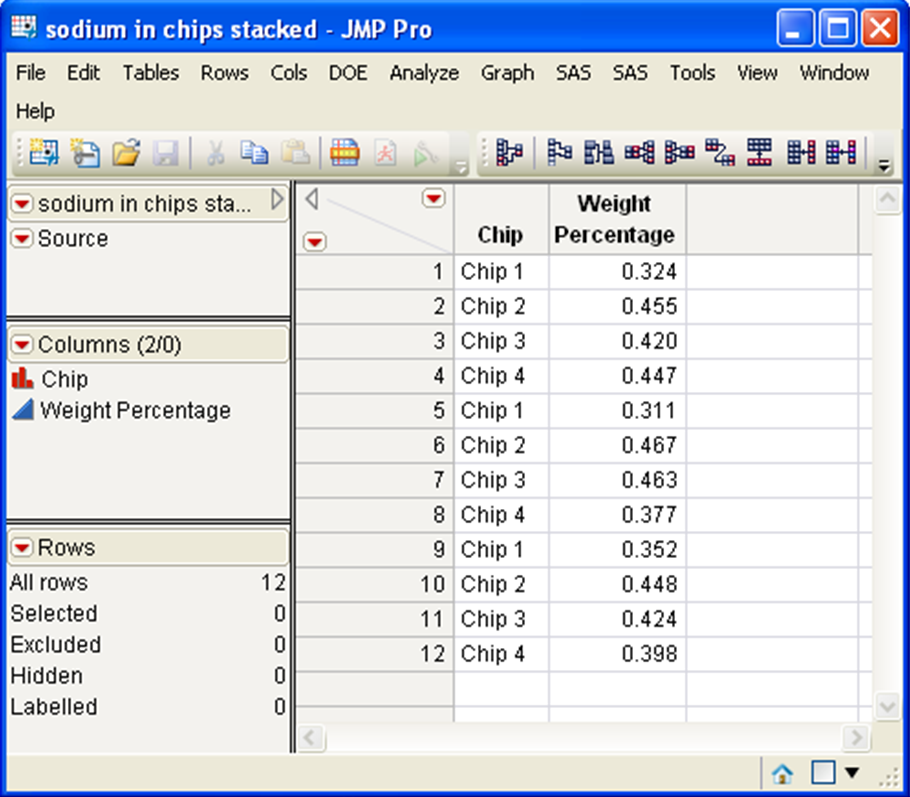 The data are now ready for analysis! In the next blog post of this two-part series, I will use the Fit Y by X platform to visualize the data and analyze them using ANOVA.

I will conclude this series by interpreting the ANOVA results to answer our original question about comparing the variation in the two stages of our sample preparation scheme.

The diagram explains itself well. Picture worth more than 1000 words after all.

I'm glad that you liked it, Shalin! I worked really hard on all of my visualizations in this series of blog posts, and it's gratifying to know that they illustrate the concepts well! Thanks for reading!