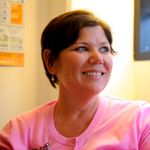 amy_bullock
Staff
Hunter and Salsburg on how statistics has evolved
Oct 15, 2012 1:32 PM 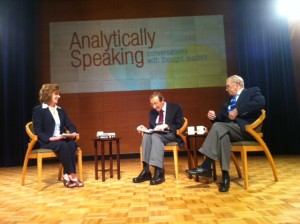 With the International Year of Statistics quickly approaching, what better way to prepare ourselves than by gaining a little perspective from those who have helped to shape the world of statistics in the last century?

This past summer, JMP's Senior Director of Analytic Strategy Anne Milley and I took a trip up to Yale University to conduct interviews with a couple of distinguished statistics celebrities: Stu Hunter and David Salsburg.

During our time together, here are a few interesting facts we learned about Stu Hunter and David Salsburg: 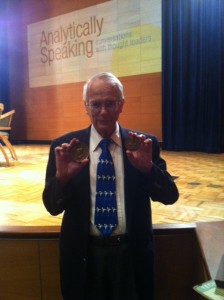 During the interviews, Stu and David also shared some fascinating stories about their encounters with other statistics greats — Gertrude Cox, R.A. Fisher, H. Fairfield Smith and George Box. To hear these stories and more, tune in Wednesday when their webcast interview will premiere as part of the Analytically Speaking series.

I hope you enjoy the webcast as much as we enjoyed producing it.