Sign In
Turn on suggestions
Auto-suggest helps you quickly narrow down your search results by suggesting possible matches as you type.
Showing results for
Show  only  | Search instead for
Did you mean:
Options
Choose Language Hide Translation Bar
1 Kudo

For time series data a hairline tool is a common way to show values across many charts at once.  In the screenshot below two static hairlines were placed on the chart and the third one moves with the mouse.  When activated in graph builder, or maybe in all open charts sharing a single dimension, put a line through all charts corresponding to the mouse position on a shared axis, and allow the user to drop or remove hairlines.  The user would choose an active hairline column in each table (likely a time or a sample number) and then all open charts using that dimension on an X or Y axis would display a hairline a that position and show corresponding values for all other variables intersecting that line. 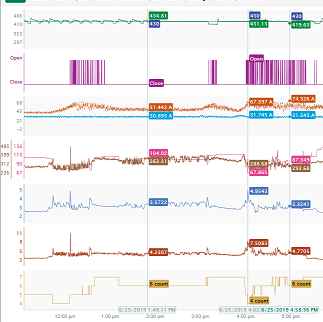 I am not sure if this could be a modification to the crosshairs tool or a new tool entirely.

Implementing this for a single graph builder report would be an acceptable compromise if accessing all charts is time consuming.