JMP's scripting language, JSL, can store numbers, strings, and other objects in variables. A string assignment might look like this:

the variable place now holds the string. Here's a set of functions for working with strings in JSL. Place will keep that same string in all the examples. Regex and Pattern Matching are covered in later posts.

Concatenation - put two strings together, end-to-end. Or more than two...

Length - how many characters are in the string?

Contains - what part of the string contains this text?

Notice how positionB is found starting one character after positionA. Otherwise the first comma at positionA would be found again. Contains returns a position of 0 if the search fails, making if( contains(...), ... ) work nicely.

Substr - part of the string, starting at a position, for a length.

Notice the space after the first comma has been captured too. If you leave out the length argument, substr goes to the end. There is also a rule for a negative starting position:

-3 means start 3 characters from the end.

positionA is 5, the position of the first comma; "Cary" is the 4 characters before the comma. There is a third argument for filler text:

Notice how enough of the filler text is added to provide the requested 15 characters from the left of "abc". Space might be a better filler choice. Without the filler the result is just "abc".

Use Substr instead of right if you have a position

Substr doesn't require a third value for the length; it will go to the end.

You could use Right with a position and the Length function, but by the time you've explained about subtracting a position from a length, it will be more complicated.

Munger - jack of all trades...

Munger munges together search and replace. It isn't as clever or well known as Regex, but is easier to understand, once you get the hang of it. No one else will be able to figure out what your JSL is doing without a manual, so you might want to skip it.

Here's a table that attempts to explain the various combinations of textOrLength and optionalReplacementText. All the examples use 3 for the starting position, skipping over the initial "ab". Notice the fourth example finding the second "b".

Data table column formulas can compute a value from another column. Here's a "last name, first name" example that assumes the comma is a unique delimiter. This example works for the "onlyname" case because of the way Left interprets any out-of-range length as everything. Look for the Regex post, you might like it better. 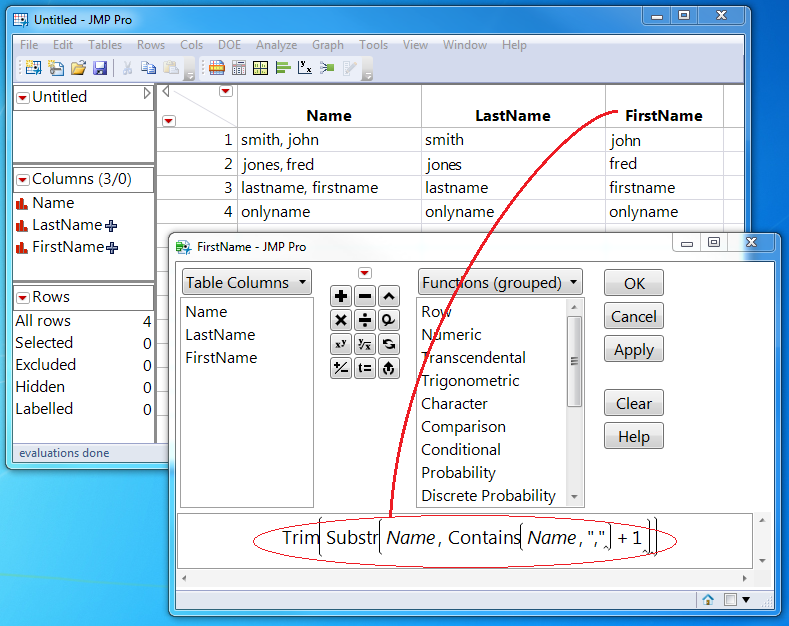 Great writeup! I have found the character/string handling functions in JSL to be very useful for a variety of projects.