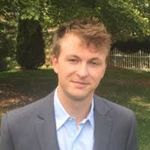 The Basic Linkage Mapping Workflow in JMP Genomics creates linkage maps using genetic marker data. The workflow includes output from the Recombination and Linkage Groups, Linkage Map Order, and Linkage Map Viewer. This includes calculation of recombination frequencies, testing for segregation distortion, assigning linkage groups to sets of markers, generating visualized linkage maps, and reordering the data according to the linkage map for QTL analysis. This example will use oat data with around 450 genetic markers from 90 recombinant inbred oat lines.

*The interactive reports generated from this workflow can be viewed on JMP Public.

The Basic Linkage Mapping Workflow performs several useful analyses using recombination frequencies to place markers into linkage groups, calculate their segregation ratios, and display linkage maps. In this example, we began with marker data and a framework map which assigned certain markers to predetermined framework groups. Note that the framework map, as well as annotation data, are not required to run the linkage mapping workflow. Now that each marker has been placed into a linkage group and the distances between each marker has been estimated, QTL analysis can be performed. For information on that process see the post titled Genetic Association with JMP Genomics, Part 5: QTL Single Marker Analysis.