When I create a design, the first place I typically look to evaluate the design is the Color Map On Correlations. Hopefully, I see a lot of blue, implying orthogonality between different terms. The Color Map On Correlations contains both the model terms and alias terms. If you have taken a design of experiments/linear regression class, you may be familiar with the idea that correlation among predictors inflates the standard error of the estimates. However, the majority of the familiar design diagnostics relate to the model terms. What about if we have missed some terms in our model? Not surprisingly, if we are missing terms in the model, these terms can still affect our results. Fortunately, we do have a way to assess this for those terms specified in the list of alias terms.

What effect do missing terms have on the model estimates?

We will dig into the technical details below, but the takeaway message is that active terms not in the model can bias the estimates of terms in the model. If a missing term is specified in the list of alias terms, the Alias Matrix gives us a means of quantifying that bias. The rows of the Alias Matrix correspond to each of the model effects, while the columns represent the different alias terms and how they influence the expected value of the effect estimate for each of those model effects.

If you have taken a class involving linear regression, the following model probably looks familiar:

where Y is the vector of responses,

the vector of model coefficients, and

the vector of random errors, which we assume to be centered around zero. We call X the model matrix, where the rows represent the runs of the experiment and the columns correspond to the settings for the model terms based upon the settings for the factors in the design. In Custom Design, you can have the model matrix saved to the data table by selecting “Save X Matrix” under the red triangle. To estimate the vector of model coefficients, the least squares estimate (the Standard Least Squares option you find under Fit Model) is

Assuming the model is correct,

is an unbiased estimate of

the expected value of

But what about if our model is missing some terms? These may show up after analyzing the data, but ideally we could think about this in the design phase. This is where the Alias Matrix comes into play. The set of these terms that are not in our model but may affect the response are called the alias terms. Let Z correspond to the model matrix for the set of alias terms, with the vector of corresponding effects

. That is, Z has the same interpretation as X, but for terms we are not estimating. Now, assume the model is actually

but we still fit the model using X. After doing some linear algebra, we find

the Alias Matrix. If all the entries of

are 0, meaning none of the alias terms specified affect the response, then

is still unbiased. If the elements

are not negligible, then we want the entries of A to be as small as possible.

Can you give an example?

The following figures are the Color Map On Correlations and the Alias Matrix for a four-factor, 12-run design for a model to estimate the main effects and using the two-factor interactions as alias terms. 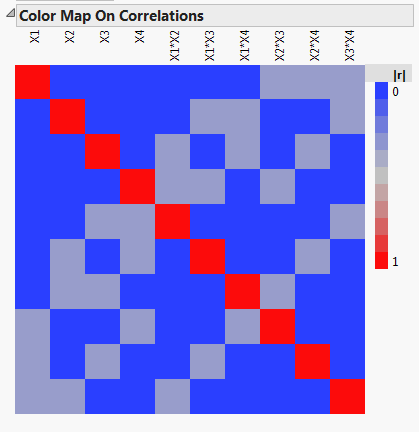 , and the two-factor interaction for X2*X3,

The bias can go in the other direction as well. If

, then the expected value of

is 2, twice as big as its true value. So, depending on the direction of the aliasing term, you could miss an active main effect or mistakenly think a negligible main effect is active.

Is it really as bad as all that?

In general, main effects are more likely to be significant than interactions, and tend to have a larger magnitude when they are. However, as you increase the number of factors, the number of possible interactions increases quickly. If bias from the many two-factor interactions is a real concern, and you do not have the resources to add these terms to your model, you do have a choice – Alias Optimal designs.

Just two additional tips to follow a great article. First, you can hover over a square in the Color Map of Correlations and JMP will present a legend. The legend identifies the two terms represented by the square along with correlation, in case you want to be sure you are looking at the correct square and you want a the value. This feature is handy if you have many terms and alias terms to consider in this map. Second, you can right click on the Color Map on Correlations and select Color Scheme... > Choose... to change the heat map coloring. We often print training materials in black and white. We find that the default blue to red color scheme is not effective when converted to a grey scale during printing. If we first change the color scheme to black and white, them JMP produces a sharp map that prints as well as it appears on the display. Try different color schemes to help you interpret this informative map better. (I'm not suggesting that the default color scheme is bad. Just that you have a choice so see if there is a better one for you.)