Has it been much hotter than normal? Let's get the data and find out!My father-in-law asked me this question with sweat on his brow and desperation in his eyes in our non-air-conditioned house sometime in late July, during a seemingly relentless heat wave. My in-laws moved from Oregon to the Denver, Colorado, area last fall to be closer to the grandkids. I wondered whether this hot summer has made them question that move.

My wife and I, somewhat frightened that the heat might outweigh the draw of our children, both quickly answered, “Oh, no! This is much hotter than normal, and it normally cools down at night more.”

My father-in-law gave me a skeptical look and asked, “Are you sure?”

He was right to doubt us. In the words of Dr. Deming (or maybe someone else), “In God we trust, all others must bring data.”

So, is it typically this hot in the summer?

Getting the answer to this question seems straightforward: Go to one’s favorite weather website and look up the average weather for the summer months. Take this data and compare it to the weather for the current month.

Then I saw an article about July 2019 being the hottest month in recorded history. The data shows that the 10 hottest years on record (dating back to 1880) have all occurred since 1998.

Not only have the hottest individual years occurred recently, the 2000s and the 2010s have been the hottest decades on record.

Should we be looking at all the historical data to determine what to expect for this next summer’s weather? The graph below shows the average high temperature of Denver in July. We can see there is a trend upward. While 2019 was hotter than average and above the trend line, it was cooler than 2016 and 2017, and much cooler than the hottest July on record in 2003.

I pulled data from several other cities (Austin, Chicago, Los Angeles, Minneapolis, New York, Portland, Raleigh, San Francisco, and Washington, D.C.) to see if Denver is heating up faster than average, or if the trend is similar in all these places. Below are the average high and low temperatures of all those cities throughout the year by decade. I filtered out results before 1950 since not all the weather stations have complete data from the 1940s. I also filtered out 2019 since the data is not complete.

If we look at the trends of each of these cities in the graph below, we can see that Denver is heating up slower than most of the other cities in this group. Just in case my in-laws are considering a move back to Oregon, I noted that Portland is heating up the quickest out of all the cities that I picked.

If we focus on July specfically, we can see the trend is a little different for some cities

In conclusion, this July in Denver the temperature was hotter than typical, but the trend line shows that this type of hot temperatures should be expected in the future. It was time to face the music. I called my father-in-law, Tom.

Me: Hi, Tom, I have good news and bad news on Denver’s summer temperatures.

Tom: OK, what did you learn?

Me: I am so glad you asked.

I went into a lot of detail of how I pulled data and looked at average weather, and discovered how it has been trending up in the past two decades. Knowing how enthusiastic my wife was about all my JMP projects (like this one or this one), I assumed my father-in-law would feel the same way.

Me: July 2019 was hotter than average, but the trend showed that those high temperatures should be expected.

Tom: Interesting. What does that mean?

Me: The bad news is these hot summers are likely to continue. The good news is that your question, along with the data, inspired us to finally get air conditioning after 12 years of living in Denver.

Tom: Well, that is good. Your house has been hot this summer.

Phew! That was not too terrible of a phone call. Hopefully, we can have a nice long cool autumn, and fingers crossed that my in-laws won’t be scared off by snow in early October.

If Portland is heating up at a faster rate than Denver, how old will I be before it’s cooler in Denver than Portland in July?

Assuming the trend lines continues in the same fashion it has since 1950 by the year 2107 Denver and Portland will have the same average high temperature throughout the year so 88 years from now.  For highs temps in July only Portland won't catch Denver until the year 2454.  Portland is heating up really quickly in the Month of August it is projected to catch Denver in 2086. 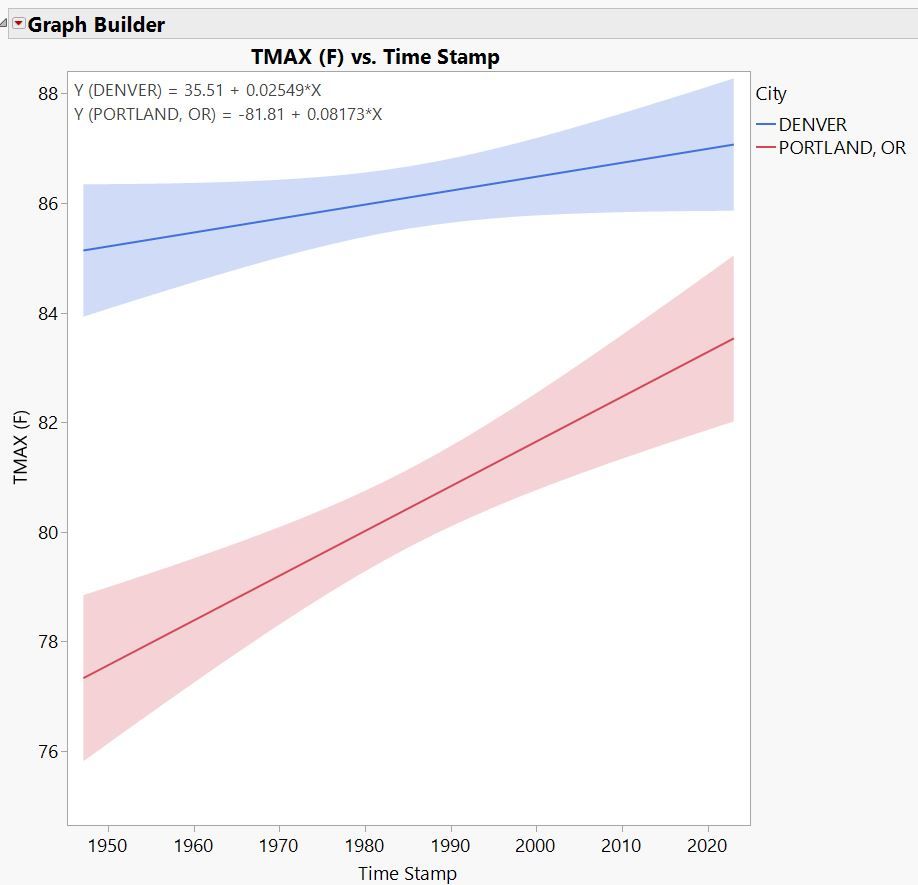 Peter, I see you signed up a new User Community member!