I had posted this question in a previous Discussion that had ended in 2012, so I am re-posting it here. Basically, I would like to use the Consumer-categorical platform for what is essentially a categorial repeated measures ANOVA:

My responses are essentially color scores that range from 2-6. I probably could use a more typical approach since they ARE integers, but they are constrained between 1 and 6, so I would need to use a different distribution, and I don't know if the mixed model platform can handle data that have strange distributions. In this case, individual subjects were scored repeatedly over time, so I used the "multiple response by ID" for my sample ID, "color" for my score (i.e., the Y), and "time" as the repeated measure. I want to see how light influences the scores, so "light" is the X. I get lots of nice displays of hows vary by subject in response to light, but I don't get any test statistics. I looked under the red triangle and saw some tests, but they don't seem to be looking at overall treatment effects, but instead within-subject effects. Can this Consumer-categorical response give you treatment effect data (i.e., p-values that show me the light effects in this case)? Now, to be honest, I could probably just calculate the difference between the final score and the initial one and use a more traditional approach, but I am curious as to whether you CAN use this Consumer platform to get quantitative treatment effect data. When you click "show letters," is that showing you differences between the individual means? Perhaps the Consumer-categorial platform is only meant to depict qualitative differences, with another approach, like logistic regression, for quantitative ones.

It is also possible that, since the model input features in this platform differ fundamentally from those I am familiar with under "Fit Model" I simply entered in my arguments wrong (see attached image). I would send the data table, but you cannot save Consumer-categorical scripts for some reason (I will soon post this as a wish-list item, though). 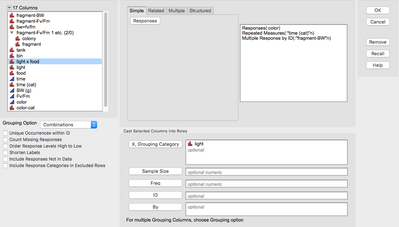 You are correct in that the categorical platform has a unique structure. What you set up was 3 analyses - not one.   The structure of the platform is based on the structure of your responses, so it is designed for survey type data where you are trying to analyze categorical data, perhaps grouped by one or more x's.  Take a look at this example for an overview of how the platform works (Example of the Categorical Platform ).

Also the save script commands are under the Categorical red triangle.

Thank you for your response. I am going to go through the link you sent. It seems like it could be used for repeated measures on the same subjects over time, so now I just need to figure out how to input it. Also, that's weird that I can't save the script under the red triangle (the first place I looked). Maybe it's because I have been using the beta version of JMP Pro 16. I will try it again on JMP15! 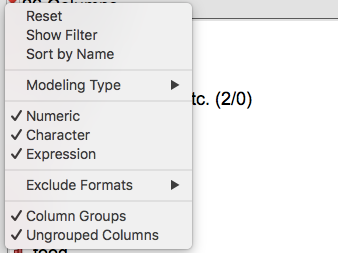