Sign In
Turn on suggestions
Auto-suggest helps you quickly narrow down your search results by suggesting possible matches as you type.
Showing results for
Show  only  | Search instead for
Did you mean:
Our World Statistics Day conversations have been a great reminder of how much statistics can inform our lives. Do you have an example of how statistics has made a difference in your life? Share your story with the Community!
Options
Choose Language Hide Translation Bar
47 Kudos

As computing has advanced, I've gone from 1 core to 2 cores to 4 cores... to 64 threads on my workstation. Meanwhile .jsl has effectively remained single threaded. I know some platforms will utilize all threads, but I'd like to be able to farm out simple jsl operations at will to multiple threads. For example, if I have a script which operates row-wise on 10,000,000 rows of data, if I'm iterating by row in a for loop and I know each row's result is independent of the other rows, I'd like to split that operation into 64 asynchronous for loops, pause other execution while the 64 loops complete in parallel, then move back to a single threaded, synchronous script after all are complete, much like I would in .py with Pool() and poolObject.join.

As far as farming out simple JSL operations to multiple threads, there is a function called Parallel Assign() for that.It breaks the work into chunks where the code for each chunk results in a single number, and the result of the entire operation is a matrix of numbers.

There is a toy example in the scripting index for Parallel Assign(), and the second example for Frame Size() shows a more elaborate example for computing Mandelbrot set data. Another small example is in @Craige_Hales's JSL Cookbook post on loops and there's more about Mandelbot in his blog.

I've included another example below which finds the largest file in a list of files using multi-threading. The script runs a single-threads version first, and you can see both spurts of activity in this task manager screenshot. The single-thread version is the long mesa and the parallel version is the tall peak. For 17,000 files on 8 cores, the time went from 13s to 4.5s, or 3x faster. Not ideal, but as is often the case, the threads are sharing some resources, such as the disk access in this case. 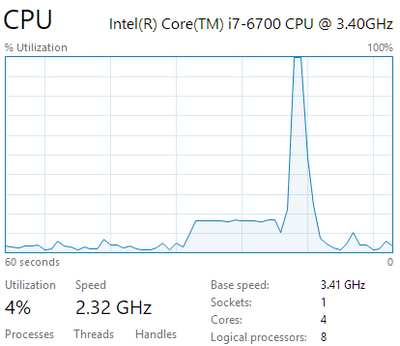 The JSL that executes in parallel does need to be simple so that it doesn't modify the shared global state. That's why some globals are copied in as the first step. It also means that the parallel code can't do things like create data tables or interact with the display.

We're interested in knowing what kind of other simple actions where we might need a richer interface. One that I know of is for each worker to return items other that numbers. Essentially, that would mean using a list for the results instead of a matrix.

While this wish has many votes, unfortunately anything more than what is offered by Parallel Assign() will be difficult to deliver. Because of the tight integration with the user interface, and the interactive nature of JMP it is not possible to provide a thread-safe environment without limiting the possible JSL down to essentially what Parallel Assign allows.