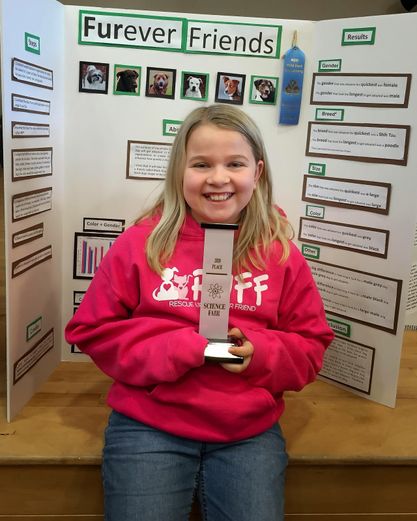 Carah Gilmore entered her school's science fair competition and advanced to higher levels with her project analyzing data about pet adoptions. (Images courtesy of Ryan Gilmore)Here at JMP, we love pets. So we were thrilled to hear that a young scientist used our software to explore data about pet adoptions from local animal shelters. The project is adorably titled "Furever Friends."

How young is this scientist? She is 10 years old, and her name is Carah Gilmore. Her father, Ryan Gilmore, works at SAS as a Senior Application Developer.

Carah's school, Mills Park Elementary in Cary, NC, strongly recommended that students take part in science fair, so Carah chose a topic that would help a charity dear to her heart.

"My dad and I take pictures for an organization named Rescue Ur Forever Friend to help pets get adopted quicker. I was wondering how I could help, so I thought of this project – what factors determine how fast a dog gets adopted," the rising sixth-grader says.

To identify those factors, she needed some data. She was able to get data from Rescue Ur Forever Friend and Second Chance Pet Adoptions. Ryan says the final data table had around 1,400 rows and 12 columns.

Ryan had worked in technical support for JMP and therefore knew the software very well. That's why he decided to teach Carah how to use Graph Builder and Tabulate to perform her analysis.

But before starting on her analysis, Carah had to do a bit of data preparation.

"The data from both organizations was given as Excel files. Carah combined the data into a single Excel file, which was then imported into JMP. New columns were created to compute the length of stay and age of the animals. Other columns were also created to categorize the dogs based on color and breed," Ryan says. 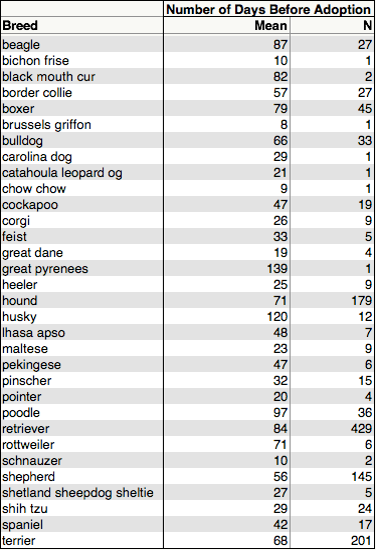 Carah had looked at adoption time by breed.

Black Dog Syndrome is the idea that black dogs spend more time waiting for a new home than lighter-colored dogs. Carah aimed to test that hypothesis and see what else she could learn.

"My results showed that it took longer for black dogs to be adopted," Carah says. 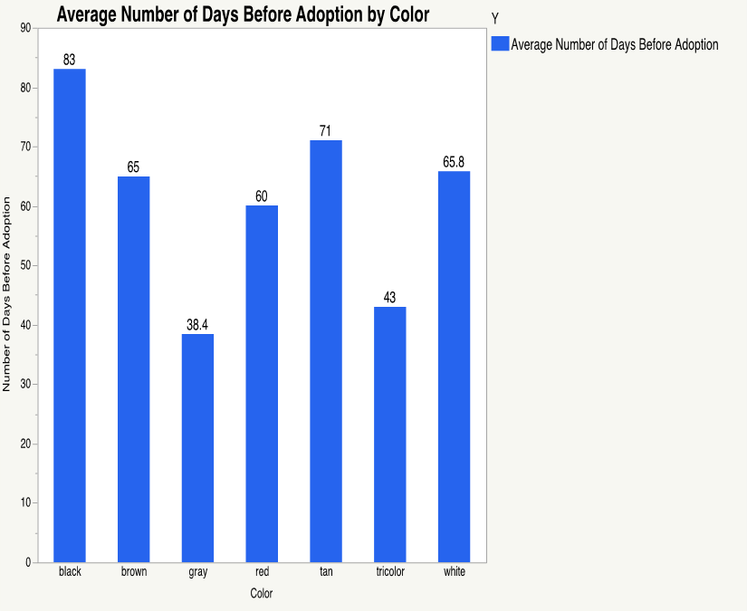 Carah's graph from her science fair project showing that black dogs take more days to get adopted than dogs of other colors.

Carah also found that female dogs were more quickly adopted than male dogs. As might be expected, large dogs took more days to be adopted than medium or small dogs. But what's surprising is that extra-large dogs spent the fewest days in the shelter before adoption, when looking at size alone.

Competing at science fairs, and beyond

At her elementary school science fair in January, Carah placed third, which qualified her to compete at the regional science fair the following month. She placed in the top eight among more than 100 students there and competed at the state level in March. While she did not place in the state competition, she did learn a lot along the way and helped spread the word about pet adoption.

What was the best part of doing this project for Carah?

"Helping the organizations. Creating the formulas and graphs in JMP. Also, finding out how long it does take different dogs to get adopted," Carah says.

The science fairs are over for this year, but she hopes all who have seen her findings (including you, dear reader) will "try to adopt a rescue dog and take a look at the black dogs because they’re just like the other dogs.”

Good for you, Carah! Will you do a follow-on project next year? I'm fond of black cats and have a friend who says she adopts only black cats. I wonder if there's a difference between cats and dogs? I hope you'll let us know what next year's project reveals!

Thanks for sharing your story with us :-)

Very cool project! While my "kids" didn't come from shelters, they are all strays -- all 3 are black. Black dogs rock! Keep up the good work Carah (and Ryan)!

This is awesome, Carah. Your research can help these dogs find forever homes! Good for you for actually doing something about this problem.

I've adopted dogs from shelters in the past - Rescue Dogs really are the best!

Very interesting.... Excellent work Carah, and thanks for sharing! :-)

Love this project and much as I love dogs! Great work!

Very interesting! I just heard about the Black Dog Syndrome yesterday when I was watching the Dog Whisperer. How neat a 10 year old has tested this hypothesis and found it to be true and used the power of JMP! Awesome work!

Very nice! this is my neighbor .. Very interesting to use JMP for this. Excellent work Carah!

It is too late for this year. However, you might want to consider submitting a project or poster to the Joint Statistical Meetings (JSM) contest for K-12.

Great job on your project! Thanks for helping to promote people to adopt versus purchase from a breeder. I have always rescued dogs and they are the best.

Great project, Carah. My family adopted a Second Chance dog, about 40 pounds, and black. We had her for almost 15 wonderful years and she was a great girl. I love your volunteer spirit and desire to help pets find their forever homes.

Wow Carah. So cool. I have never heard of black dog syndrome and I'm happy to report I recently adopted a rescue puppy, who happens to be black and a male. We picked him because he was so sweet and the perfect puppy for us!

Excellent work Carah and the Gilmore family for teaching Carah the basics of BI / Analytics!

Awesome work Carah... this is a great project and a great reminder to adopt your furever friends!

[…] Dog Syndrome was explored by 10 year-old Carah Gilmore, who used information cognisance program to investigate and benefaction information that would […]

Thanks for your comments, everyone. The News & Observer of Raleigh, North Carolina, just published a story about Carah, and there's some new information there: http://www.newsobserver.com/news/local/education/thumbs-up/article47084265.html