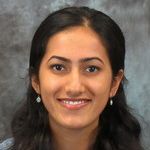 Treemaps are unique because they show values of a variable as contiguous rectangles. Moreover, a treemap can show the magnitude of a measurement by varying the size or color of a rectangle. So, not only can we see the states that have the largest percentage of its population taking the exam (size), but we are also able to figure out which states have grown the most (or not grown) from 2012 to 2013, by the color. 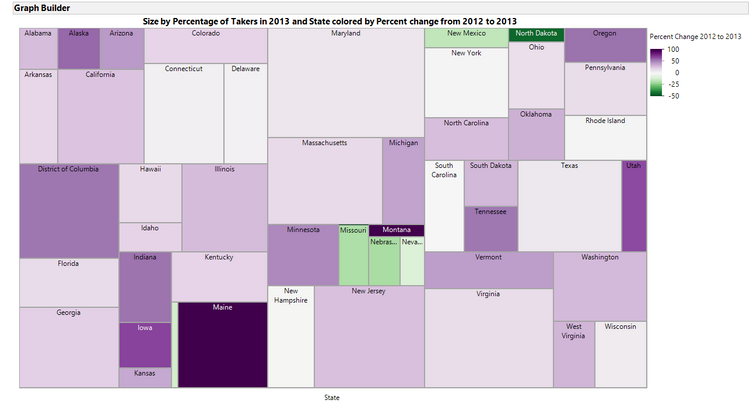 I would like to point out that there were states that had a percent change greater than 100% and less than -50%, but I decided to keep the scale the way it is to be able to see a better color variation. To me, it was more important to grasp the general idea than the specific statistics.

Right away, we can tell that Maryland, Virginia and New Jersey are front runners in terms of having a large percentage of their population taking the AP computer science exam, but none of them have had significant growth from 2012 to 2013.

States like North Dakota, Nebraska, New Mexico and Missouri have a small percentage of their population taking the exam and have not expanded their computer science programs from 2012 to 2013.

Finally, Maine, Iowa, Montana and Utah, although not large, are making an effort to increase the number of students in AP computer science classes and exam registration.

I used a line chart with points to visualize the change over time in the total number of students taking the exam nationally from 1998 to 2013. To create this chart, I first had to refactor the primary data, since “Year” wasn’t a column I could use as an axis. The raw data was set up so that “State” was a column and every year from 1998 to 2013 was its own column. Like this:

I wanted to arrange it so that "Year" was one column, and every state had its own column. Like this: 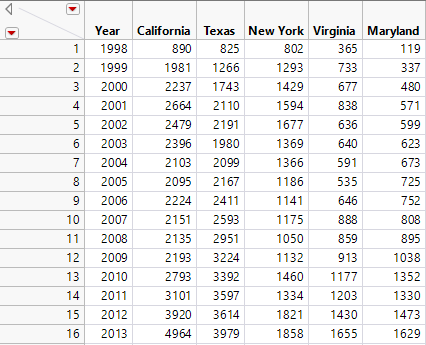 I used JSL to create a new data table, populate the “Year” column and create a new column for each state. But I was stuck on how to flip the data so that columns become rows. Then I came across the Transpose option under Tables in JMP. Transpose allows a user to create a new data table with the rows and columns of the active data table interchanged. This was exactly what I was trying to accomplish! I selected the columns 1998, 1999, … 2013 as the columns to be transposed, and voila!  In hindsight, I didn’t even have to use JSL to create the column headers. I could have just specified the “label” column to be State and would have had the same result with less work.

Using the information from this new data table, I could create the following chart. 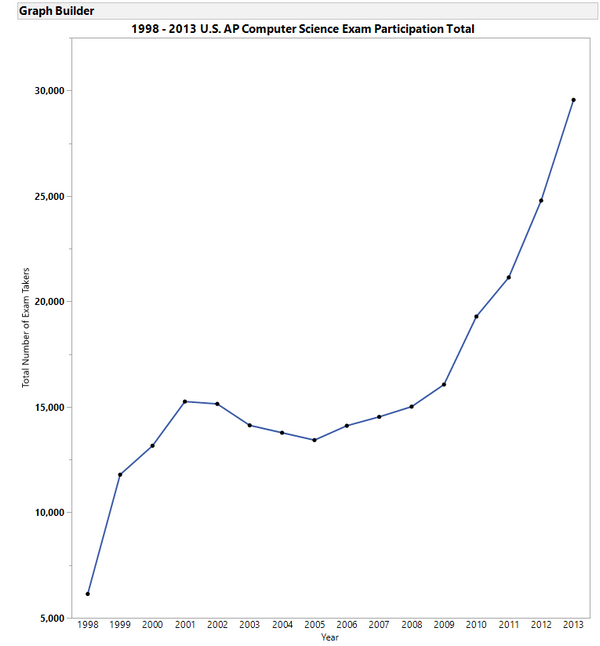 This simple line chart shows the increase in AP computer science exam participation from 1998 to 1999, then somewhat of a plateau until 2009 and a steady rise from 2009 onward.

Using a Column Switcher with a geographical map led to a cool visual. The Column Switcher let me quickly analyze the number of exam takers from each state by year, without having to recreate my analysis for each year.

Using 1998 Population Estimates from the US Census Bureau Website, I gathered all the data I needed for an eye-opening visual: a side-by-side map of the number of exam takers out of 100,000 by state in 1998 and 2013. 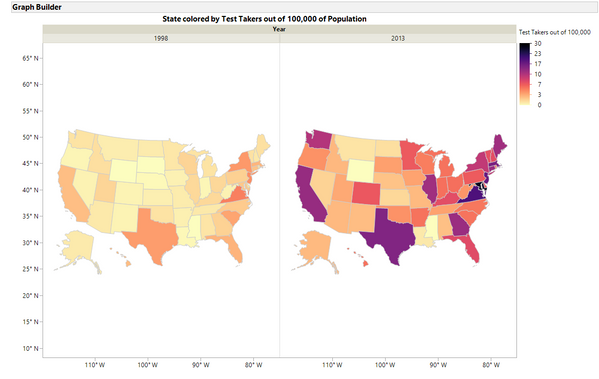 I like the side-by-side map because it is easy to see that nearly every state has had an increase in the percentage of its population taking the exam since 1998.