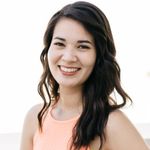 We took our Variance matrix (called the sums of squares and cross products) and partitioned it into two matrices: The “between” matrix, which represents the variance of our group mean vectors around the overall mean vector, and the “within” matrix which represents the variance of the data vectors around their group mean vectors. We’ll call these matrices H and E for Hypothesis ("between") and Error ("within").

I left you with a cliffhanger about how to conduct a hypothesis test with these matrices, and now I am here to deliver. 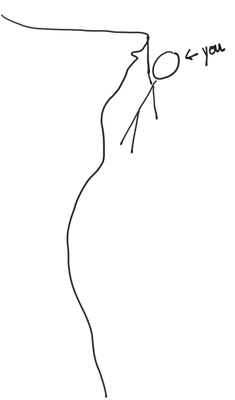 Let’s talk about hypothesis testing in a MANOVA.

The ANOVA uses the partitioned 1d (one-dimensional, not OneDirection) variance to create an F-ratio comparing variance between groups to variance within groups. The MANOVA does the same thing, but we start with a matrix of variance and covariances. 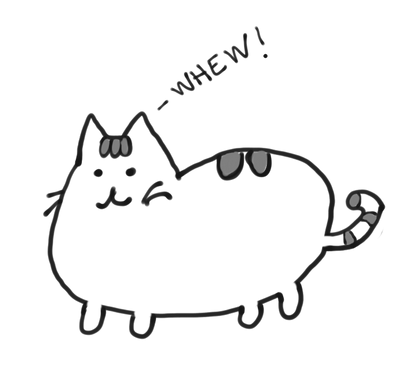 We want to compress a matrix into one number so that we can compare it as easily as we compare 1d variances in an ANOVA. But there’s many ways to skin a cat…I mean…compress a matrix, and all of them are valid. Perhaps for this reason, there are many test-statistics for a MANOVA. We’ll talk about four – that’s right, four – of the most common.

A matrix is really a transformation because when you multiply something by a matrix, it moves and stretches that thing. For example, the matrix

and changes it to the vector 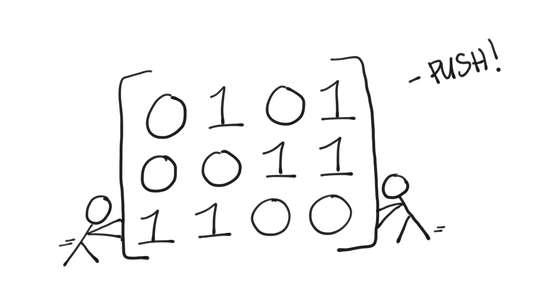 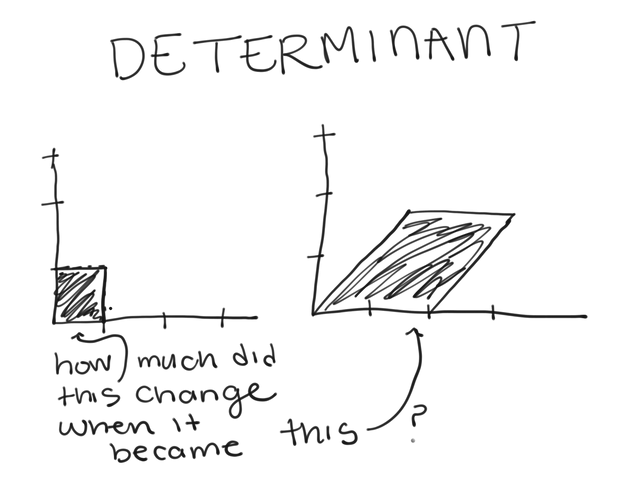 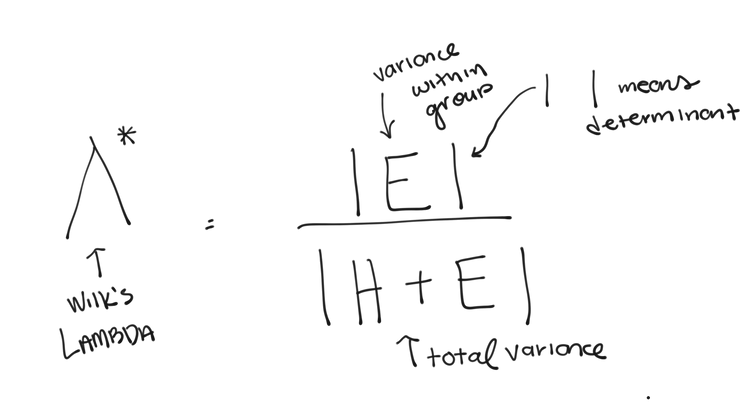 The next two test-statistics use something called the trace of a matrix, so a quick recap before we start.

Eigenvalues each have a matching eigenvector. When we think about a matrix as a transformation that takes in an object and stretches it; the eigenvectors represent the direction (or axis) that the object is stretched, and its eigenvalue friend tells you how far it’s stretched. The determinant is the product of all the eigenvalues, the trace is the sum of them. While they don’t give us exactly the same information, the source is the same.

All right enough about traces. Let’s look at the two test-statistics that use them: the Hotelling-Lawley Trace, and the Pillai Trace. Oops, I guess we’re still talking about traces.

The Hotelling-Lawley version takes the trace of the matrix

If H is large compared to E, then the Hotelling-Lawley trace will be BIG, unlike Wilk’s Lambda, so we reject when the trace is significantly large.

Similarly, the Pillai version takes the trace of the matrix

Remember H+E is the total amount of variance, so again, if H is large compared to the total variance matrix (H+E), then the Pillai trace will be large.

The fourth and final test-statistic is also a derivative (not in the calculus sense) of the eigenvalues of our H and E matrices, but this one is a little simpler. Roy’s Maximum Root is the maximum eigenvalue of

An eigenvalue is a “root” of the characteristic polynomial of a matrix, more on that here.

will be large if H is large compared to E. But since we use only the largest eigenvalue instead of some combination of all of them, Roy’s Maximum Root often overestimates an effect. So, if you ever run into a case where none of the other test-statistics are significant but Roy’s Root is, the significance of Roy’s root is most likely a false positive and should be ignored.

That’s it, you’ve made it through all of test-statistics and matrices, and we’ve nearly reached the end of this article. You may notice that I haven’t covered p-values here, but your statistical software will give you a p-value associated with each of these test statistics based on each of their distributions.

In JMP, running a MANOVA is just as easy as running any linear model. You put all of your outcome variables into the Y box, your predictors into Model Effects, and switch the Personality to MANOVA.

Once you click Run, JMP will  pop open a window for your MANOVA, but you've still got to choose your Response Specification. For a basic MANOVA, JMP reccomends choosing the Identity option, but see here for other contrast matrices you can use.

With the contrast matrix  chosen, you'll now see your beautiful MANOVA test statistics pop up in the window. Just like with the ANOVA, you'll see a test for the Whole model, the intercept, and one for each effect you've put in your model (here we only have one, group). 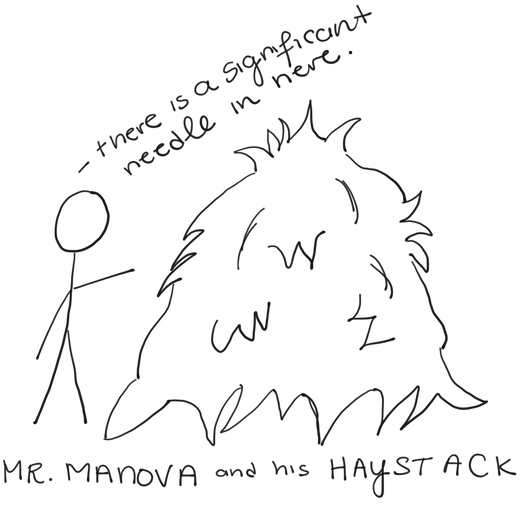