“America’s health-care system is neither healthy, caring, nor a system.” – Walter Cronkite

The US health care system is not the most efficient system for delivering health care effectively. To improve the system, a lot of insurers are exploring a value-based care model. The idea behind this model is that providers will be reimbursed based on outcomes. This is in place of the traditional fee-for-service (FFS) model that pays providers based on services. The thought is that the FFS model sometimes leads to superfluous tests or treatments.

I personally think this is great idea, and it got me wondering: What if countries did this? I decided to dig into the data for health care costs and results from countries around the world. This data comes from the World Bank and shows health outcomes like life expectancy, infant mortality and maternal mortality rates by country. It also has the average health expenditure per person normalized to 2010 dollars. This health care expenditure is what we will use to calculate the return on investment.

First, let’s look at the data for each country looking at health expenditure vs. life expectancy dating back to 1970. Since both factors are changing over time, this is an excellent opportunity to utilize a bubble plot. In 1980, the United States had similar health care expenditures to Denmark, Switzerland and Germany: in the range of about $2,200-2,600 (2010 dollars).

Fifteen years later, the United States is paying over $1,000 dollars (2010 dollars) per person more than any other country, and the life expectancy has not increased at a higher rate than other countries that managed to spend much less money per person.

Some countries, such as Portugal and Turkey, have seen sharp increases in life expectancies with smaller increases in health expenditures. These countries seem to be getting more bang for their buck when it comes to health care spending.

Life expectancy is not the only metric to judge quality of health care, so let’s consider other factors. The other two factors we have access to in this data are infant mortality and maternal mortality. Obviously, a key goal of any health care system is to keep these rates as low as possible. To rate the overall quality of health for each country, I created a health score. The calculation for the health score is below.

I did not get this health score calculation from any source. I determined this on my own. If we look at just the G20 countries from 1990-2015, we can see how each country is performing. As you can see, most countries have an improving health score over this 25-year period. I have highlighted three countries: India, Japan and the United States.

I decided to evaluate what health care should cost based on outcomes. I wanted to look only at the G20 countries from 1990-2015, so I made a subset of the data for making the model. I excluded the US from the model building process since it was such an outlier on cost. I ran a Fit Y by X in JMP for the Health Expenditure vs. Health Score. When I looked at the relationship, it appeared that using a natural log transformation for the Health Expenditure would fit the data better than a polynomial.

We could change the question and see what the US should be getting for the cost the country is currently paying for health care (~$8715 per person). We should expect a health score of 990.

From a value-based care model, the US is not getting much value for its dollar.

Although the data and idea for the bubble plot came from Chuck Boiler.

Nice analysis.  Being somewhat cynical, I attribute the delta to lining the pockets of the insurers and healthcare industry, extracting maximal wealth with minimal expense.  Remember, the job of insurers and health care providers in the US is to turn a profit, not necessarily put out a good product.  Hence, over-regulation endorsed and sponsored by the industry in order to preserve the status quo.  In my opinion, baseline good health of it's citizens is not an area to be exploited for profit, otherwise the graph above is the end product.  Just my 2cents worth.

Good to hear from you.  I think your point is a good one.

Our system of health care in the US is definitely unique.  Having for profit companies between health care providers and patients could be part of the reason for the high cost with results that don't match.  Fraud and the US doing a large portion of drug development for the entire world could also be contributing factors.

Why the cost is so high and what to do about it are beyond the scope of this blog.

lee_creighton
Level I
I’m curious how you chose the coefficients in your score. It doesn’t make much difference since it’s a linear transform (and monotonocally increasing), but why not normalize them? Also, did you say that there were other measures in the data set than the ones you used here? If there were several,you could choose based on Principal Components and be more likely of getting meaningful (whatever that means) results.
0 Kudos

Thanks for you comment.  Glad you are reading the blogs.  The 3 metrics I used where the only 3 metrics I had for this data set.  The scaling factor does have some impact here is the graph without any scaling.  I was providing some weight to each factor also I was increasing the spread in the graph so, countries were easier to distinguish.  Again I made these scales up, so happy to change them if there is a good reason. 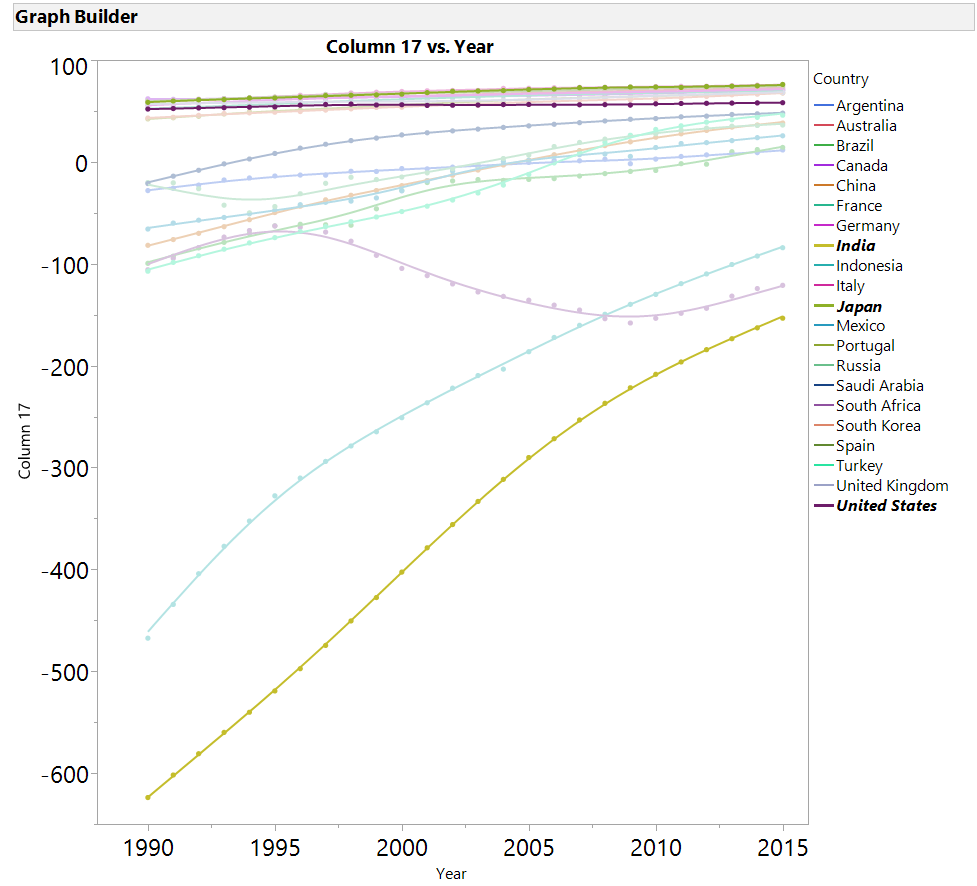