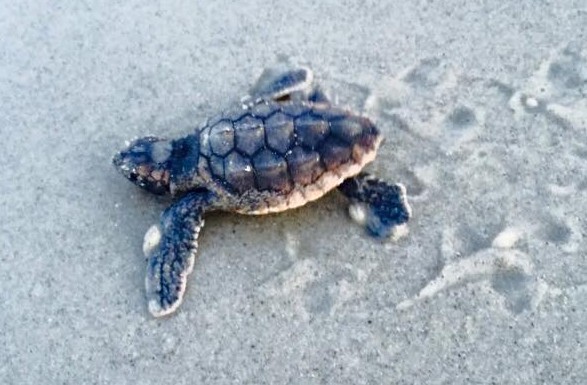 A baby sea turtle that has just hatched

I spend a fair amount of time at the North Carolina coast, specifically at Oak Island. Over the years, I’ve noticed the attention given to saving the sea turtles, but I didn’t get involved with this endeavor until the summer of 2014.

I happened to witness a nest hatching with my mom one evening, and it was amazing to watch all those tiny turtles emerge and march to the water. Did you realize as many as 50-350 hatchlings emerge from one nest? Did you know that only 1 in 1,000 survive?

And so it began for me. I learned more and more  about sea turtles: nesting, hatching, survival rate, types of turtles, etc.. After taking a new job as a JMP software tester, I found out I could use sea turtle data to do my testing. That led to some discoveries in the data and a poster presentation at Discovery Summit 2015 in San Diego in September.

JMP did a wonderful job of reading the data in for me, using the File > Internet Open option in JMP. After that, I was able to pull statistics together with Formula columns, and concatenate tables together for several years. That let me look for  trends over time and make some comparisons. Graph Builder and other platforms, such as Distribution and Fit Y by X, allowed me to find hatching and nesting trends for Oak Island, specifically in areas where there was greater nest density.

For example, here are the summary statistics on all of the nests from the 26 beach programs, showing the hatching success from 2010 to 2015. Hatching success is the number of eggs that actually hatch from a nest. I had 2015 data only through August 15.

As you can see, the mean hatching success is about 78 percent.

Sometimes, a sea turtle emerges from the water to lay her nest, but then for some reason changes her mind and returns to the water. That’s called a false crawl (see below). 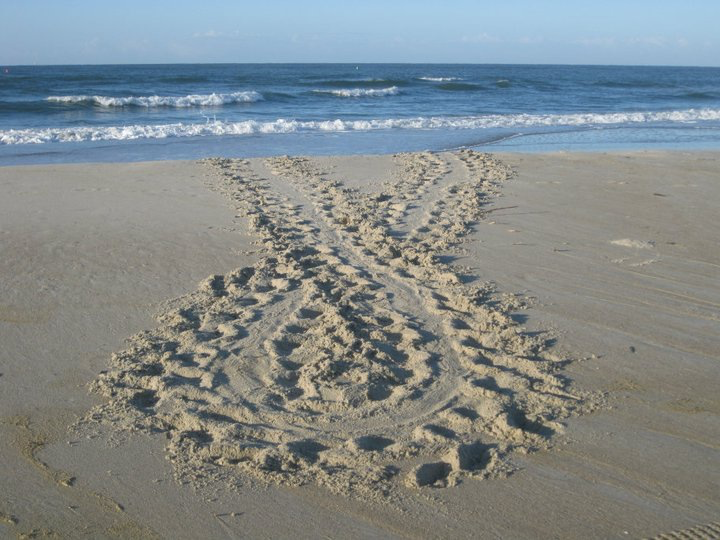 Tracks left behind from a false crawl by a sea turtle.

Using Graph Builder, I saw that nests laid and false crawls are closely correlated in any given year.  This bar graph shows the totals for the years 2010-2015: 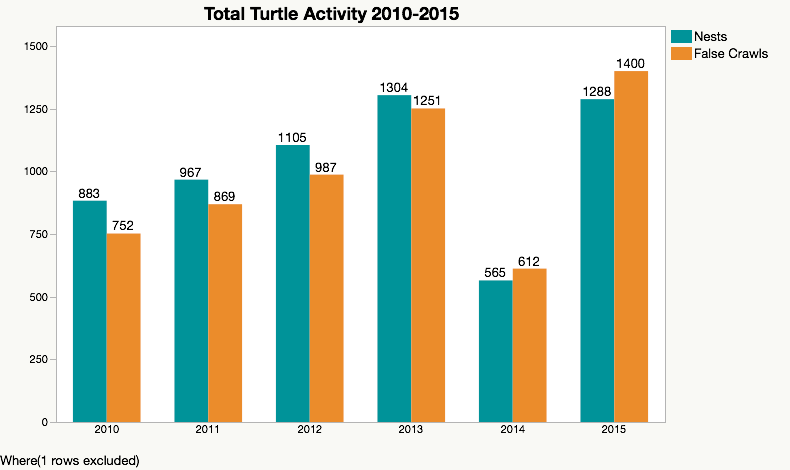 Having the latitude and longitude points of all the nests from 2010 to 2015 enabled me to plot the points with Graph Builder, and then use the Street Map Service in the background to produce this density map: 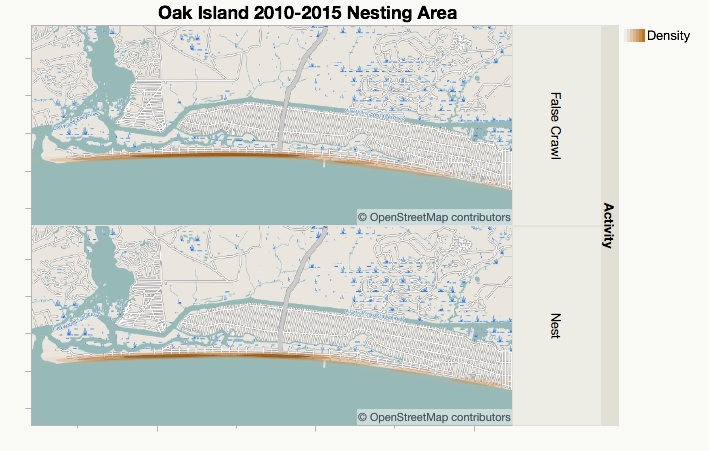 A density map of sea turtle nests at Oak Island

Recently, I shared these findings and visualizations with the NC Wildlife Sea Turtle project leader, who suggested that I share my analysis with volunteers next spring to open the new season. And I will do that, after I complete my analysis for 2015!

Great article Mandy. Love the sea turtle and enjoyed seeing the data and your findings.

Cool stuff, Mandy. You have one of the best jobs possible, mixing your passion with SAS software is pretty amazing!

Very well done Mandy! We can't wait to examine some turtle tracks to see if JMP can discriminate species and perhaps even individuals using FIT - the turtle biologists might then be able to figure who made the false crawls :)

Thank you Robin! It has been a fascinating journey and I've learned so much about these turtles. JMP is a great tool to visualizing this data and I continue to learn more and more about both.

Thanks Michelle! I do love using JMP and applying what I am learning in my testing of the software. Learning about sea turtles and showing that with JMP is a plus too.

Thanks Zoe and Sky! Your help initially this year as I began looking at the sea turtle data was extremely valuable, with understanding terminology and the turtles activity. I look forward to seeing what JMP using FIT can show with the turtle tracks. Discovering whether the same turtle goes to nests in the same place over and over would add another layer of meaning to what I've learned so far. Looking forward to your findings.

Fascinating! Thanks for doing this and for sharing, Mandy.