This script demonstrates a new graphical ANOVA procedure developed by Box and Hunter. This script is for the particular case of a one-way ANOVA with optional blocking. It is especially effective with data from a designed experiment. (A separate script is available for the n-way ANOVA case.)

Simply open a data table, then open and run the script. I will use a simulated experiment from Custom Design. The factor X1 has four levels and there are 6 blocks for a total of 24 runs. 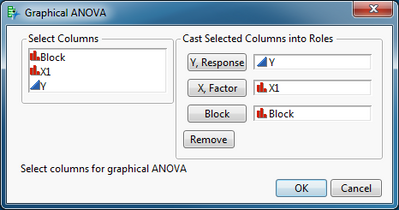 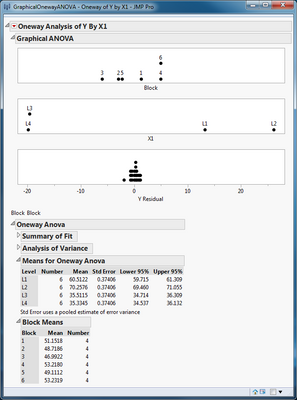 The script inserts the new plots into a Oneway platform. Traditional summary of fit and analysis of variance tables follow a new graphic display. The estimates for the block effects and the treatment effects are plotted along with the residuals. The scaling in these plots allows a direct comparison between the size of the estimate to the residuals.

Jose Ramirez was kind enough to test my script and report an error in the calculation of the scaling.