This script demonstrates a new graphical ANOVA procedure developed by Box and Hunter. This script is for the general case of a N-way ANOVA . It is especially effective with data from a designed experiment. (A separate script is available for the one-way ANOVA case with optional blocking.)

Simply open a data table, then open and run the script. I will use a simulated experiment from Custom Design. The factors X1 and X2 each have three levels and there are 24 runs. 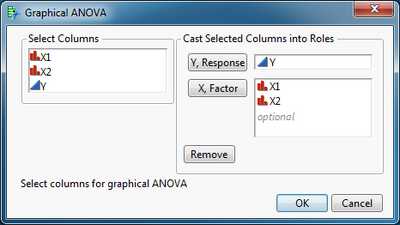 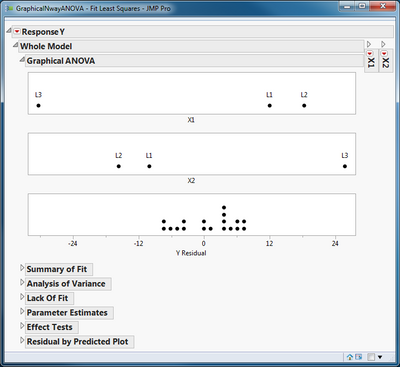 The script inserts the new plots into a Fit Least Squares platform. Traditional summary of fit and analysis of variance tables follow a new graphic display. The estimates for the treatment effects are plotted along with the residuals. The scaling in these plots allows a direct comparison between the size of the estimate to the residuals.

(Note that the significant lack of fit is due to an interaction effect. This effect would require a new column in the data table in order for the script to include it.)