ryan_lekivetz
Staff
The eggciting results of my designed eggsperiment
Aug 25, 2014 10:42 AM

In my previous blog entry, I talked about my frustrations in making good-looking hard-boiled eggs that were easy to peel. My Internet searches found a number of different techniques that cooks said were essential to success, but I wanted to know which techniques were best. So I set up a designed experiment to study the factors that affect the qualities of a hard-boiled egg. Now for the results…

How Do I Analyze This? 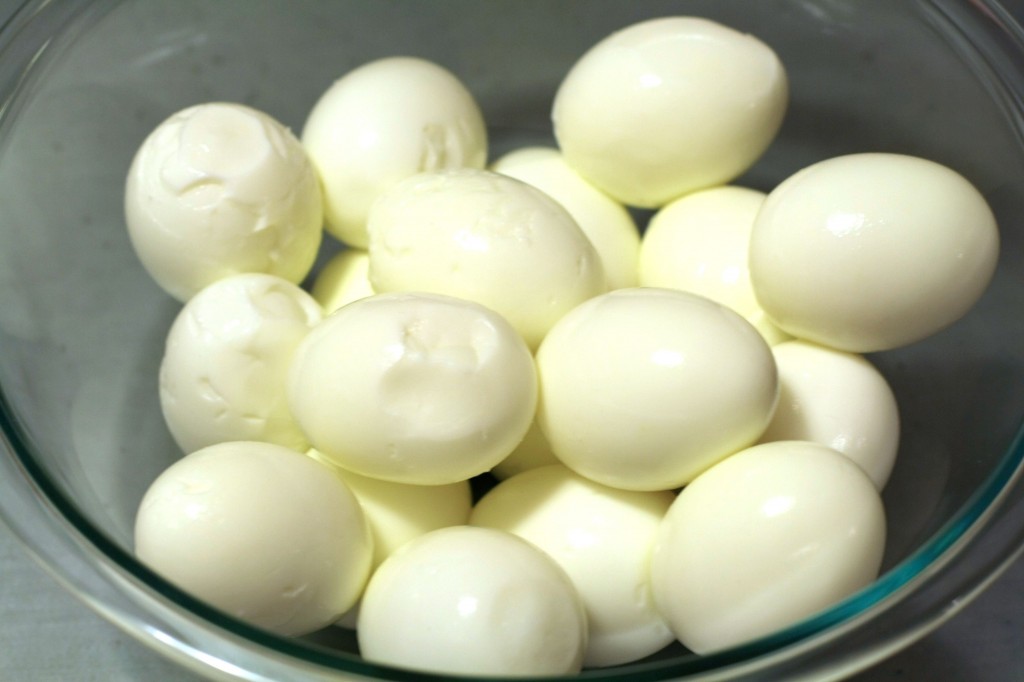 The responses measured were peel time, attractiveness of the egg and ease of peel.  (Photo by Caroll Co)

First off, it’s important to notice that the Custom Designer added a column called Whole Plots (which indicates a batch of eggs that went into a pot) to the data table. We need to include this column as a random effect to ensure appropriate analysis. Fortunately, since we’ve created this design in JMP, you’ll notice a "Model" script on the left-hand side of the data table. Selecting Run Script brings up the Fit Model dialog with the model we had selected in Custom Design, and with the whole plot included properly. Alternatively, you could also go through Analyze -> Fit Model. Before hitting the Run button, I like to change the emphasis to Effect Screening to look at the Profiler.

I must admit, I had reservations about whether or not any effects would show up as significant. The results surprised me.

There was so much variation in the peel times that nothing came out significant at the 0.05 level. However, the effect of the cooking method was quite large, and the lack of significance could be in part due to having only 4 denominator degrees of freedom. The results suggest that starting the eggs in cold water increases the peeling time of the egg.

Or, if you prefer something more graphical, here are the 95% confidence intervals for the estimates. 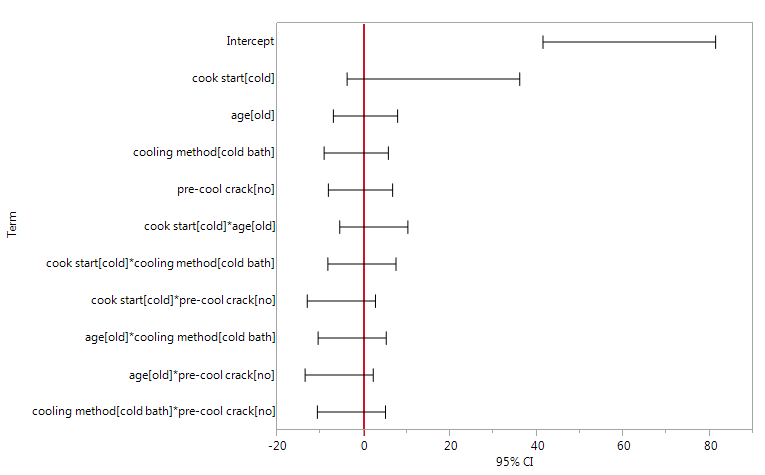 If I ignore the split-plot structure and simply look at the box plots of the peel time for the 12 eggs from each cooking method, the boiling start method looks to be more promising in terms of peel time. Note that I can’t throw away the split-plot structure if I’m doing analysis; I’m using this more as a guide to see if there’s reason for further experimentation – particularly since most instructions for hard-boiled eggs start from cold water. 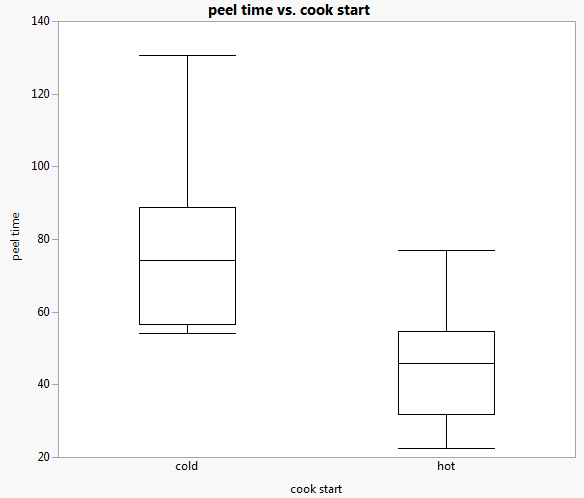 The attractiveness rating provided some interesting results. While there are some statistically significant results here, the largest effect is still the cooking start.

If we open up the Profiler and select “Maximize Desirability,” we find the best predicted settings are a boiling start, an old egg, cold-water bath and no cracking before cooling. This is particularly interesting since the model suggests better results using a cold-water bath instead of an ice-water bath. At the very least, it suggests that I would want to have the cooling method in my next experiment. 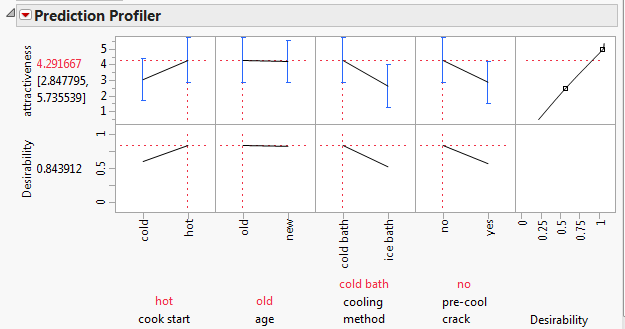 The ease of peeling showed one significant effect. If you’ve read through to this point, you can probably guess which effect it is. When you consider that there were only six whole plots, it’s a bit surprising that I found a difference based on the cooking method.

The bottom line is that the best predicted settings were a boiling start, an old egg, cold-water bath and no cracking before cooling. When thinking about both attractiveness and ease of peel, the results suggest that I still want to study all four factors in the next experiment (with some additions as well).

This experiment has provided me some real food for thought (pun intended). You may have noticed that I had nothing about the taste/quality of the eggs in the response. In part, this was because it was going to be difficult to keep track of, and I didn’t want to cut the eggs right after they were peeled. That said, the eggs that we’ve eaten thus far have been better cooked than any batch I can remember preparing on my own in the last few years.

I also noticed that placing the eggs straight into boiling water led to cracks in some of the eggs (in three out of 12). This didn’t seem to affect the responses, but it is something that I would likely pay better attention to next time.

It certainly looks like there’s more experimenting to be done on this. In the future, I would increase the number of whole plots by using fewer eggs per batch and possibly add another level of randomization so that I can cook multiple batches of eggs at a time in different pots. This would also let me investigate some additional factors.

Thanks to everyone for the fantastic comments thus far, here and in the LinkedIn DOE group. Some of the additional items next time would be adding salt to the water, having cooking/cooling time and temperature as continuous factors (which is made all the more interesting after discovering fascinating material such as this blog post about soft-boiled eggs).

What factors would you like looked at next time? Do you have any other ideas for experiments not involving eggs that you would like to see? Please leave a comment to let me know!

I read somewhere that adding a small amount of baking soda to the water (1/2 tsp) would promote easy peeling. I have no idea if it's true (it's untested by me so far), but it might make an interesting inclusion in your next DOE.

Interesting link - I've seen the baking soda discussion pop up in a few places. It does seem a likely factor for the next experiment, especially if I can add more whole plots. Thanks for commenting!

The experiment looks like a nice case for some intro to DOE. Is it possible to share the dataset? Thanks.

Thanks for the interest! I just submitted the data table to the File Exchange on the JMP Community at https://community.jmp.com/welcome. It should appear as soon as accepted by a moderator.

What I am wondering about: you are interpreting single p-values. It would be statistically more correct if some model selection had been applied - or have I missed that? Then probably also your the p-values of the remaining terms would become "more significant".

Hi Ryan, worth doing this to maybe debunk some myths or even just to find out what the most critical factor is.

To prevent cracking, I always put a tiny hole in the base of the egg (where the gas pocket is) to let gas out. The older the egg, the more gas there is and it's more prone to cracking due to rapid gas expansion.

Very good point - I did just analyze the entire set of effects. I should mention that in JMP 11 we don't have stepwise for Random Effects, which is needed for the proper analysis of the whole plot structure.

The nice thing with this design is that it is close to orthogonal for the main effects and two-factor interactions - so adding and removing effects doesn't change the coefficients very much, if at all. I like keeping the set of effects in this case to give me an idea of the relative importance, but you will indeed see "more significance" if you remove the smaller effects. The exception is the cook start main effect, because it's on the whole plot level.

Very good tip on adding the hole to the base of the egg - I especially like that I can do it on the subplot level, since the whole plot factors are adding up quickly! It will be interesting to see the interaction between age and adding the hole.

My daughter once won a Science Fair for a study of pop corn response to various conditions. The response variable was the number of un-popped kernels (we called these "flop corn"). This was many years ago, but I remember that the DOE worked pretty well.

Great experiment - and I love the label "flop corn." Did you end up changing the way you pop corn after the experiment?

at easter time we usually cook eggs by adding some vinegar to the water. This should prevent eggs from cracking I've learned from my aunt. So another variation in addition to salt in the water which was one of the comments in your previous post.

Also it would be interesting to check if eggs from "happy chicken" (free running, no antibiotica, natural Food) would peel better than those from not so very happy chicken ;)

Nicely done. Can you please tell me how you produced your graph with the 95% CIs and the parameter estimates? I've been struggling to create this exact graph for my data with no success. Thanks in advance!

Hi JP, fantastic question, since it did require a bit of extra work. The short version is that I added the bounds in the table of estimates from Fit Model, turned it into a data table, and plotted it using Graph Builder. Your question has prompted me to write up a blog with more details of how it was created, so many thanks for the comment. Cheers, Ryan

Thanks for the comment! Some more interesting things to think about for next time =)