Sign In
Turn on suggestions
Auto-suggest helps you quickly narrow down your search results by suggesting possible matches as you type.
Showing results for
Show  only  | Search instead for
Did you mean:
Options
Choose Language Hide Translation Bar
0 Kudos

Problem statement: I will often plot a time trend, setting a categorical variable to Overlay role (and often checking several different factors, so first overlaying by column A, then overlay by column B, then column C, etc.) But when there are categories containing many different groups, the plots can get extremely busy (see below,) and it's hard to tell "large N" smoother lines that have a large data set in that group from "small N" lines that are just a spline fit to ~3-5 data points.

Ideally, the data "density" could also be taken into account: if there are only 2 data points from group X in 2015, but 30 data points in 2016 and 100 in 2017, the group X smoother line thickness would be thin in 2015 and thicker in 2017. (Basically the line thickness would be inversely proportional to the time delta between points - but smoothed so the thickness of the line doesn't become infinite if the time delta between two points gets very close to 0.) 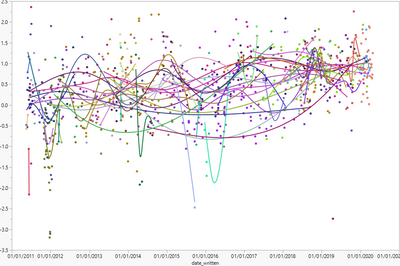 I hope this is clear enough, please let me know if any clarification is needed.