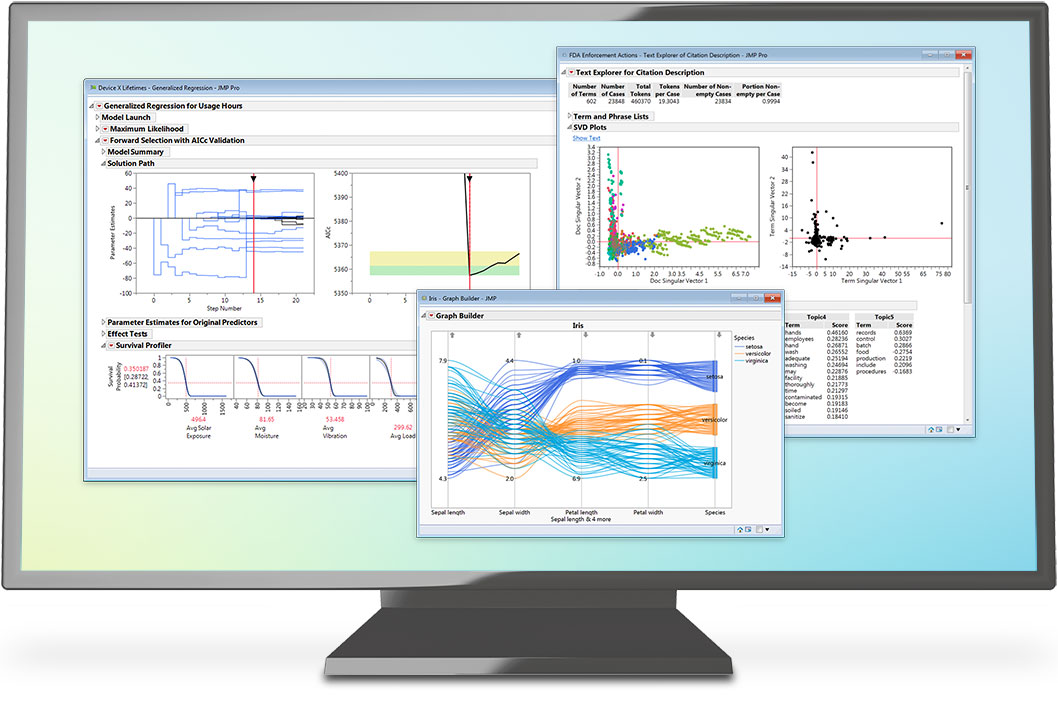 You'll find customer-driven features and enhancements in JMP 13, which will be launched in September at Discovery Summit.

It’s that time again! A new version of JMP will be released soon – next month, in fact, on the day that JMP creator John Sall gives his keynote speech at Discovery Summit.

What’s in this new version? There’s a lot to get excited about. That’s why the JMP Blog is featuring a series of posts based on interviews with the folks who developed the specific features. The series begins today with the big picture of this new release, courtesy of Shannon Conners, JMP R&D Director (who blogs about analyzing fitness and food data), and Dan Valente, JMP Product Manager (who has written about print-ready graphics, among other topics).

“We always try to let customers guide the features,” says Shannon, who manages the software testing and release process.

So, you can expect customer-driven features – brand-new functionality as well as some nice enhancements to existing features, she says.

“JMP 13 is all about making JMP an end-to-end solution for your data access, preparation, visualization, modeling and communication needs,” says Dan.

And as for JMP Pro, the new version helps you organize your models and selectively deploy them – converting JMP models to score code in a variety of standard programming languages.

“Throughout the entire data analysis workflow, JMP 13 reduces the bottlenecks and keeps you in the flow, so you can discover more in your data,” Dan says.

Among Shannon’s favorite new features is Virtual Join, which is helpful for joining up multiple data types. “It’s great because you don’t always want to permanently join data sets,” she says.

Another favorite of Shannon’s is Text Explorer, which lets you analyze unstructured text data. She also loves the enhancements to Treemap in Graph Builder and the addition of Parallel Plot to Graph Builder because they are useful in her own work.

One of Dan’s favorite features is the Dashboard Builder: “With a new set of templates, the ability to easily drag and drop JMP graphs onto a prebuilt grid, add your company logo or headline, and easily access the selection filter functionality in a single click it makes the process of organizing your results into a single window for communication with others much easier.”

Shannon notes that Parallel Plot has been its own platform in JMP for years but will be a lot more apparent to users now as an option in Graph Builder.

“Graph Builder is the platform that gets the most usage by far, according to technical support staff and our early adopters,” she says.

That’s why Parallel Plot and Treemap in Graph Builder have more options than they do in their original platforms. And that’s the direction the software is going: The most flexible version of a graph is in Graph Builder, she says.

If you find that you continue to use the older Treemap and Parallel Plot platforms, Shannon wants to know.

“We’re always interested to hear when and why users turn to these older graphing platforms rather than utilizing Graph Builder,” she says.

She’s also focused on continually improving the quality of JMP. So after you have a chance to try JMP 13, let us know how existing features could be improved. Share your feedback with JMP technical support and in discussions in the JMP User Community. Both Shannon and Dan will be on the lookout for your comments.

In the coming weeks, you’ll hear about Virtual Join, Text Explorer, Parallel Plot, Query Builder and lots more from the very developers who worked on them. Up next in our previews: a post about Graph Builder improvements with developer and data visualization expert Xan Gregg.