That intriguing headline on The New York Times Magazine cover caught my eye as I settled into my seat on the Raleigh-bound flight from Denver last Sunday.

In addition to the hot pink magazine front, what prompted my double take was the coincidence of timing. Just two days earlier, author Jonah Lehrer had addressed the same topic before 300 attendees at the annual Discovery Summit, sponsored by JMP and held last week in Denver. 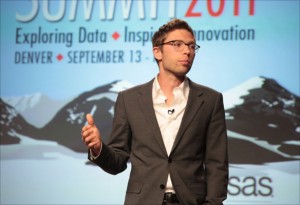 Lehrer, a contributing editor at Wired magazine and author of the books How We Decide and Proust Was a Neuroscientist, quoted some of the same research as Paul Tough, the (appropriately named) reporter who wrote the magazine article.

The premise -- by psychologists Martin Seligman and Christopher Peterson -- is fascinating: Kids who learn how to deal with failure, who can persevere and postpone gratification in pursuit of a goal, are the ones who are most likely to experience success. And oh, by the way, these kids are not necessarily the ones with the best grades or highest IQ scores.

Grit, zest and curiosity are some of the character traits that are important in determining future success, according to this research.

Both Lehrer and the Times article noted that West Point has developed a test to score incoming cadets to predict which ones will successfully navigate the physical, emotional and intellectual rigors of academy life. That test is based on the Grit Scale developed by Angela Duckworth, who studied under Seligman at the University of Pennsylvania.

Finding the Sunday article was gratifying, because from the first Discovery conference four years ago, a primary goal has been to bring attendees together with thought leaders who are engaged in meaningful work involving analytics – and to promote conversations about timely topics in this expansive field of study.

In addition to Lehrer, keynote speakers at this year’s Discovery Summit included:

• John Sall, SAS co-founder and creator of JMP software, who talked about “Speeding Up Exploration.”

• Jeffrey Ma, the card-counting phenom who was the real-life inspiration for the film, 21.

• David Salsburg, a statistical pioneer and author of the book The Lady Tasting Tea: How Statistics Revolutionized Science in the Twentieth Century.

You can see our coverage of the conference and read about the “marshmallow test” that involved 4-year-olds in a study of self-control in this 2009 New Yorker article by Lehrer.