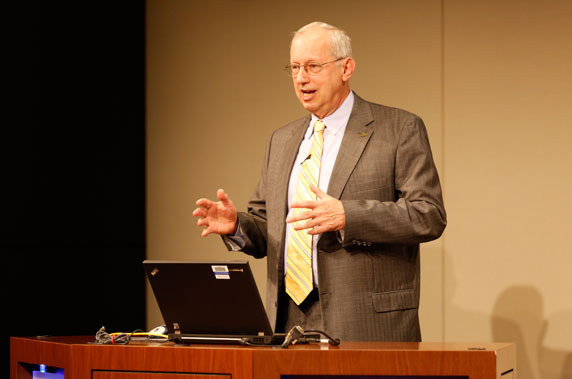 A high point of Discovery Summit is John Sall's tour of the latest version of JMP. At the conference in Brussels in March, Sall will show JMP 12.

I attended my first Discovery Summit conference in 2009. Held at the beautiful Swissôtel in Chicago, it included a keynote speech by Malcolm Gladwell (author of Outliers) and an evening of reminiscing by none other than George E.P. Box!

Gladwell gave a memorable speech in which he discussed, among other topics, the problem of having too much information. When Enron was questioned about its accounting practices, the company overwhelmed us with information – so much so that almost no one could wade through all the data and documents. This is the data challenge all of us face now, Gladwell said.

Everything about that conference was first class – the views from the top-floor reception, the food, the speakers and the participants. I’d been to a lot of conferences (maybe too many), but this was special. Even after three days of talks, I didn’t want the conference to end.

With a bar set that high in 2009, I thought JMP could not possibly host a conference like that again. But I was wrong, and I’ve been wrong five times – the number of Discovery Summits held since then. Here’s why Discovery Summit is always the highlight of my conference year.

The keynote speeches continue to impress. In 2010, Dan Ariely, author of The Upside of Irrationality, told us about how people make seemingly irrational choices; this happens almost by default because we often have too many choices, and some organizations take advantage of this fact. He shared the example of The Economist magazine’s subscription pricing. The magazine offered online subscriptions for $59, print subscriptions for $125, and print and online for $125. Most people selected the print-and-online option. No one (rationally) chose print only. However, when the print-only option was removed, the percentage of people opting for $59 online jumped from 16 to 68 percent, while the percentage of people who chose $125 print-and-online combo dropped from 84 to 32 percent.

In 2013, the San Antonio conference featured Nate Silver, who gave a talk based on his book The Signal and the Noise. I recall he said that sometimes the best answer is “I don’t know,” but it’s hard for experts to say that. This made me think of John Tukey’s Type III error – finding the right answer to the wrong question.

One of the best parts of Discovery Summit is the opportunity to network and exchange ideas with an amazing collection of thought leaders, researchers and authors. That’s what I want when I commit to spending three days away from home, and no other conference so consistently delivers it.

I’ve made new friends, reconnected with old friends and gotten ideas for new projects from every Summit I’ve attended.

The very people who create JMP give presentations at the conference and host “Meet the Developers” sessions – where you can ask your specific JMP questions, tell what new features you’d like to see in the software and watch a live demo to learn something totally new. The chance to see the latest wizardry from the JMP developers is worth the price of admission by itself. Watching John Sall analyze entire data sets seemingly without effort and seeing what’s new in the latest version of JMP are always high points as well.

All in all, it’s a conference that’s hard to beat for anyone who explores, analyzes or models data.

I’m happy to say I will be a keynote speaker at Discovery Summit Europe in March. I’ll be reporting on my work studying the performance of aging athletes in running and swimming. Did you know that the record marathon time for the age 90+ group is 5 hours 40 minutes (!?) or that the 100 m record time for those 100 and older is 23.14 sec?

Because of the increased participation of older athletes, we now have a much better sense of how masters’ athletes compare to their 35-year-old counterparts. Would you guess that older athletes fare relatively better in sprints or long-distance events? Men or women? To find out, book your flight to Brussels and join me for the first Discovery Summit Europe!