Consumers Union publishes a report called “Fuel economy vs. performance” in which the organization provides a table of data to “prove” that “You don't always have to give up engine performance in return for good fuel economy.” 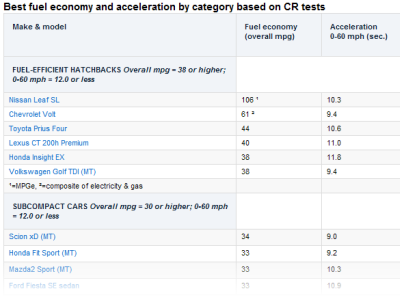 While I greatly appreciate having the raw data, a graphic visualization would go a long way to support this claim. Why not see for ourselves in JMP?

Thanks to JMP’s Internet Open command, it’s easy to get the table into JMP. After a little clean-up to remove the footnotes and add a classification column, I have a nice data table to work with. Now we can view acceleration versus fuel economy in Graph Builder. 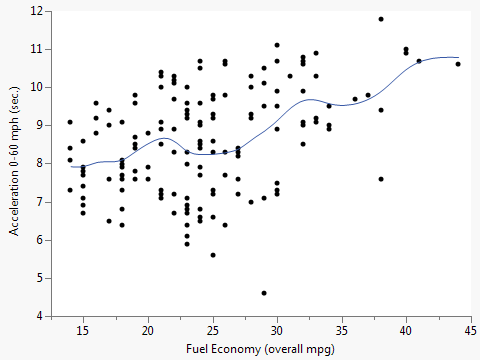 I’ve removed the Nissan Leaf and Chevy Volt since they’re extreme outliers and don’t have the same MPG meaning. Acceleration is in seconds, so lower is better. The basic trend the smoother shows is that acceleration gets worse as fuel economy gets better – not exactly what the original report was going for.

Maybe Consumers Union meant there’s no acceleration penalty within category, treated independently. For that, I’ll add Category as an overlay variable. I’ll also use a regression line element, which is new for JMP 10, instead of the smoother to get a more statistical sense of each trend. 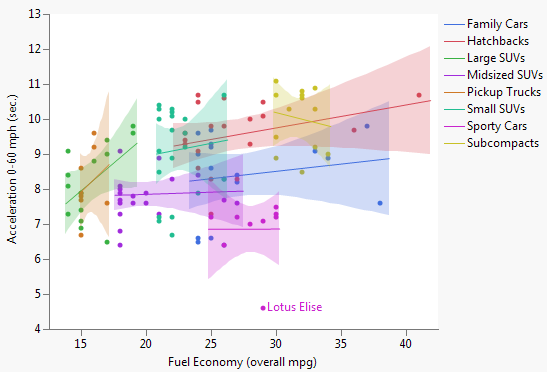 With regression lines, Graph Builder shows the 95% confidence intervals by default, which gives you a sense of the quality of the fit. Under the normal assumptions for linear regression, the “true” best fit line falls within the shaded region 95% of the time. All of the intervals are wide enough to contain lines of positive, zero or negative slopes -- so we can’t “prove” any strong statistical conclusions, but we can still see some interesting trends.

Before reading too much into the summary visualization, note that the Consumers Union data contains only cars that performed well in their tests and to reduce visual complexity the graph only shows eight of the 12 car categories.

Another way of comparing groups is with a small multiples style of data visualization. If I move the Category variable from the Overlay role to the Wrap role, we can see all 12 categories without the complexity of overlapping elements or running out of unique colors. 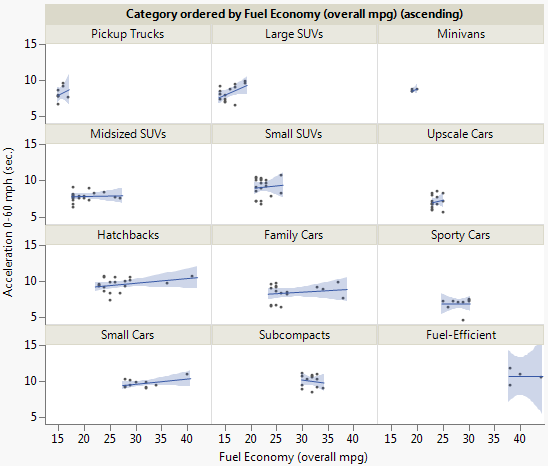 I’ve also added Fuel Economy as an ordering variable for the Wrap group so the panels are ordered by average fuel economy. How do you set the ordering variable? Drop it into the zone just below the group label area.

Which graph tells the story better, the overlay or the small multiples?

Good point, SB. It wouldn't surprise me if there were also a more linear measure for performance that acceleration. I tried using GPM, and the result is largely the same with the SUV/Truck lines being a little less steep.