In my previous post, I talked about the fundamental quantities that affect the ability of a designed experiment to detect non-negligible effects of the factors. These are:

3)      The significance level of the hypothesis test

Why did you make a change?

It is always a bit risky to change the interface of an existing feature of software, so we did it with some trepidation. However, as you will see, the new interface offers more capability and clarity (we hope).

Figure 1 shows the JMP 9 and JMP 10 interfaces side by side. The design being evaluated is an orthogonal two-level design with six factors and 12 runs.

The first thing you might notice is that the name of the outline node has changed from Relative Variance of Coefficients to Power Analysis. Since many practitioners must demonstrate that a proposed design has adequate power before proceeding, having Power Analysis easily visible seemed like a good idea.

Note that the reported power for all the factors is the same in both versions but the Signal to Noise Ratio is 1 in JMP 9 and 2 in JMP 10.

What’s up with that?

What about the other differences?

There is an extra edit box for the Error Degrees of Freedom in JMP 10. By default, this value is the difference between the number of runs and the number of parameters. There is one exception to this rule and that is when the number of runs is equal to the number of parameters. In that case, there are actually no error degrees of freedom, and technically you cannot test the effect of any factor so the power would be undefined. In this case, we “invent” one degree of freedom, so that we can provide some meaningful (albeit generally depressingly low) value for power.

What is the utility of the Error Degrees of Freedom edit box? Isn’t changing that number cheating?

It is not cheating unless you increase the number of error degrees of freedom without subsequently increasing the number of runs in the design to match!

There are two uses for allowing control of the Error Degrees of Freedom.

First, by increasing the error degrees of freedom, you can get a quick and dirty assessment of how the power will increase if you add runs to your design. And you can find this out without generating a new design.

Second, you can use the error degrees of freedom to get a more accurate picture of the power for detecting the effect of a whole plot factor in a split-plot experiment. This is something that required JSL scripting in JMP 9.

How does that work?

Consider a scenario with two factors that are hard to change from one run to another. Suppose you have six factors in all. You decide to do 16 runs in groups of two where the hard to change factors stay the same in each group. Figure 2 shows the Custom Design setup. 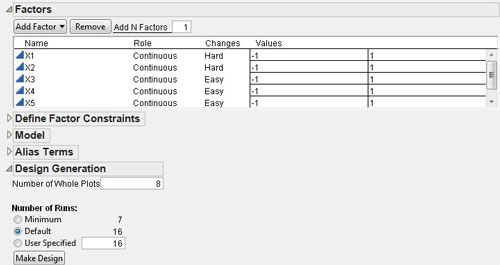 If you click the Make Design button, you get an orthogonal split-plot design. Before looking at the Power Analysis section, I recommend going to the red triangle menu and choosing Simulate Responses. Then click the Make Table button. Finally, run the Model script in the top left panel of the resulting table.

Figure 3 shows the Parameter Estimates from the fake data I generated. The parameter estimates are not important. I want to draw your attention to the column of the table labeled DF Den. 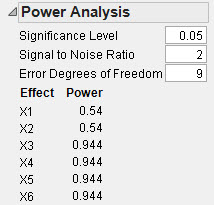 So, the power for detecting whole plot effects in this design is 0.463 – see the top two numbers on the left panel of Figure 5. The power for detecting subplot effects is 0.843 – see the bottom four numbers on the right panel of Figure 5. This analysis assumes that the whole plot variance and the error variance are the same (a standard assumption).

Why couldn’t JMP do all this?

Unless the design is orthogonal, the degrees of freedom shown in the REML analysis depend on the observed responses. So, in general, it is not easy to fill in these values in advance. Stay tuned for further improvements in JMP 11.

Are there other differences?

The Power Analysis has a number of hidden columns. Figure 6 shows the complete table for the first example. You add these columns to the display by right-clicking inside the table. 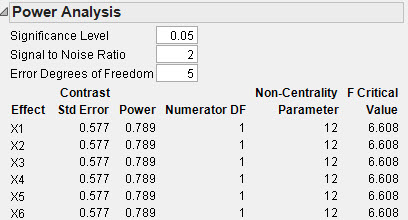 The extra columns provide information that would allow you to do these calculations by hand using a JSL script.

So far I have only talked about factors with two levels. With more than two levels, the situation is more complicated. That will be the subject of a future post.

So, for clarification, are these two interpretations correct?

I'm not sure I said what I wanted to above. I think this words the statements better.

In JMP 10: Power is the probability of finding a significant model parameter if the change in the mean response across levels of a factor (the effect size) is X*Error Standard Deviation, or the regression coefficient is .5*X*Error Standard Deviation, where X is the Signal to Noise Ratio. (Essentially, here, the Signal to Noise Ratio is double what it was in JMP 9.)

In SAS/Jmp 10 custom DOE power analysis function, if we had factor that had 3 levels, would the signal to noise ratio change to "3" instead of 2 if I am interpreting your article correctly?