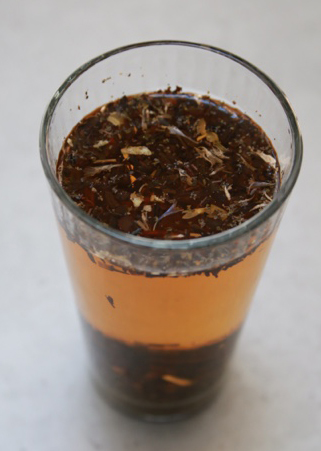 In my previous post, I described an experiment that my wife and I conducted to find a method for making delicious iced tea with juice. The factors we looked at were these:

So, were we able to make some great-tasting iced tea? Fortunately, yes.

However, in doing the analysis, I realized that I should have been more careful in setting up the design. For those who don’t care to read all the details below, I'll tell you what our experiment suggested worked best: Half apple juice with oolong tea was the best combination, with the cold steep method potentially being better.

While the kitchen did become a bit cluttered, we were able to complete the experiment. I randomized the numbers on the cups so my wife couldn’t easily associate batches of tea, and using the measuring tape for the response was effective.

If you recall the design setup, I only specified a main effects model to the Custom Designer. Looking at the color map on correlations, the design is orthogonal for the main effects, so I can estimate them independently… but I have some full aliasing between main effects in the whole plot and two-factor interactions from the whole plot.

The one that concerned me the most is tea type being confounded with steep method * steep time. The steep time is really just a placeholder that depends on the method, so in hindsight I would have included this interaction in the model – I guess that’s what follow-up experimentation is for, although I didn’t have that luxury this time. 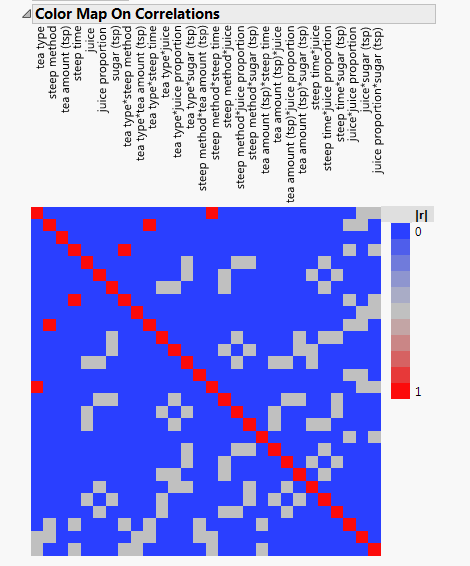 Fitting the main effects model, I see that apple juice and using more of it show up as significant. I also noticed that oolong tea and cold steeping have larger effects.

After doing some model exploration, I see that a much simpler model comes from using tea, juice and juice proportion: 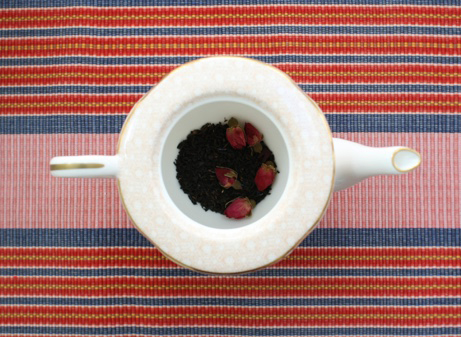 I would have been more careful with the design if we had had more time. But we still got useful results.

If I wasn't pressed for time, I would have been more careful with the design that we ran, either by adjusting the number of whole plots or ensuring the confounding happened between two-factor interactions. However, it was still better than no experiment at all, since we had no idea whether we would even be able to come up with an iced tea to consider serving, so the results were pleasantly surprising.

We did cold steep oolong tea overnight and then used the 50% apple juice proportion. Based on the results, we also used less tea and sugar than we might have otherwise, since they didn’t have a large effect. We went through 2 gallons for 10 people, with other drink options (including apple juice all by itself), so it must not have tasted all that bad.

Any future kitchen experiments you would like to see? Leave a comment below and let me know. Thanks for reading!

Interactions in general are what makes food taste such a messy but wonderful world.

Think of all the "taste experts" and "gourmet gurus", some that work for big packaged food makers, some that judge restaurants or good vs bad wine years.

That brings up a "gage study" on the human factors as an idea for further study perhaps or just . Machine studies are nice and clean, but human factors are really messy...like economic forecasts or even economic models in EDA studies. If you add neighbors instead of just your tea-loving wife to the measurement system, what happens? That might give you the "commercial" view and you can sell the brand that results??

The big data guru's that win on human-factor issues seem to be the ones that combine results of many other workers to get consensus of predictions, like Nate Silver on baseball and elections.

Some very interesting ideas, thanks. I've been thinking of ways to get some of the JMP team involved, particularly with such subjective responses. Hopefully I'll get a chance to explore more of this if I can find the time (and resources)!

Fun article Ryan! I really enjoyed reading both these posts. The first thing that comes to mind is baking (yeast, sugar, flour, ...)- and you could have some really great response factors - hardness, height, bounce back, overall liking....

While it does require a different design, multidimensional scaling has a history with these sorts of questions and can provide additional insights when trying to understand the basis of preference.