Elections are a beloved but controversial topic worldwide. Feelings are often strong, debates intensify on a daily basis, and positions become polarized. Elections for presidents or parliaments get a lot of attention from both news media and citizens. But I believe local elections can be fascinating as well. That’s why I invite you to take a deeper look into the current elections for a new mayor in Munich, Germany.

Munich was voted the world’s most livable city in 2007 and 2010. Munich is the green city of the Oktoberfest, of beer, of Bavarian veal sausage and of coziness! So what? you might say.

It’s the end of an era: Munich’s mayor for the past 20 years has been the social democrat Christian Ude, who was not allowed to run for office again because of his age. Twelve (!) politicians were hoping they would win the opportunity to replace Ude on March 16. But nobody won a majority of the votes. On March 30, we will have have a historic vote: the first run-off election in 36 years.

But which parties have already had the opportunity to lead Bavaria’s main city for a six-year term as mayor? The graph below shows you the winners since 1952. 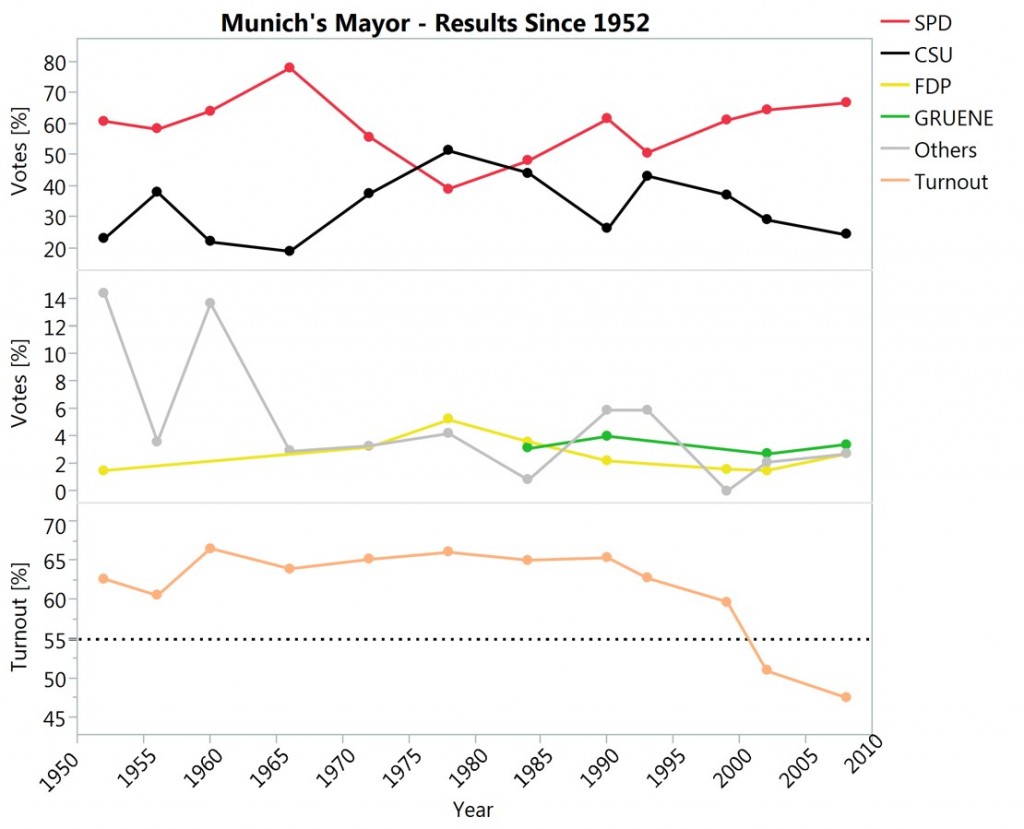 Let’s take a trip down memory lane with Figure 1: Just twice in post-war history has Munich gone “black,” the color of the conservative party CSU (Christian Social Union). Right after the war, Karl Scharnagl of the CSU was installed by the American occupying power as mayor in 1947. Then in 1948, the city council voted for the “red” Thomas Wimmer of SPD (Social Democratic Party) as the new mayor. Since then, the “red” party has led Munich almost continuously. Only once, in 1978, did Erich Kiesel of the CSU benefit from a candidate’s change of SPD party and win in a run-off election. But this lasted for only one legislative period.

The era of Christian Ude started in 1993, and he managed to gain more and more votes over the years despite decreasing turnout. In 2008, he won 66 percent of the vote. Since then, some things have changed. The “black” party has regained some strength in both Germany’s and Bavaria’s elections. Although Munich's citizens still voted for Ude, they became increasingly dissatisfied. Munich has been growing, causing more housing, traffic, child care and education problems. Now 36 years after the last CSU mayor in Munich, that party has a chance to win again.

There were two TV debates before the election on March 16, in which the four main candidates participated: Dieter Reiter (SPD), Josef Schmid (CSU), Sabine Nallinger (Alliance '90/The Greens (GRUENE)) and Michael Mattar (FDP, Free Democratic Party). (Eight other parties also sent their candidates, although they have very little chance of winning the election.) All candidates said they would make it a high priority to work on the issues of growth, housing, traffic, child care and education. So their messages were very similar. Everyone felt it was a time for a change and that Rieter was unlikely to repeat Ude’s results.

And if we look at historic data, which party other than the CSU would have any chance of winning at all? The graph below illustrates the answer to this. 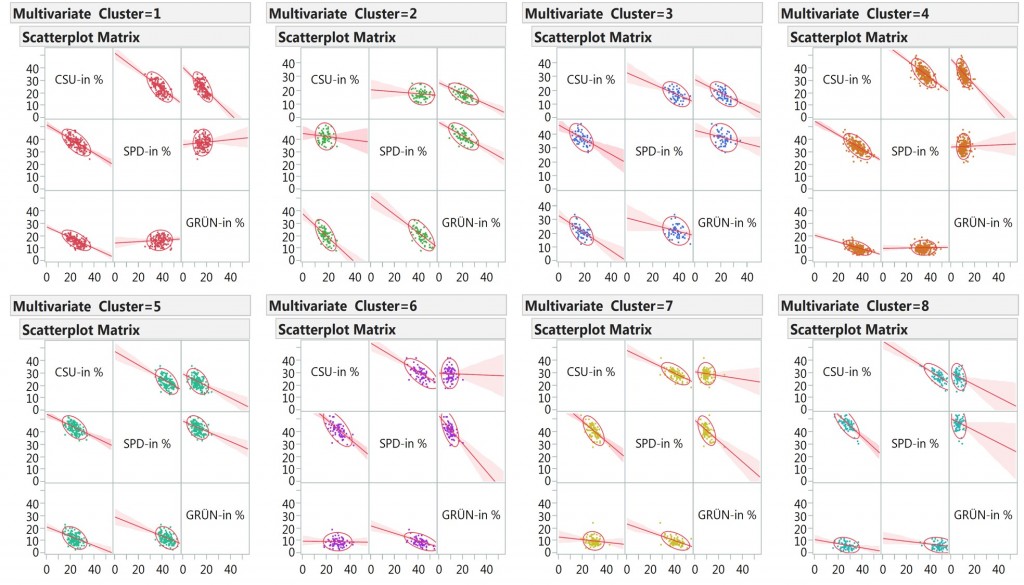 It is difficult to predict the outcome when clustering the districts based on their voting behavior and visualizing the relationships between the parties in a multivariate analysis (see Figure 2). The graph shows that most districts voted for either SPD or CSU, although in the districts in Cluster 2, GRUENE were neck-and-neck with CSU. Supposing that many people from GRUENE voted for UDE to prevent a CSU victory, the “Losing UDE” effect might be a game-changer for Nallinger and GRUENE in other districts also.

The here and now

On March 16, 2014, Munich voted, and for the parties, the results were shocking as well as exciting -- especially since the turnout was even lower than in 2008: about 42 percent. Reiter saw a 26 percent drop-off compared to Ude’s result in 2008, ending with 40.4 percent. It was expected that he would lose votes, but it was surprising how much he lost. Schmid received 36.7 percent, a 12.3 percent increase compared to his 2008 result. Because the mayor has to have an absolute majority, Munich must go to the polls again at the end of March for a run-off election between Reiter and Schmid.

Although Nallinger is not a real competitor, it would be grossly negligent not to note Nallinger's valiant fight that achieved 14.7 percent of the vote. This is a much bigger surprise than the neck-and-neck race between Reiter and Schmid. If you take a deeper look into the city districts (Figure 3), you can see a much more differentiated scenario than in 2008, where SPD was almost always on top. In 2014, there are many more districts where CSU is ahead of or in the same range as SPD (clusters 3, 4, 5, 7, 8 and 9), although some districts are without doubt still led by SPD (clusters 1, 2 and 6). However, many more districts are also a close race between CSU and GRUENE for second place (clusters 1 and 2).

Looking at the overall win-loss results, you can see that GRUENE won over many citizens, especially non-voters, as did CSU. In contrast, SPD couldn’t replicate their 2008 results in 2014 and lost support, both to non-voters and their competitors CSU and GRUENE (Figure 4). Out of 150,000 lost SPD voters, almost 96,000 didn’t vote at all.

Nallinger’s mayoral race enriched her result as well as her party’s result for the city council. The Greens achieved more than 15 percent (+2.3 percent). However, the big surprise is that the biggest party has changed from SPD (31.4 percent, minus 8.3 percent) to CSU (35.2 percent, plus 7.5 percent). Now it’s clear that the Ude advantage is gone.

On March 30, the new mayor will finally be selected in a run-off election. Dieter Reiter is less than 6 percent ahead of Josef Schmid. Of course, the Conservatives are hoping their results will give them the win. I’m skeptical. Based on historic political closeness and alliance, the SPD probably can count on the supporters of GRUENE. Nallinger’s result of almost 15 percent of the vote, if added to Reiter's, could create a majority.

At the same time, taking into account that there is no true majority anymore in the city council for SPD and Alliance '90/The Greens, it may be challenging for a “red” mayor (in case he makes it). He would have to take care of all Munich citizens, including many of those who didn't vote for him. In any case, there will not be another era like Ude’s for SPD.

Your graphs on election results and party makeup was great, fits right into further root-cause analysis underway in Europe, as will in US after upcoming mid-term elections. Nate Silver will have a ball in 2016. Thanks for the great visualizations.

Mike, thank you for your comments, especially on the graphs! The article in NYT brought up Gauweiler, who is one of some very populistic politicians. At the same time the huge majority do not share his opinion about secession. However the article is a nice read and captures some true Points back in 2012, some could be easily overestimated.

Munich stays "red". Yesterday, on a sunny Sunday, with only close to 40% turnout, Dieter Reiter (SPD) won the election to Munich's new Mayor with 56,7% (preliminary official result) over Josef Schmid (CSU, 43,3%). In 4 districts the narrow "black" majority was toppled. The huge majority of electors for GRUENE now voted for SPD (42600 vs. 1300 for CSU). However, also 23100 previously voted for GRUENE on March 16 didn't vote again on March 30. If that's not informative ;)