There were probably more state and national polls of the 2012 election for President of the United States than ever before. Despite this, many pundits were shocked by the election result. Most national polls showed the two candidates' expected vote percentages within each other's margin of error. As result, many commentators viewed the presidential election "too close to call."

The state-by-state polls told a very different story. Romney had uncontestable leads in 23 states, for 191 electoral votes. Similarly, Obama had 17 states solidly in his column, for a total of 212 electoral votes.

The key to the election was how the candidates would divide the electoral votes of the remaining 10 states. These states -- Colorado, Florida, Iowa, Nevada, New Hampshire, North Carolina, Ohio, Pennsylvania, Virginia and Wisconsin -- in many cases were polled multiple times per day by different organizations in the week leading up to the election.

There was substantial variation across the polls within each state. In almost all the states, there was at least one poll showing Obama in the lead and another showing Romney in the lead. By "cherry picking" the poll that favored a particular candidate, one could persuade oneself that one's favored candidate would win. Another interpretation, held by many pundits, was that the race was too close to call.

Neither of the above approaches makes use of current statistical thinking, which advocates averaging poll results to get a more precise estimate of the true percentage of the voting population favoring a particular candidate. A single poll has uncertainty due to two things:

By using poll averaging, Nate Silver of the FiveThirtyEight blog at The New York Times managed to correctly predict all 10 so-called "battleground states." Of the 10 battleground states, only North Carolina went to Romney as predicted by Silver. One could argue that Silver called Florida a toss-up, but in his final map, Silver colored Florida a light blue (indicating a slight preference for Obama) rather than yellow, which would have indicated a toss-up.

I was interested it Monte Carlo simulations of the election using the poll-averaged probabilities in each state. Both Silver and Sam Wang at Princeton University produced graphs of such simulations. Here is Wang's graph at the Princeton Election Consortium website. 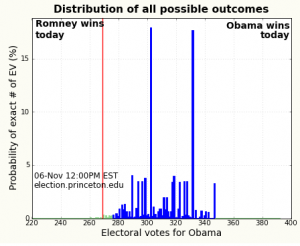 A qualitatively similar plot appears in Silver's blog referenced above and shown below. 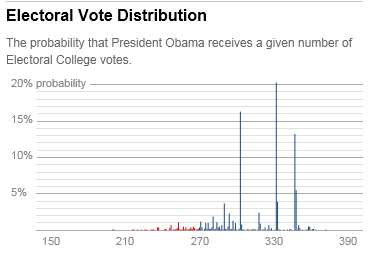 I wrote a script in JMP to reproduce this graph. An image of the script appears below. 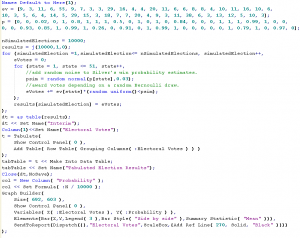 The script generates the plot below using the Graph Builder in JMP. 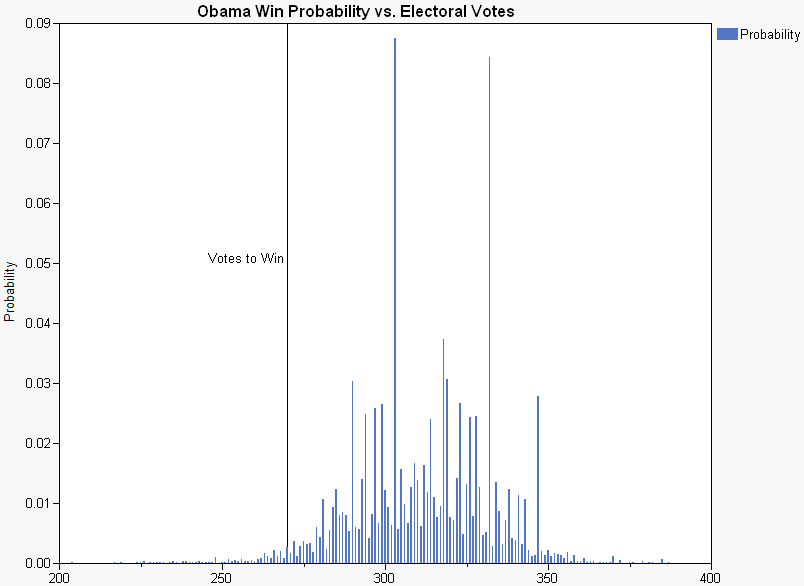 Note that while the three graphs exhibit qualitative similarities, the y-axis values are different. This is due to different assumptions being made about how to model the uncertainty in the probability estimate for each state.

The actual electoral vote count for Obama was 332, which corresponds to the second highest line in my plot at a probability of 13-plus percent. The highest line (nearly 14 percent probability) at 303 electoral votes included all the same states except for Florida, which has 29 electoral votes. Note the line at 347. That would have been the result had my home state of North Carolina also voted for Obama.

The number of simulated results below the black vertical reference line at 270 is very small. This suggests that the election was not all that close and certainly not too close to call.

Are there any forecasters in the corporate media who discuss systemic election fraud and include a True Vote analysis in their models? I have not seen any. The pundits ignore election fraud completely by limiting their projections to the recorded vote. But they are missing the big story which can be expressed by the simple formula:

The forecast: Obama has 320.7 expected electoral votes (see the definition of the expected value below) and a 332 snapshot EV. His 99.4% win probability is based on 497 electoral vote wins out of 500 trial simulations. His projected popular vote share margin is 51-48%, a 69-65 million vote margin.

If FL, OH and NC are stolen, Obama will likely lose. Even though he won the True Vote, it was not enough to overcome the FRAUD FACTOR.

To the pundits, the Fraud Factor is zero. They are not paid to project the True Vote. Their projections are based on Likely Voter polls which are always close to the popular recorded vote. The public has always been led to believe that the recorded vote was in fact the True Vote. It never is. The historical uncounted votes which are 70-80% Democratic prove it. And there have been approximately 40-45 million uncounted ballots in the last six presidential elections â according to the U.S. Census. Thatâ s the bad news.

The good news is that finally, after 12 long years, there is a near critical mass of election fraud awareness. The 2000 and the 2004 elections have been proven to be stolen. Of course, the media pundits know this. But they like their jobs too much to defy their editors.

But the word is finally getting out after decades of media silence and misinformation. Yes, itâ s a conspiracy, all right - a conspiracy fact, not a theory. The simple fact is that the conspiracy is the media and politicians who have kept the facts about our broken electoral system hidden from the public. What is the proof? The proof isâ ¦they never talk about the millions of uncounted votes or the proprietary voting machines owned and serviced by right-wing organizations â who just so happen to also count the votes..