Last week, I wrote about the Custom Design user interface for power calculations that is new for JMP 11. My goal for this week’s blog post is to explain how to interpret the new power analysis for the two-level screening designs including screening with hard-to-change factors.

What is so different about screening designs?

The analysis of screening experiments is often presented in terms of the effects of the factors – namely main effects and interaction effects. The analysis of regression models yields parameter estimates. Though the two different analytical approaches give the same predicted responses for orthogonal designs, factor effects are not the same as parameter estimates. So, it is important to define our terms.

According to Montgomery (2013), the “effect of a factor is defined to be the change in the response produced by a change in the level of the factor.” Figure 1 shows the data for a specific example (Montgomery, pages 184–186) showing the factor effects and the regression model. 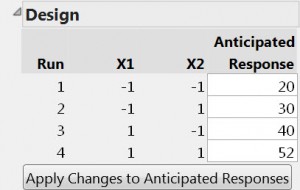 As Montgomery points out, another way of looking at this data is the regression model representation: y = β0 + β1x1  + β2x2 + ε

The estimates of β1 and β2 are one-half the value of their corresponding main effects. This is because the main effect is the difference in the response going from a scaled X-value of -1 to a scaled X-value of +1. That is a change of two units. The coefficients  β1 and β2, however, are interpreted as slopes (i.e. the change in the response due to a one unit change in the factor). For the data in Figure 1, the equation for the predicted responses is: y = 35.5 + 10.5x1  + 5.5x2. JMP uses the regression model representation, as you can see by examining Figure 2. 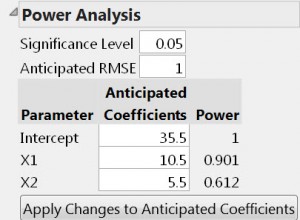 Note that the power for detecting a regression coefficient as large as 10.5 is 0.901. That is the same as the power for detecting a main effect of 21. Some implementations of power calculations define the power in terms of effects rather than regression parameters (or coefficients). To match JMP’s results with these implementations, you would need to multiply the Anticipated Coefficients values by two.

Why doesn’t JMP use factor effects instead of regression coefficients?

First, it is somewhat unclear how to define a factor’s effect (signal) when the factor has more than two levels. Once you define a coding convention for multilevel factors, the regression coefficients are uniquely defined. This was covered in my previous blog post.

Second, calculating effects by the difference in the averages of responses at the high and low levels of the factors works well for designs that are orthogonal. While textbook screening designs are orthogonal, data that arise in practice are often nonorthogonal due to the loss of a run, partial replication or a number of runs (discounting center runs) that is not a multiple of four. When, the data are nonorthogonal, calculating effects as a difference in averages does not provide the best estimates. Fitting a regression model by least squares is preferable. The regression approach is more general.

What about power calculations for split-plot experiments?

When certain factors are hard to change from one run to the next, it is desirable to run experiments where such factors stay constant for an entire group of runs. Experiments with this structure are called split-plot experiments.

How about an example for clarification? 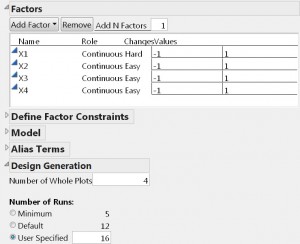 The power analysis shown in Figure 4 illustrates the fact that the power for a hard-to-change factor is generally substantially lower than the power for the other factors. 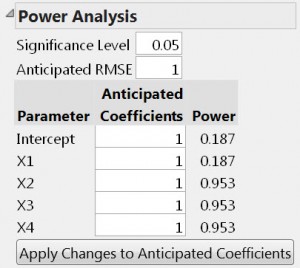 How come the coefficient for X1 has such low power when it is the same size as the other coefficients?

Note that the variance of the X1 effect depends on the ratio of the two variances above. By default, that ratio is 1. Also note, that the Custom Design tool now keeps track of the error degrees of freedom for every effect. So, it is no longer necessary to supply an edit box for this quantity as it was in JMP 10.

Where did the Signal to Noise Ratio go?

The work on power calculations is not finished with the implementation in JMP 11. There are two enhancements I see coming in future releases.

First, some experiments do not have continuous responses with random normal variability. Another possible response for a run is one of two alternatives – success or failure. In such cases, the power of an effect of a given size is necessarily lower because a 0/1 response contains less information than a continuous response. Providing power calculations for these binary responses would be desirable.

Second, the current implementation requires you to generate multiple designs with differing numbers of runs to ascertain the relationship between power and sample size for a particular set of requirements. Providing an automated mechanism for generating power versus sample size curves would be useful, too.

You indicated future patch or later release that would provide "an automated mechanism for generating power versus sample size curves would be useful" and that sounds great for engineers like us who are not statisticians. And thanks for the carefully worded and useful blog tutorials. Hoping to test out JMP 11 soon.

How is the power calculated for the effect of a categorical factor with greater than 2 levels in an unbalanced design? I have found documentation supporting calculating the individual contrasts but not the "effect."

The effect of a categorical factor with more than two levels will have more than one degree of freedom. More specifically, a categorical factor with k levels has k-1 degrees of freedom for its main effect. Using the values of the anticipated coefficients you can compute the expected model mean square. Given the RMSE and the number of degrees of freedom for error, you can compute the critical value for an F-test for the group of coefficients. The power is then the probability that the model mean square is larger than this critical value. This is computed using a noncentral F-distribution.