For those of you who haven’t tired of election results (can the three of you please gather around this blog post?), I came upon voting data by state from the inception of the Republican Party (1850s) to today.  I thought I’d first take a look and see how each state has voted in the past. 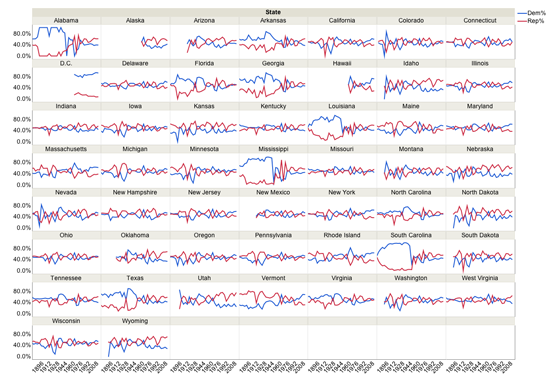 The first thing that caught my eye was how many states, mostly in the South, had wide gaps between Democrats and Republicans, all favoring the Democratic Party until the 1940s (around WWII). Then the gap in those, and all states, tightened between the two parties.

I then wondered if today’s battleground states have always been battles. What did their history look like? I first filtered to show just those states on the trellis chart: 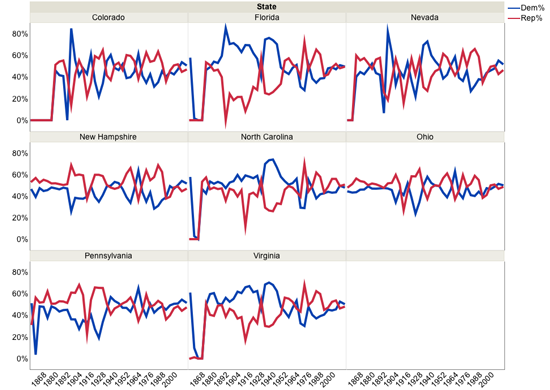 It did seem that earlier on, there were wide gaps between the winning and losing party, but all the states seemed to narrow that gap in recent history.

You can see, how over time, the margin of victory for either party narrowed significantly.

I then decided to look at each year separately. Resisting the urge to put the data on a geographical map, I chose the bubble plot instead. So here are the battleground states as they existed in 1928, shortly before the stock market crash and the Great Depression. All pretty solidly Republican. 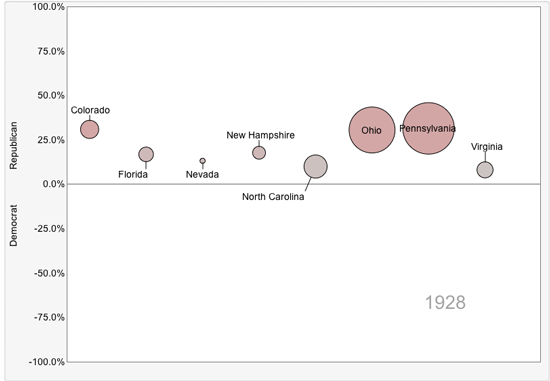 Then the crash hit, and by 1936, they were all voting Democrat. 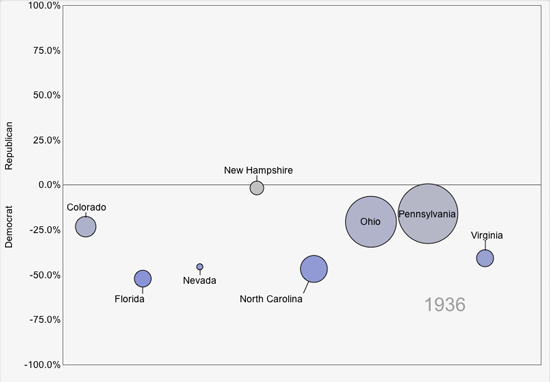 Republicans didn’t win back their hearts and votes until Dwight Eisenhower ran for office in 1952 and 1956. His status as a WWII hero propelled him into the spotlight when he was drafted by the Republican Party to run for office. 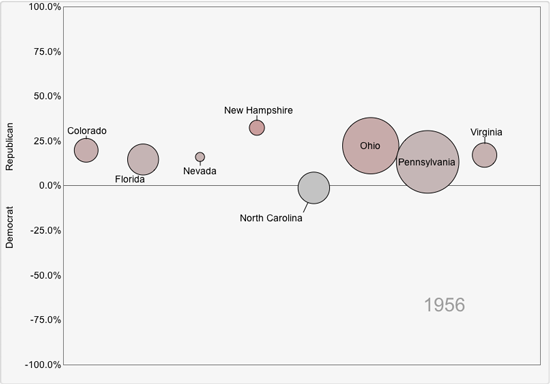 These battleground states stayed battle-free with a strong turnout for either Republican or Democrat during subsequent elections. So when did they start to become so contentious for politicians? The last election that Americans got solidly behind one candidate looks like 1988, when George H. W. Bush won the Presidency, beating Michael Dukakis. 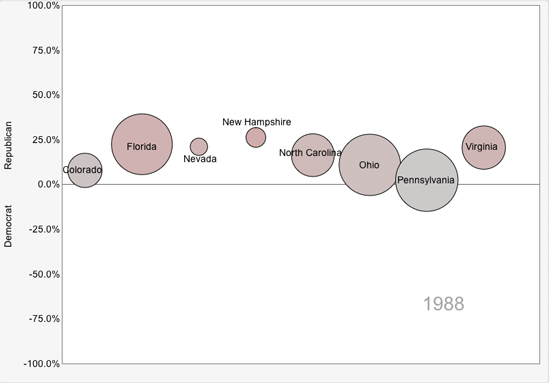 Since then, these have been tightly contested races, including the one we just witnessed. 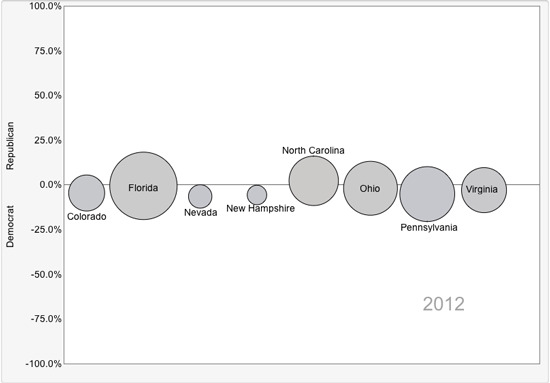 The graph below displays the data in the original trellis chart for just the aforementioned years. 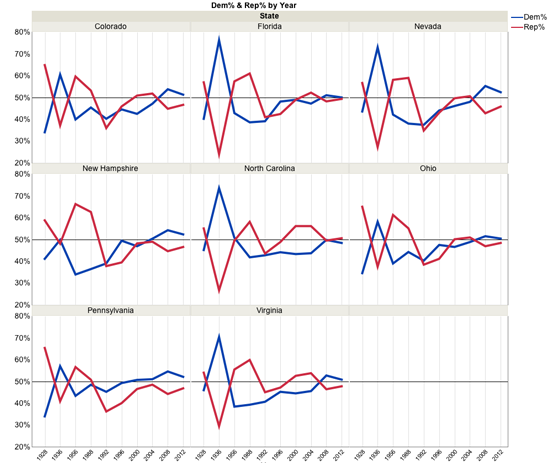 Which do you prefer? The individual bubble plot or the trellis line graph? I admit I’ve removed one of the best features of the bubble plot – motion, the ability to see how data changed over time. But even in their static form, I prefer them, for I can more easily digest the narrative with a separate visual for each election. Your thoughts? Are bubble plots less valuable when not animated?

I’ve uploaded the data table to the JMP File Exchange so that the three of you who are still interested in the election can take a look at the data table and see what you think. Let me know. (Downloading the file requires a free SAS profile.) 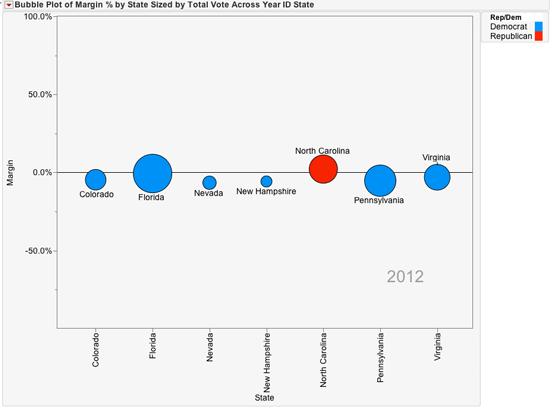 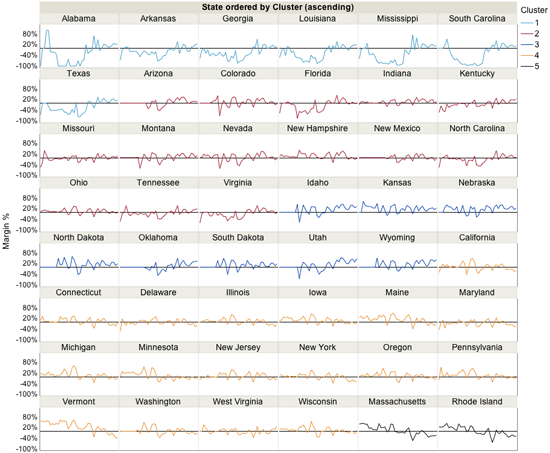 The bubble plot has one important adventatge: the size of the bobble represent the number of electoral votes of each state. This is good. But you have to improve your results in order to color the bubble by winner. Then they will be better.

The colors aren't the only indicator of the winner. What I failed to explain is that the Y axis is the margin spread. So the farther the bubbles are from the center line (above for Republican, below for Democrat), the greater the margin was for that particular winner. The colors shown become more red or blue based on how big the spread was.

Thanks for the comment and allowing me to explain further. Does it make more sense?

No, because when they are close to 0 you can not know with the bubble who wins.

I agree with Teresa, the bubble size showing the electoral votes at stake is nice but I think on the whole, I prefer the trellis plot. I only wish you had not plotted ALABAMA FIRST! as Harold Wainer would say. Can you somehow order the states by the amount by which their votes have changed parties over the years? That would reinforce your point that the Deep South states favor the Republicans in later years.

I agree, the gradient from red to grey to blue does not show the clear winner in each state. So I went back, created a conditional formula to standardize the values and assigned a 1 or 0 for Republican or Democrat win, and recreated the last graph. It shows much better. I've added it to the blog post. Thanks.

If you would like to improve the state order, you can do a cluster first and then put together the states with the same performance. Is the same that John did with houses price in JMP 8's demo.

Hmmm, interesting comments. I ran cluster analysis on the plus/minus (Republican /Democrat) margin all states going back to 1928. I then sorted by cluster number. (Alabama still comes out first â sorry Chris).

Cluster 1 groups most of the southern states together. Whatâ s interesting (but not unexpected based on the history of the two parties) is that all of them were solidly Democrat until recent years. Cluster 2, starting with Arizona, contains all but one of the 2012 battleground states. It seems Pennsylvania voted more like typically Democrat strongholds than the other battleground states have. Also, notice how Clusters 4 and 5 are practically mirror images of Cluster 1, although not as extreme. Again history confirms that when the southern states were solidly Democrat, the northern ones were solidly Republican. As ideologies of each party changed, both regions changed as well, each going in the opposite direction from each other.

So Iâ ve heard from two of the three people still interested in the election results. Iâ m sure there were three of you. Whereâ s the third person?

These charts are fabulous! Fun and thought provoking. I agree with you, I find the bubble charts easier to interpret, but paired with your description the clustered chart is the best of all. I guess I'm number three? Thanks for a great blog.

Let's propose CAUSAL effects and then test to see if you graphs and data show these assumed causal factors (I don't have the raw data yet, but you can try it).

1. The 1970's switch from Dem to Rep in South was caused by Richard Nixon...with his "Southern Strategy" to ignore enforcement of new civil rights laws, but not say so out loud (my opinion). That is when Reagen and others jumped to GOP. The switch in North to Dem was of course the Depression. But as you say, Eisenhower was popular everywhere for a while. Not sure how you can show the Nixon impact better since things became entrenched after Nixon...with the Dixiecrats moving to GOP (out of the closet?) after years of avoiding GOP as it was Lincoln's party!

Essentially, the civil war is still raging. But demographics will temper that over time as voter registration and voting processes become more efficient and unbiased everywhere. And if GOP can stop playing social conservative games, they may get the female votes back. Another opinion and assumption to be tested next decade.

Just my observation of causal effects that SHOULD show up in your graphs if we can stretch them out, aggregate them by North and South, and by Coastal vs Inland and add demographic changes as moderators. Local states have other issues of course (agriculture gifts, oil or coal gifts, military base closure take-aways, corporation relocations, etc.)