Well, another fantasy baseball season has come and gone in the Synthetic Chemicals Baseball League. I am pleased to report that the JMP Yankees have taken the 2011 title.

This eight-team league was formed in 1988, and this is the 13th championship for the JMP Yankees franchise in the 23-year history of the league. What initially started out on a napkin, scoring and tallying point totals for the ballplayers, from newspaper box scores has migrated to a sophisticated website endeavor where live scoring is available to all participants in the league.

The overall records for teams in the league for the last 11 years, since website compilation, are tabulated below: 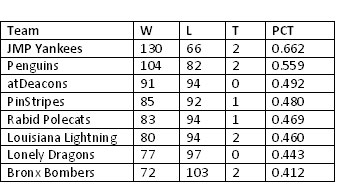 Although the technology has changed, the success of the JMP Yankees has not. In fact, since the website approach was adopted in 2001, the JMP Yankees have won six championships. This year’s MVP for the JMP Yankees was Curtis Granderson, and Cy Young belonged to CC Sabathia with an assist from Mariano Rivera.

This season did not start off so strongly for the JMP Yankees, came out of the gate with an 0-3 record in the first three weeks. But a Control Chart analysis shows a mean shift in the second half of the season compared to the first half.

A Control Chart of the season scoring for the JMP Yankees shows a process alarm on special cause test #2 (nine points in a row in a single -- upper or lower -- side of Zone C or beyond): 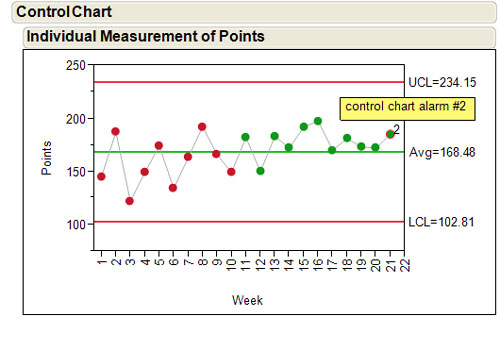 If the season is broken down into the two halves and the phase feature is used in the Control Chart analysis, the variation improvement is quite evident. I’d like to think that the manager was responsible due to his lineup manipulations over the course of the season :-)

The starting lineup for this year’s JMP Yankees was: