How old will you be when you die? This may seem like an odd question to ask, but the US Social Security system is set up in such a way that this is a question retirees need to consider. Deciding when to begin collecting benefits greatly depends on how long retirees think they will be collecting benefits.

My interest in this all started when my wife and I discussed my father-in-law’s decision to wait until “full” retirement age to start collecting his Social Security benefits. As a result of that conversation, I used JMP to explore the data, and I wanted to share what I found. I'm not a financial planner, so please note that I'm not offering advice to anyone here.

My father-in-law was born in 1953, so "full" retirement age for him would be 66 years old for him. For those of you who are not familiar with the system, Social Security offers a sliding scale of benefits depending on the age you begin collecting. If full retirement age is 66 and the monthly benefit is, say, $1,000, the scale looks like the following JMP data table: (I got the formula from the Social Security site.)

This seems like a fairly straightforward calculation. If an early death is expected (because of family history or poor health, for instance), the analysis shows it makes sense to start collecting benefits at age 62. Assuming it is financially possible to wait – and a long life is expected – the table shows that it makes more sense to start collecting at age 70. Using the same scenario as above, JMP has broken down the optimum age for benefit collection by age at death. 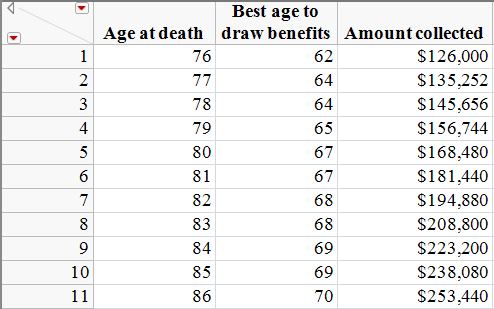 The table shows that up to the age of 76, it is in a retiree's best interest to start collecting Social Security at the age of 62. It also shows that retirees who live to 86 years old or longer should delay collecting Social Security until age 70. For retirees who die between age 77 and 86, the optimum age of benefit collection is also summarized in the table. The one thing I found most interesting about this analysis was that at no point was it best to retire at the “full” retirement age of 66, my father-in-law’s retirement age.

That calculation is pretty straightforward. But it got me thinking that if a retiree is able to wait until 70 to start collecting benefits, then there is not an immediate need for the money. That means this is really not an apples-to-apples comparison because a retiree can take the money out and invest it. If a retiree started drawing benefits at 62, but invested instead of spending the money, the graph looks different (this is assuming a 5% interest rate compounding monthly). 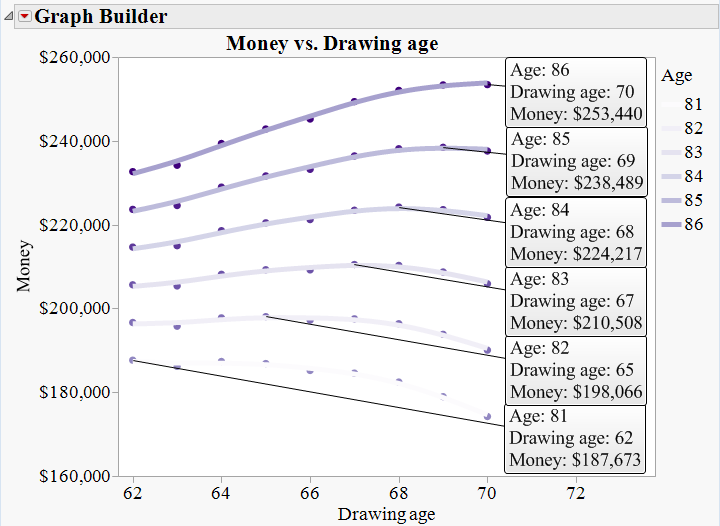 If retirees are able to invest the money, it is in their best interest to start drawing Social Security at the age of 62, if they do not live longer than 81. However, if they live to 86 or more, the graph above shows that they should delay drawing Social Security until 70. The graph also shows the window where another age besides 62 or 70 is ideal. (The line peaks at the optimal timing for each age in this window.) The window shrinks when retirees invest.

Changing the interest rate did not have a huge impact on the result. If the interest rate is between 0 and 8.75%, that just changes the size of that window. The higher the interest rate (up to 8.75%), the smaller the window. Here also we see that in no scenario was it the best option to retire at “full” retirement age of 66.

There is another factor to consider also, and that is the cost of living adjustment or COLA. The COLA is in place to ensure the purchasing power of the Social Security income is not eroded by inflation. Over the past 10 years, this has averaged 2.6%. Factoring a 2.6% COLA into the equation does not change the results dramatically. If we add the COLA to the equation above with investing, it is in retirees' best interest to start drawing at 62, if they do not live longer than 80. If they live to 84 or more, they should delay drawing Social Security until age 70.

In summary, I found that in most cases, the best ages to begin collecting Social Security benefits are either 62 or 70. For those who expect a long life into their mid-80s, the best bet is delaying until age 70 to begin benefit collection.

As one who is a year older than your father-in-law, this is useful.

I don't follow your math in the investment example. If I take $750 monthly at 5% annual interest compounded monthly, I calculate $284,510 not $187,673 in 228 months (19 years). In which case taking the money at 62 is better all the way to age 86. Checked my calculations with an internet based FV calculators and in Excel.

You are correct if you never have a need for Social Security money and can keep it invested, the math works out better for a draw age of 62 years old for longer. In my calculation, I am saying you stop collecting interest at the age of 70 years old, so only collect interest for 96 months.

Thanks I am glad you find it useful.

True and thanks for the comments

You say "at no point was it best to retire at the 'full' retirement age of 66." I suspect that optimal condition occurs if you expect to live past your 79th birthday but die prior to turning 80.

That is a great point. There is tax implications and if your social security benefit is high enough or you are still working and making over the limit of $15,720 (for 62) you get taxed 50% of your benefit above that limit. That would obviously make 62 a less desirable draw age. It is also something to consider if you are retiring later. Basically not a good idea to start drawing your social security while you are still working.