ryan_lekivetz
Staff
Creating a better iced tea with design of experiments
Apr 9, 2015 11:10 AM 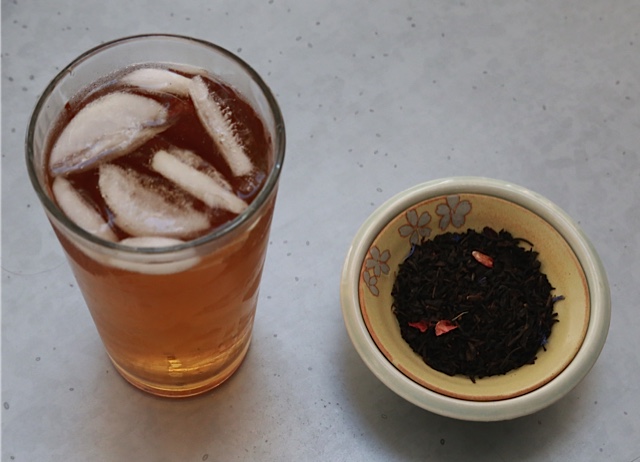 My wife is a huge fan of tea – to the extent that our kitchen has two shelves dedicated to it. For a recent family gathering, she wanted to clear out some tea by making a large batch of iced tea (i.e., to allow more room in the cupboard to buy more tea). She had served iced tea at previous gatherings to rave reviews, but wanted to try something different by making iced tea with added fruit juice after trying such a concoction at a café.

Her own attempts at fruit-juiced iced tea had mixed results, so she was nervous about making a large batch if it wasn’t going to turn out well. We were also in a time crunch – we had only one day to figure this out. What better way to spend a day off than running a designed experiment?

For this experiment, we used what we had on hand at home to create an iced tea that (hopefully) tastes good enough to serve to guests. While I couldn’t promise my wife that we’d find a usable recipe, I was confident enough that I convinced her to be the official taste-tester. The factors we considered:

We knew that the final tasting would be done with a Styrofoam cup, so in theory there’s almost no limit as to how many cups she could taste. However, even taking a few sips at a time, we didn’t want to overwhelm her with too many choices. We decided on 16 cups as a reasonable number to use.

We also realized that in order to make a batch of tea in a teapot and let it cool posed a limitation in the number of containers/space we had available, so we went with eight batches of tea – i.e., 8 whole plots. Each of these batches would be used for 2 cups of iced tea, for a total of 8*2 = 16 cups (i.e., runs).

We wanted to measure the taste, but how could we differentiate between the 16 cups of tea? We could try a forced ranking, but there may be subtle differences that would make it difficult to distinguish, and large gaps may exist between the good-tasting and bad-tasting teas. The nice thing is that she can take small sips, so it’s easy enough to taste everything more than once before deciding. In the end, we laid out a tape measure on the table, with my wife placing each cup somewhere on the tape measure relative to how it tasted compared to the others. The worst would be 0, best would be 10, and all other scores based on their final placement.

We decided each batch of tea would be made with 2 cups of water. All the teas were chilled in the fridge so they had the same starting temperature. Each Styrofoam cup would end up with one cup of liquid (tea and juice mix).

Below is what my Factors Table looks like (note the first four factors are hard to change) in the Custom Designer.

I created the design using main effects only, and in the Design Generation outline, I specified 8 whole plots (batches of tea), and 16 runs (cups of tea).

I created the design using main effects only, and in the Design Generation outline, I specified 8 whole plots (batches of tea), and 16 runs (cups of tea). 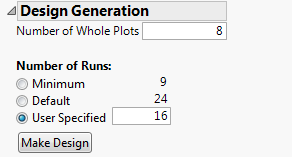 Check back tomorrow for my next post, in which I'll reveal the results of this experiment.

Is there any special way you like to make iced tea? Leave me a comment below and let me know.

Very nice and simple application of DOE and the learnings have real significant practical application. Everybody in my region of the country loves good iced tea!

We've gained a real appreciation for sweet tea since moving to North Carolina. Thanks for the kind words, and thanks for reading!

Thank you Ryan for sharing this nice use of DoE!

I loved reading it and will try soon a similar study, so please give us also the rest of the story.

Part 2 with the results should be posted in the next few days. I look forward to hearing how your study goes too!

Blindfolded replicates would be interesting, and randomization of test order between replicates.

We can see many ways to turn this into a major neighborhood event, videotaping for u-tube.

Are you sure the factor tee amount, juice proporton and sugar are continuous? I am not sure. With two values you can not say that this is continuous.

How will change result if you consider that factors as categorical.

Great suggestion! In hindsight, at the very least it would have been nice to have a few replicate runs for some pure error.

Good catch. In the two-level case, the continuous and categorical enter the design and model in the same way with the -1/+1 coding. By treating them as continuous, I may want to explore the range a bit more in an augmented design either by changing the range or adding higher-order terms.